PGA Championship 2017: Is this the weekend Rickie Fowler gets his major? A few reasons to think it is 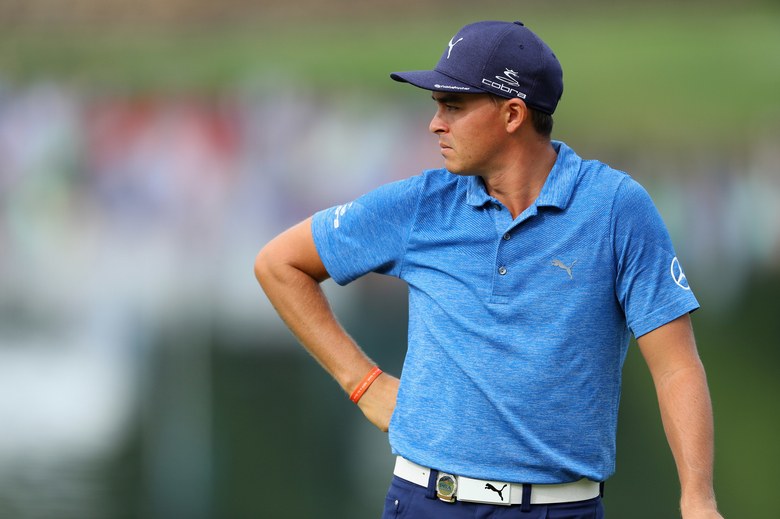 By Dave Shedloski
Emerging from the clubhouse at Quail Hollow Club Friday afternoon after a post-round television interview, Rickie Fowler pulled his cap down low over his forehead so that he had to tilt his head back to see where he was walking. He playfully bounced off of a couple of reporters like he was a pinball as he made his way to the podium to meet with a larger media contingent.

If Fowler is feeling the pressure to win his first major championship, he isn’t showing it much through the first two days of the 99th PGA Championship.

Winning isn’t easy when you’re popular, though Tiger Woods and the late Arnold Palmer managed just fine. Fowler is easily one of the biggest draws in golf today—and has been since he turned professional in 2009. He wore colorful clothes, exuded coolness with his mop of hair blooming under a flat-billed cap and connected with young fans.

Since then, he’s been trying to build a résumé to catch up to his renown.

A victory in one of golf’s four majors would speed up the process, but Fowler arrived at Quail Hollow Club still searching after 31 starts, and the pressure is only building after desultory efforts in the final round of the Masters and U.S. Open. In the former, he was one off the lead and playing in the penultimate group with Jordan Spieth but cratered to a 76. And at Erin Hills, after holding the first-round lead with an opening 65, his ho-hum 72 on Sunday was no match for the surge of Brooks Koepka.

Fowler shrugged off the disappointment at the U.S. Open a bit too casually for some observers, who wondered if the California native lacked killer instinct. But perhaps that was a misread. Perhaps Fowler has a better poker face than he’s given credit for or has a coolness that’s difficult to detect under that hip veneer.

Whatever the case, Fowler outplayed World No. 4 and four-time major winner Rory McIlroy and hot-shot youngster Jon Rahm over the first 36 holes at Quail Hollow, posting a relatively stress-free 70 to again put himself in contention. At three-under 139, he trails Kevin Kisner by five strokes, but only a handful of players stand in front of him.

Whether he is ready to come out on top this week will be revealed on Sunday. But Fowler, winner of seven pro titles, including the 2015 Players Championship, appears more comfortable with the pursuit, frustrating though it may be.

“I got to that point when I finished top-five in all four majors and felt good there,” Fowler said, referring to his 2014 season. “Kind of at a standstill [since then]. This year I feel like it’s been a new level of how comfortable and how good I felt in the majors. It’s been a fun year. Definitely a big improvement from where I was last year in the majors.”

A pro golfer’s mantra is to keep creating opportunities. Jack Nicklaus won 18 majors because he was great and also because he was consistently good, with 19 seconds, 10 thirds and 73 top-10 finishes in the majors. Fowler has seven top-10s thus far, not a bad percentage. But as CBS Sports broadcaster Gary McCord said after Fowler fell short at the U.S. Open, “He’s 28 and he needs to win a major, and it doesn’t matter how he does it. He’s at a point where that’s what people expect of a player of his caliber.”

Even though he fell short at Erin Hills and Augusta National this year, he has extracted more lessons from the experience, and he is putting it to use at Quail Hollow.

“The big thing is staying patient, not getting ahead of ourselves and not trying to get too much out of it,” said Fowler, whose only decent finish at the PGA was T-3 in 2014 at Valhalla. “Just kind of accepting the golf course and working our way around, managing it well. It’s different than a normal tournament especially when you come to this venue with how tough it’s playing. You can say you played defense a little bit, but it’s not exactly like you are playing scared out there. You are playing smart and picking your way around the golf course.”

His patience was most tested during his first-round 69 that was marred by a mental mistake that cost him a triple bogey at the par-4 fifth hole. It erased two early birdies, but he didn’t allow that small calamity to become a larger one. He moved on.

That takes a certain grit. And a certain calmness, too.

And that is what Rickie Fowler is exhibiting so far this week.

“It being hot, tough course, it’s going to take a lot out of you mentally. There is no reason to waste any extra energy,” he said of his tranquil demeanor. “It’s a long week. It’s a major and, like I said, it’s a tough venue. Plenty more stuff out there to drain you. I’m going to keep it mellow and relaxed like it’s been the first two days.”

Indeed, experience tells him you can’t win if you’re losing it.