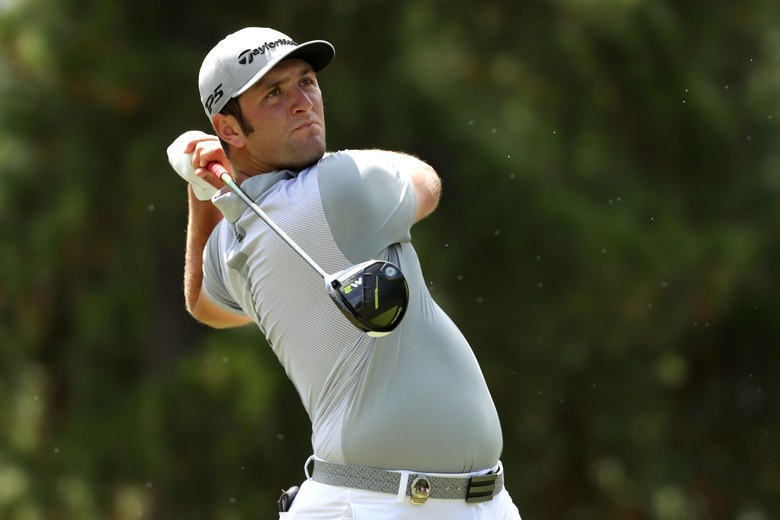 By Joel Beall
Jon Rahm has been a pro for 14 months. Let that marinate for a second. Just 22, with two worldwide wins on the season, he is making his tournament debut at the PGA Championship. Got it? Exhale.

As noted earlier this week, golf’s hype machine can get overheated. An opinion embodied by Rahm. With his victory at Torrey Pines—along with a handful of impressive outings at Pebble Beach, Phoenix, Mexico and Austin—many liked Rahm to break the Masters’ rookie slump. Those prospects were amplified at Erin Hills, its length, open confines and elevated greens seemingly suited to the Spaniard’s game. Same goes for Birkdaleafter he took Ireland by storm.

Yet, with one day of major-championship play left in 2017, it’s safe to say those major ambitions were overzealous, as Rahm needs a Sunday charge just to record his first top-25 major finish as a professional.

As conveyed above, this is not a knock on Rahm’s campaign. It’s been one of passion and fire and excitement. His game—yes, the distance, but a feel and creativity around the green that’s a throwback in every sense—is a welcome addition to the growing list of young marquee players having success. But those attributes alone don’t make a complete golfer. Patience, consistency, maturity and fortitude are just as vital, facets, noted in multiple incidents, that remain a work in progress for Rahm. We were reminded of these sentiments, both good and bad, on Saturday at Quail Hollow. The two-time Ben Hogan Award winner at Arizona State had the round of the day going, five under through 14 holes as he stood on the gettable par-5 15th. But his approach went 40 yards left of the hole, with a poor ensuing pitch leading to a six.

If he harbored any temper—one of Rahm’s noted vices—he didn’t show it on the 16th tee, blasting his drive 320 yards down the pipe. Yet his second shot sailed left into the drink, en route to a double bogey. And though he played the par-3 17th without incident, it appeared Rahm was running hot on the final hole, emotions that led to a flubbed chip and another three-putt.

The final damage: three 6s on the final four holes, erasing that five-under start to an even-par round. A day that showcased Rahm’s promise, as well as the road ahead.

“I keep accomplishing things, and maybe I’ve put too much pressure on myself,” he said on Friday. “Or maybe it’s just a few weeks I’m going to play bad a year, and it happens this year to be the majors.”

For all that’s been made about his emotional outbursts, Rahm has showed improvement in this area, albeit still flaunting a fair share of club slams throughout the week. Of greater concern has been Rahm’s conditioning, looking gassed at the end of his rounds. An observation backed by stats this week: his average was four strokes higher on the back.

Rookie walls are common, and his future remains as bright as it did in March. But Rahm’s major performances are a reminder that, at golf’s biggest stages, talent is not enough.

“It just means the best is yet to come,” Rahm said on Friday. “I choose to be positive about it.”