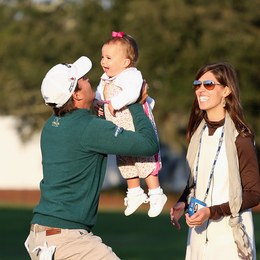 It’s hard to imagine how we’d handle sitting on an overnight lead at a major. The nerves, the unavoidable pressure – particularly given the late tee time with all morning to think about what’s at stake.

As Kevin Kisner divulged in an interview before teeing off as a co-leader at the PGA Championship on Saturday, Kisner keep it ordinary by hanging out with his daughter, Kate.

Here’s Kisner discussing his fatherly morning with Amanda Balionis ahead of his third round:

Amanda Balionis catches up with co-leader Kevin Kisner ahead of his #PGAChamp round Saturday! pic.twitter.com/ZwDS3AJMvh

Just another reason to like Kisner, who’s seemingly just a regular guy (except that he’s a lot better at golf than you or me).