PGA Championship 2017: Kevin Kisner leads by one over Chris Stroud and Hideki Matsuyama 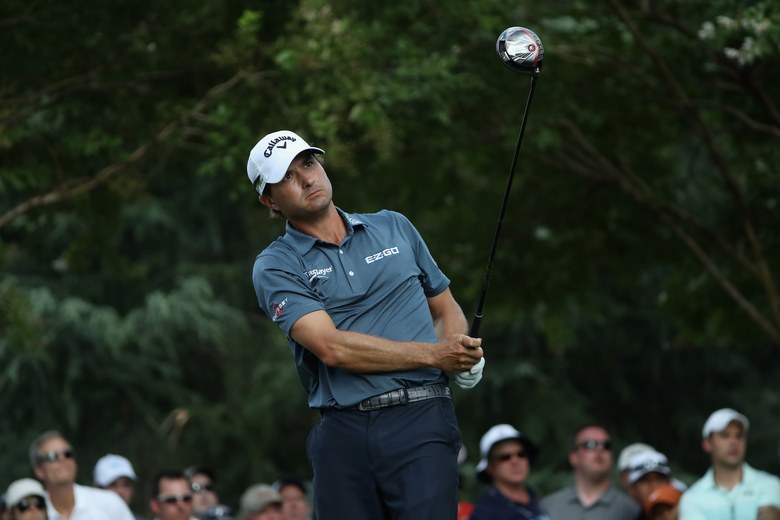 By Christopher Powers
If you asked Kevin Kisner if he would be happy with a one-over 72 on moving day at the PGA Championship, he’d almost certainly tell you no. But that’s all he needed on Saturday at Quail Hollow, which played as challenging as it has all week with its lightning quick greens and treacherous pin positions. The two-time tour winner leads by one stroke at seven-under 206.

Kisner, 33, was unflappable through 11 holes of his third round, playing them in one under without making a bogey. That’s when things got interesting, as he dropped his first shot of the day at the par-4 12th. He bounced back with two birdies at the 14th and 15th, but then made his worst swing of the day on his approach shot at the opening hole of the Green Mile. The former Georgia Bulldog hooked one into the water on the left and walked away with double-bogey. He went on to par the 17th and bogey the 18th.

It’s not how he wanted to finish, but it was good enough for the 54-hole lead at the PGA Championship. He’s one solid round away from capturing his first major championship.

RELATED: Kevin Kisner prepared for his round Saturday by doing regular dad stuff

One back are Chris Stroud and Hideki Matsuyama at six-under 207. Stroud, fresh off a win at the Barracuda Championship, carded an even par 71 that featured four birdies and four bogeys. He’s become the Cinderella story of the week, but that doesn’t seem to bother him. After the round, the Texas native said he was as calm as he’s ever been.

Matsuyama, who posted the round of the week on Friday, was never able to get anything going in his third round. The five-time tour winner made just one birdie to go with his three bogeys for a two-over 73.

One of the biggest moves came from Justin Thomas, who posted a two-under 69 and sits at five-under 208. After going out in even-par 35, the four-time PGA Tour winner took advantage of the par 5s on the home nine, making birdie on both and coming in in two-under 33. It’ll be a much different spot for Thomas than he was in at the U.S. Open, where he played in the final group on Sunday and ended up finishing in a tie for ninth. He’ll have a chance to flip the script on Sunday in Charlotte and come from behind to capture his first major victory.

Also at five under is South Africa’s Louis Oosthuizen, who posted an eventful even par 71 that featured three birdies, two bogeys and a ridiculous par save at the par-4 second. The 2010 Open Champion can add a second major championship to his resume with a low round on Sunday. It’s hard to believe it hasn’t already happened for him, with second place finishes at the 2012 Masters, 2015 U.S. Open and 2015 Open Championship.

Thanks to a late charge, Grayson Murray finds himself just four off the lead at three-under 210. The PGA Tour rookie caught fire late in his round, making a birdie at the par-3 13th, an eagle at the par-5 15th and another birdie at the par-3 17th. Unfortunately, he bogeyed the 18th, but still turned in a two-under 69.

No one exploded quite like Graham DeLaet did, though. After making double-bogey at the 11th to fall to four over for the championship, the Canadian went on a stretch of birdie-eagle-eagle-birdie that included a near ace on the par-4 14th. He carded a three-under 68 and sits at two-under 211 for the tournament.

Rickie Fowler had a solid round going for 15 holes, but finished the Green Mile four over to post a two-over 73. He’s seven back at one-under 212.

Like Fowler, Jason Day crept up the leader board, but made a devastating quadruple-bogey-8 on the 18th hole to finish with a six-over 77, which saw him drop all the way to even par 213.

RELATED: Get control over your irons like Kevin Kisner