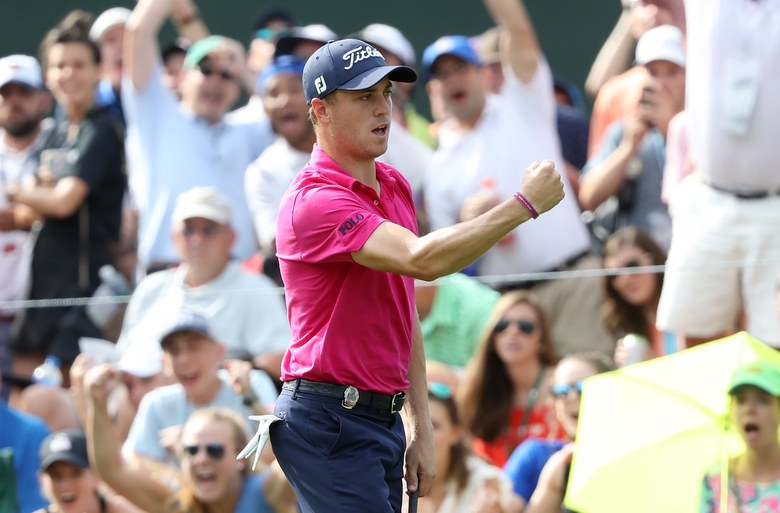 By Christopher Powers
Before he even hit his first shot at the PGA Championship, Justin Thomas had already produced the best season of his career in 2016-2017. The 24-year-old won three times, shot a 59 and made over $5 million. If he wasn’t in the player of the year conversation already, he became the favourite to win that award on Sunday at Quail Hollow, carding a final round three-under 68 to capture his first major championship victory.

Thomas began his round by holing a 14-foot bogey putt at the par-4 first that gave him a bit of momentum, which he used to make a birdie at the second. After another bogey at three, he really settled in, adding birdies at the seventh and ninth to turn in two-under 34. At the par-5 10th, he provided what will be the lasting image from his win, a birdie putt that hung on the cup for nearly 10 seconds before finally dropping. Three holes later he produced another roar from the Charlotte crowd, chipping in for birdie at the par-3 13th.

After two straight pars, Thomas appeared to flinch on the opening hole of the Green Mile, but instead made an excellent sand save to stay at eight under for the championship. Then he took dead aim at the par-3 17th, leading to another birdie. He struggled on the 18th, but a bogey was all he needed to finish at eight-under 276, two clear of the field.

Finishing two back in a tie for second at six-under 278 were Patrick Reed, Francesco Molinari and Louis Oosthuizen. For Reed and Molinari, it’s their best finish in a major championship. For Oosthuizen, it’s another unfortunate close call, giving him his fourth second place finish in a major.

Rickie Fowler made a late charge, but it was too little, too late. The four-time tour winner made four straight birdies beginning at the 12th hole and then three pars at the Green Mile to post a four-under 67 and finish at five-under 279. He’ll have to wait until April for another shot at his first major championship.

Also finishing at five under was Hideki Matsuyama, who carded a one-over 72 on Sunday. He now has six finishes inside the top-7 in majors.

The biggest mover this weekend was Canada’s Graham DeLaet, who played the final 36 holes in five under par. His final round two-under 69 put him in a tie for seventh, which is his best career finish in a major.

Jason Day finished at one-under 283 after carding a final-round one-under 70. The T-9 finish now gives him five career top-10s at the PGA Championship.

World No. 1 Dustin Johnson shot a four-under 67 to finish at even par 284. It’s hard to believe, but the the T-13 finish is his best in his last four major starts.