PGA Championship 2017: Justin Thomas is five shots back but hardly out of contention. Just ask him 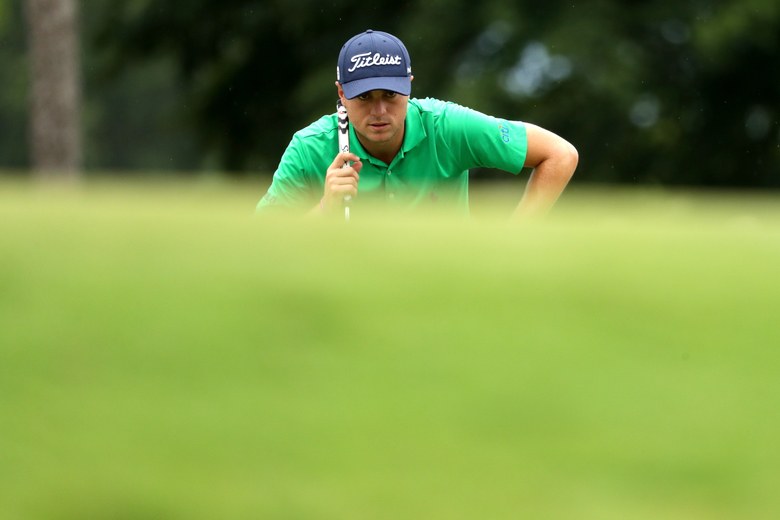 An opening-round 73 at the PGA Championship on Thursday was hardly the way Justin Thomas wanted to start the year’s final major. But bouncing back with a five-under 66—tying him for the low round thus far at Quail Hollow Club—and leaving him just five strokes off the lead of Kevin Kisner and Hideki Matsuyama, suited the 24-year-old just fine.

“I definitely worked on driving after I played yesterday, just trying to get it in the fairway, playing the par 3s better,” Thomas said. “I did both today so that was nice. … Got myself back in the tournament.”

It’s safe to say that Thomas’ 2017 major season has been eventful, if not altogether satisfying, particularly considering the heightened expectations that came with his three early PGA Tour wins. A T-22 finish at the Masters felt OK given his 71-70 weekend showing. And then came the impressive third-round 63 at the U.S. Open, which put him in the final group on Sunday at Erin Hills. But a closing 75, which dropped him to T-9, would change his perspective.

His experience at the Open Championship was arguably even more disappointing. After an opening-round 67, Thomas shot a Friday 80 that caused him to miss the cut at Birkdale.

Thomas insists he left his frustration behind back in England, but the slow start here at Quail Hollow suggested otherwise. A birdie on his final hole Thursday allowed Thomas to gain a little momentum, which continued with solid practice on the range in the afternoon.

Sitting five strokes back at three-under 139 (the same score as good friend Rickie Fowler, who he looks like he might be playing with on Saturday), there is work to do. Still, Thomas is confident that he’s still positioned well to be a factor over the weekend. How confident? Well, take a listen:

“I can make up five shots in nine holes, let alone 36 holes,” Thomas said. “I mean, there’s lot of things that can happen. I have to play great but we’re only halfway through. A lot of golf to be played, but I’m in a definitely good spot.”