PGA Championship 2017: Jimmy Walker’s title defense isn’t playing out at all like he imagined 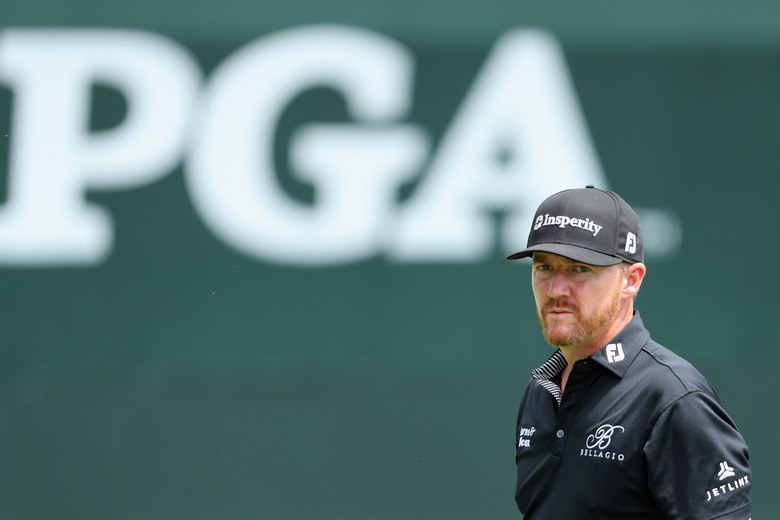 By Jaime Diaz
In the year since his greatest triumph, Jimmy Walker has hit a lull. One that has left him—hopefully only temporarily—in limbo.

When the then 37-year-old Walker won the PGA Championship last August at Baltusrol, in wire-to-wire fashion with rounds of 65-66-68-67, it was the culmination of well paid dues. On and off the minor tours for several years, Walker finally made it to the PGA Tour to stay in 2007. But after seven years as a winless journeyman, he got his first victory in 2014, and then five more in quick succession. That the last was a major championship made the lean, 6-foot-2, sweet-swinging Oklahoman appear a classic late bloomer ready to move into the ranks of the game’s elite.

“I feel like I can do it. I can do it now. I can win a major championship,” Walker said after winning by a stroke over Jason Day last July. It was a mindset greatly fostered by the encouragement of swing coach Butch Harmon, who persisted in breaking Walker’s lifelong habit of underestimating himself. “For me, it was a matter of time,” Walker said. “That’s what I needed to feel about myself to win something like this. It sure makes me look forward to more.”

But Walker hasn’t won since. In 19 events this year, he has only one top-10 finish and seven in the top 25. He’s sit 98th on the FedEx Cup points list entering this week at Quail Hollow Club.

The post-major winner blues are not rare in the pro golf, but Walker, well known as a hard worker who enjoys playing the game even during off weeks, did not seem a candidate. The problem, discovered after months in which he had exhibited flu-like symptoms, has been Lyme Disease.

Walker was diagnosed several weeks after he believes he was bitten by a tick during a hunting trip in November. Besides the physical symptoms of fatigue, he became more irritable on the golf course, causing him to lose his composure and concentration. There is no definite prognosis on when the disease will run its course, and no guarantee that it ever will.

The months of uncertainty and disappointment have given Walker an admittedly glum outlook. As he met the media Tuesday as the PGA defending champion, he tried to sound optimistic, but couldn’t pretend that he’s not tired of being tired.

“I mean, you get that sensation that like Wow, I’m really falling back,” he admitted.

He’s developed a practiced fatalism. “We’ve just taken the mindset that it is what it is,” said Walker, using one of Tiger Woods’ pet phrases. “I’m not worried about the golf or the game. Doing what we did last year, being able to win this tournament and set yourself up for basically the rest of your career is just a nice—it’s a huge relief.”

But Walker, given the effort he gladly expended to get to the top, doesn’t really do complacency.

“The competitor inside you, it’s kind of hard to take when you can’t get out there and get going,” he said. “I know everybody takes time off from work, but I really don’t. I enjoy coming out and playing and competing, and when you can’t do it at your best, it’s tough. You’ve kind of got to give yourself a little bit of a break, which is hard to do, and I’m working hard on it.”

Last week at the WGC-Bridgestone Invitational, Walker led after 36 holes after rounds of 68 and 65. But he shot 74-72 on the weekend and dropped to a T-28 finish. Nevertheless, he took heart from the extra mental effort he put forth to fight the still mysterious malaise that Lyme can bring on.

“You know, I really tried to concentrate—sounds stupid—but extra hard last week. You know, try harder,” Walker said. “But it just kind of comes and goes. I just try to be 100 percent committed on every shot and see it and feel it and then try to execute it. It’s really hard to describe. It’s hard to quantify what happens, and is that why it’s happening. It’s a weird deal. I just keep plugging along.”