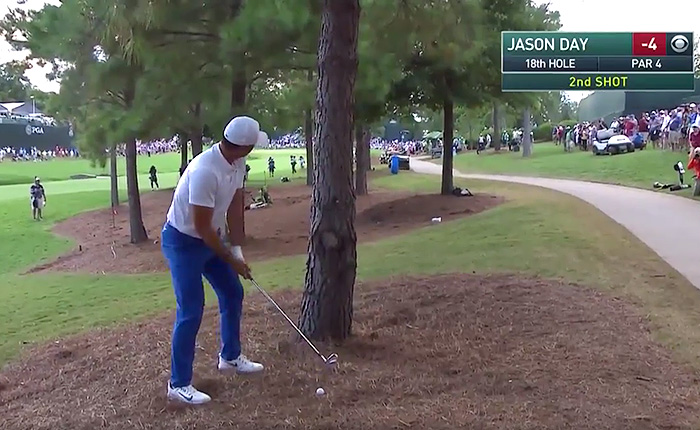 By Stephen Hennessey
Jason Day was very much still a factor in this PGA Championship, just four shots back of leader Kevin Kisner, until he tried to play a hero shot at the 18th hole. The result? A quadruple-bogey 8 that leaves him with a difficult challenge come Sunday at Quail Hollow.

The critical error was the second shot on the par-4 home hole. Following a drive into the pine straw to the right of the fairway, Day tried to play a rope hook from the right of the trees and let it draw back toward the hole. It would’ve been a miraculous shot, and Day had a clear angle to pitch back into the fairway if he was looking for an alternative. Louis Oosthuizen had just done the same thing and saved par ahead of him. But J-Day didn’t know that.

But Day went for broke, and it cost him.

Day’s foot slipped out on his second shot, so his ball nailed a tree limb and came to rest in a bush.

Forced to take an unplayable, Day then had to hit a flop shot over a bunch of trees for his fourth shot.

No bueno. From the rough, Day chunked his fifth. The result? A snowman that puts J-Day at even par with a six-over 77, and leaves him seven shots back of Kisner.

A quadruple bogey on the 18th for Jason Day drops him to even heading into Sunday's final round #PGAChamp pic.twitter.com/VygCBOXKII

After the round, Kisner admitted he had no idea what score Day made after he holed out, so he had to find out since he was keeping Day’s score.

The frustrating part? Day had rallied with three straight birdies on the back nine (14, 15 and 16) after making a double bogey and bogey on the previous holes. He was battling the pulls with his driver all afternoon, but seemed to have figured things out. But it was all negated with the implosion on the 18th.

Worst of all? In the process, he made his wife very upset, too. That’s never a good thing.

Oh my heart hurts. And I am melting. Golfffff. ??