PGA Championship 2017: How our expectations are overwhelming—and failing—golf’s stars 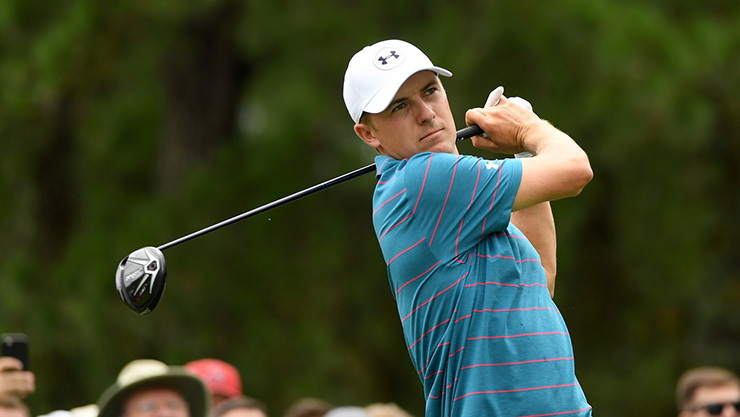 Throughout PGA Championship week, fans will hear a variation of the following: Jordan Spieth is on the edge of golf immortality. It’s recognized as truth, and rightfully so: winning the Wanamaker Trophy would put the 24-year-old in a class of just six.

However, if that sentiment sounds familiar, well, it should. It’s a bell rung multiple times the past few years; hell, the past few months. The only variable has been who we’re talking about.

In April, that spotlight centered on Dustin Johnson. The then-reigning U.S. Open champ strung together a remarkable four-tournament stretch, winning three times in the process. Coupled with his 2016 campaign, it had media and fans handing DJ the green jacket before arriving to Augusta. Unfortunately, a staircase intervened, and now the guy who seemed like a lock to win one, if not multiple, major titles enters Quail Hollow without a top 50 finish at a major this season.

Prior to that, it was Justin Thomas, he of three wins before February, with a 59 posted for good measure at the Sony Open. His performance led some to say that Thomas had surpassed his buddy Spieth as the superior player. Since his winter explosion, however, Thomas has posted just a handful of top-10s, and you’d be hard-pressed to find anyone asserting “Thomas over Spieth” now.

We’d be remiss in forgetting Rory McIlroy, whose impressive performances at the Tour Championship and Ryder Cup spawned fawning tributes that doubled as fan fiction. While he is the PGA Championship favorite this week at Quail Hollow, those “Year of Rory” forecasts for 2017 have not aged well.

This is problematic, for when something is on the precipice of history, its light is dimmed by the previously employed hyperbole. And it’s only getting worse: Every tournament win has to be a revelation, a breakout, a sign of something special. If Matsuyama wins this week, someone will make the myopic take that the fledging star could surpass Gary Player as the greatest international player ever, a perspective that will assuredly result in a 1,200-word open letter from the Black Knight himself.

So why does golf feel the need to paint its stars with unrealistic—and often fleeting—superlatives? 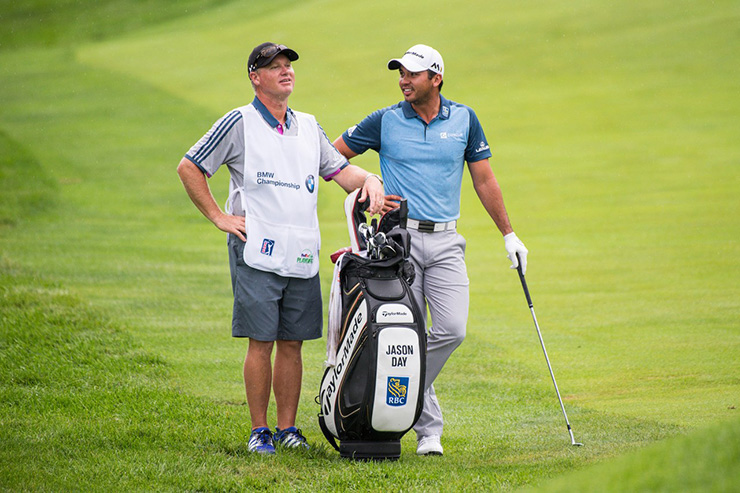 Recency bias partly fuels this flavor-of-the-month mentality, one that’s new to the sport (although not exclusive to it). Winning a tournament—not just a major, but any event—used to solidify a player’s standing for an entire year, maybe longer. In present time, you’re only as good as your last performance. To wit: Day has won eight times since the beginning of 2015, an amount that constitutes a great career. Yet, because he hasn’t found paydirt this season, he has become persona non grata at Quail Hollow.

This somewhat stems from Buzzfeed-ification of society: Everything now has to be the “best” or “greatest.” There’s little room for nuance, middle ground or context. Rationality doesn’t equate to retweets, the bottom scroll or a clickable headline. It’s why Spieth’s winning bunker shot at the Travelers Championship wasn’t just a memorable moment, it was “ONE OF THE MOST CLUTCH SHOTS YOU’LL EVER SEE.”

That modern news cycles have become frighteningly compressed hasn’t helped. What you think matters now will be second-page news tomorrow and forgotten the day after that. As a result, we tend to be a little looser and more negligent with our language, hoping to grab whatever ephemeral attention possible. What used to be saved for the supernatural now applies to the not-too-shabby.

To some degree, that’s fine, especially if a major or top-tiered event serves as the barometer of success. Where this runs off the track is when the CIMB Classic or CareerBuilder Challenge is used as a prism for greatness. These spots on the calendar can be, and are, exciting, but with 40-odd tournaments a year, a heavy dose of level-headedness is needed. If not, something gets lost in translation. This is particularly true when a player “fails” to reach the unrealistic bars we’ve set, evidenced by Spieth’s follow-up to his historic 2015. “It’s been tough given I think it’s been a solid year and I think had last year not happened I’d be having a lot of positive questions,” Spieth said at Troon last July, when asked about his “struggling” performance. “Instead most of the questions I get are comparing to last year and, therefore, negative because it’s not to the same standard.”

For all the discussion about Spieth bouncing back from his miscue at Amen Corner, perhaps of greater consequence was fending off such constant, fatalistic notions from seeping in. As he rightfully avowed, he was having a good year in 2016: two wins at the time, with a third coming at the Australian Open. But because he was falling short of expectations—maybe not his, but definitely ours—a boon year for most was considered a bust. It’s the type of nonsense that, no matter one’s fortitude, eats into your soul.

That’s the upshot of extolling easy ovation: If they’re not ready for the build-up, the fall becomes that much more severe. 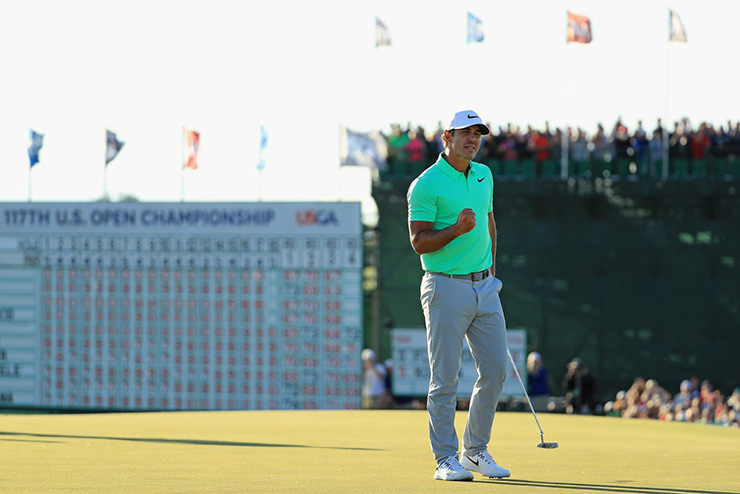 This is not a knock on hype. It’s a good problem to have, your sport surrounded in excitement. That the game is inundated with such young, engaging talent that instils this reaction is a marketing department’s dream.

And some of this praise is warranted. We should be in a frenzy over Spieth’s Birkdale finish, Thomas’ 63 at the U.S. Open, Rahm’s emergence, what DJ and Rory do with their drives. If we can’t get jazzed about that, what’s the point of watching in the first place?

Nevertheless, without the proper framework, that passion can be corrosive. With great play comes great expectations, sure, especially with players finding success earlier than ever. But rather than staring into the future, fans—and frankly the media—need to stay in the present.

A perfect illustration is Brooks Koepka, a player whose promise has made fellow players, social media—and yes, us, the golf media—salivate at what could lay ahead. Overpowering tee balls, soft touch around the green, the Clint Eastwood demeanor. How can you not get behind this cat? His win at Erin Hills was a validation, the bite finally living up to the bark.

And yet, if we step back, Koepka has two wins on the PGA Tour, a total topped by Webb Simpson when he grabbed the U.S. Open at an earlier age. If your currency is excitement, it’s no contest between the two. But to many, victories remain the ultimate standard.

This is not a slight to either’s game or draw. It’s merely a reminder that the “generational talent” hoopla that’s laid at the feet of Koepka, Rahm, etc. fails to keep context in check. 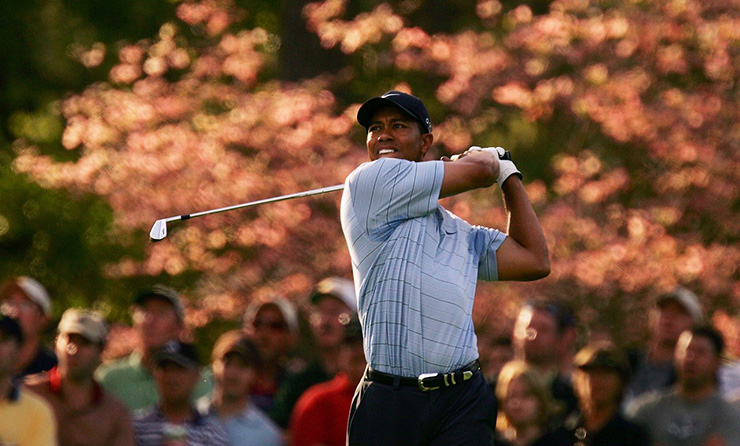 Is Tiger Woods’ career a success or failure? A rational person would yell the former, and they’re unequivocally right. If he never tees it up again, he’ll finish with the second-most majors and second-most tour wins. By any metric or observation, he’s one of the three best players to play the game. Perhaps more importantly, only Arnold Palmer can rival Woods in societal impact.

But, if only for a millisecond, you might have marinated on the latter, and a logical counter could be made. At an age when most golfers hit their prime, Woods fell apart, betrayed by his body, hubris and privilege. Judging by his past, the future should have been so bright. His recent shortcomings only sour that inflection.

That’s the fallacy of expectations. Instead of enjoying Tiger’s career for what is was, we often reflect on what it was not. As he becomes less of a player and more a figurehead, that could possibly change, with admiration and respect drowning out the lamentation. In that same breath, as we’ve seen with athletes like Ken Griffey Jr., Bo Jackson and Grant Hill, that “what if …” wonderment never totally recedes. And it’s a disservice to their legacy.

Expectations will always abound; some are unavoidable. Which is why we need to be careful in casting ambitions on our stars. There’s not a dominating figure like Tiger or Jack in today’s landscape, the game’s depth too great to allow the spotlight to shine so bright on one entity. But, when a player does have his turn with the proverbial conch, let’s turn the volume down, if ever so slightly. For the spotlight will eventually move. Enjoy their time in it, however long or brief.