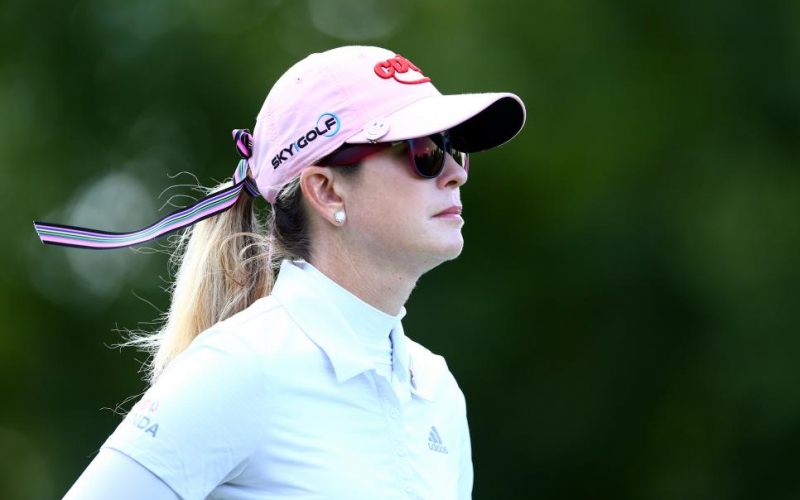 By Kent Paisley
The Pink Panther, Paula Creamer, is returning to the LPGA Tour after an 18-month hiatus. Creamer has entered the field at the Pure Silk Championship at Kingsmill Resort in Virginia later this month with the intent to resume her LPGA career.

The 34-year-old, 10-time winner hasn’t played on the LPGA since the BMW Ladies Championship in October 2019 for two reasons, according to her agent. Creamer was conscious of the COVID-19 pandemic, only leaving her Windemere home to take a few trips to see her family. Additionally, her doctors advised giving her surgically repaired left wrist additional time to heal.

In September 2017, Creamer underwent season-ending surgery on her left hand. She returned to action the following March, but continued to have trouble the next two years. After taking the lead during the first round at the 2019 Evian Championship, her play noticeably dwindled. She finished T-55 and missed every cut in her remaining starts that had a cut. It culminated with a WD at the Volunteers of America Classic after missing five cuts in a row. After two weeks off following her WD, she played two events, the Buick LPGA Shanghai and BMW Ladies Championship.

In 2020, Creamer was hoping to start playing again. However, in the midst of the pandemic, her medical team told her she had no reason to pick up a club. When the LPGA announced that status from 2019 would carry over into 2021, her team did not apply for a medical extension. She has category 11 status from finishing 91st on the official money list in 2019, guaranteeing her status for the entire 2021 season.

Creamer focused instead on rest, not touching a club until January 2021.

The break has granted a reprieve for Creamer. It’s the first time she has been pain-free in a long time. Her wrist feels healthier than it has since 2010.

Creamer reconnected with her old coach David Whelan in late 2020 to get ready for tournament play again. Creamer last worked with him in 2018. He coached Creamer when she was at the IMG Academy as a teenager in the 2000s.

Creamer recently tested out her game competitively after a couple of months of practice. She played two events on the National Women’s Golf Association in late March and late April. Her last start was April 20-21 at Hawks Landing Golf Club in Orlando, Florida, where she shot one over for the two day event.

She debated starting earlier in the 2021 season, but settled on Kingsmill, where she finished second in 2012, losing a playoff to Jiyai Shin on the ninth extra hole. Creamer anticipates playing full time from now on.

With Olympics on her mind, Inbee Park takes her 21st LPGA title in Kia Classic

Our takeaways from the final round of the Valspar Championship.