All in the Family

Paul Thomas, Justin’s grandfather pro, relishes a win he could only dream of 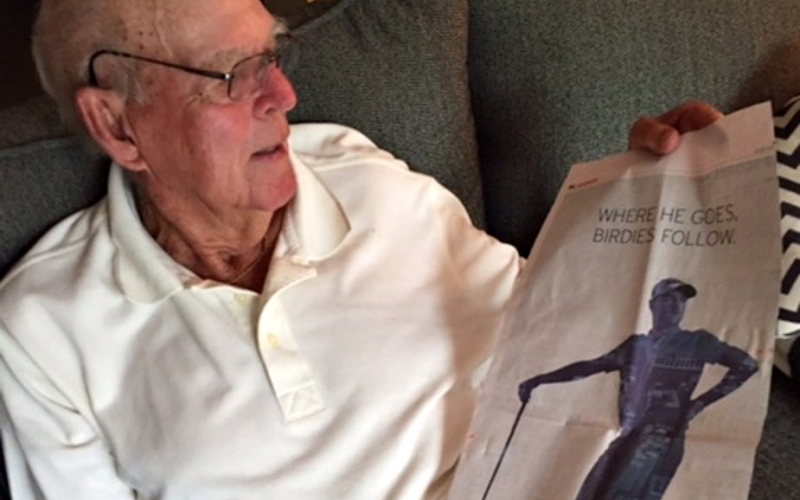 By Dave Shedloski
Justin Thomas’ victory in the 99th PGA Championship Sunday at Quail Hollow Club in Charlotte, N.C., seemed like a long time coming, even though he is 24 years old and in just his third full season on the PGA Tour. But in a sense, it was 68 years in the making.

“It’s like a dream,” said Paul Thomas, Justin’s grandfather, who with his wife Phyllis watched every shot on television from their living room couch. Not that that was different from just about any other day of the week. 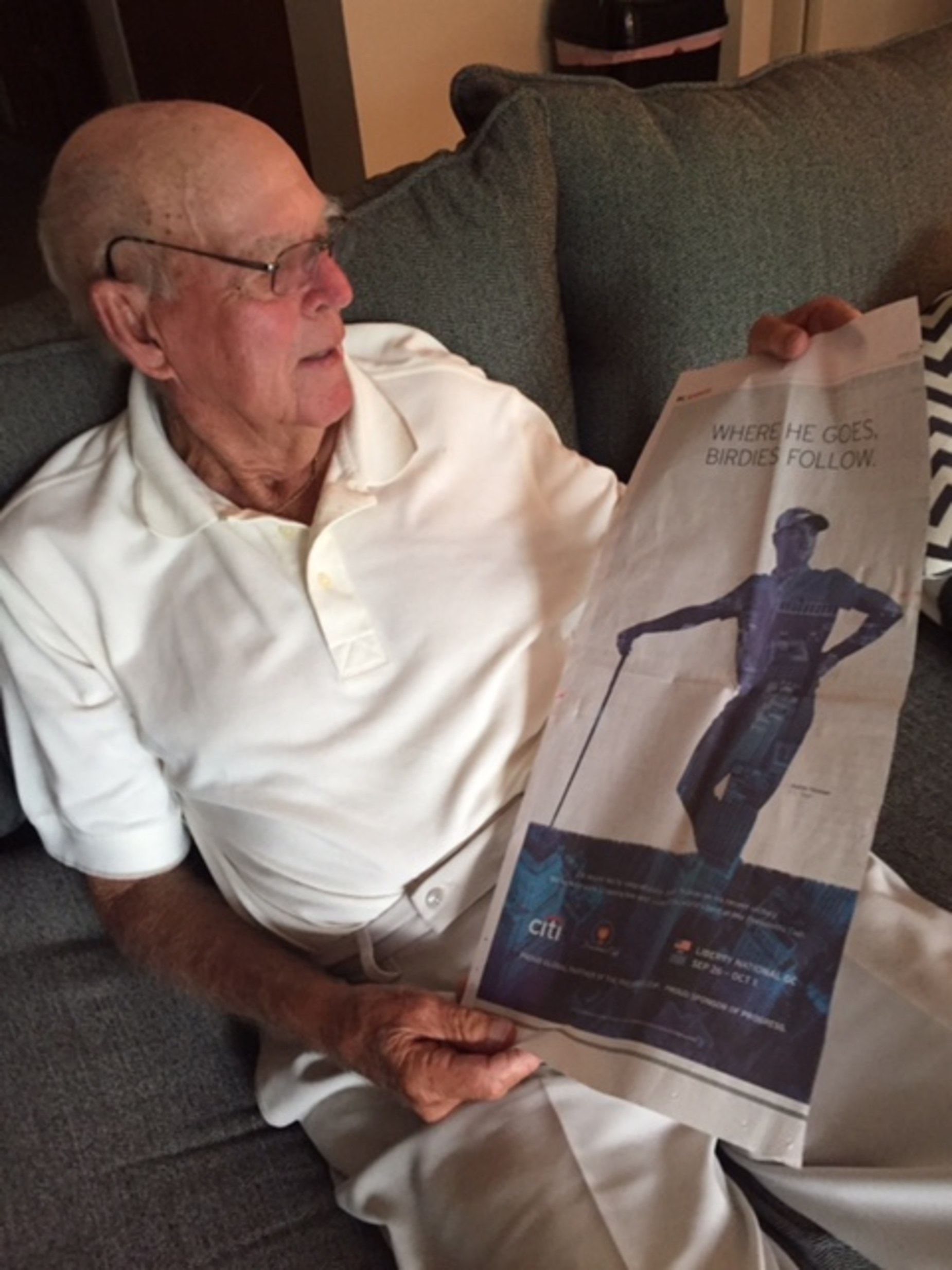 Paul Thomas holds up a full-page ad of his grandson that appeared in USA Today.

“It’s pretty much all golf all the time around here,” Phyllis said. “The cable company makes you buy 150 channels to get golf. We’d be happy if we just had Golf Channel and nothing else.”

For some insight into the making of Justin Thomas and his quick rise to the upper echelons of golf – not quite as fast as good buddy Jordan Spieth, but fast nevertheless – one need only get to know the man who blazed the trail.

Paul Thomas, or PT to just about everyone he knows, left school at age 17 to become a golf professional. His interest in the game began, like many others in a long-ago era, as a caddie at Avon Fields Golf Course in Cincinnati. A native of Ashland, Ky., Thomas needed a job and simply up and decided he was a golf pro, and he peddled his services to courses in the Cincinnati area, starting at Sharon Woods, where he cleaned clubs, gave lessons, “anything that was needed.” 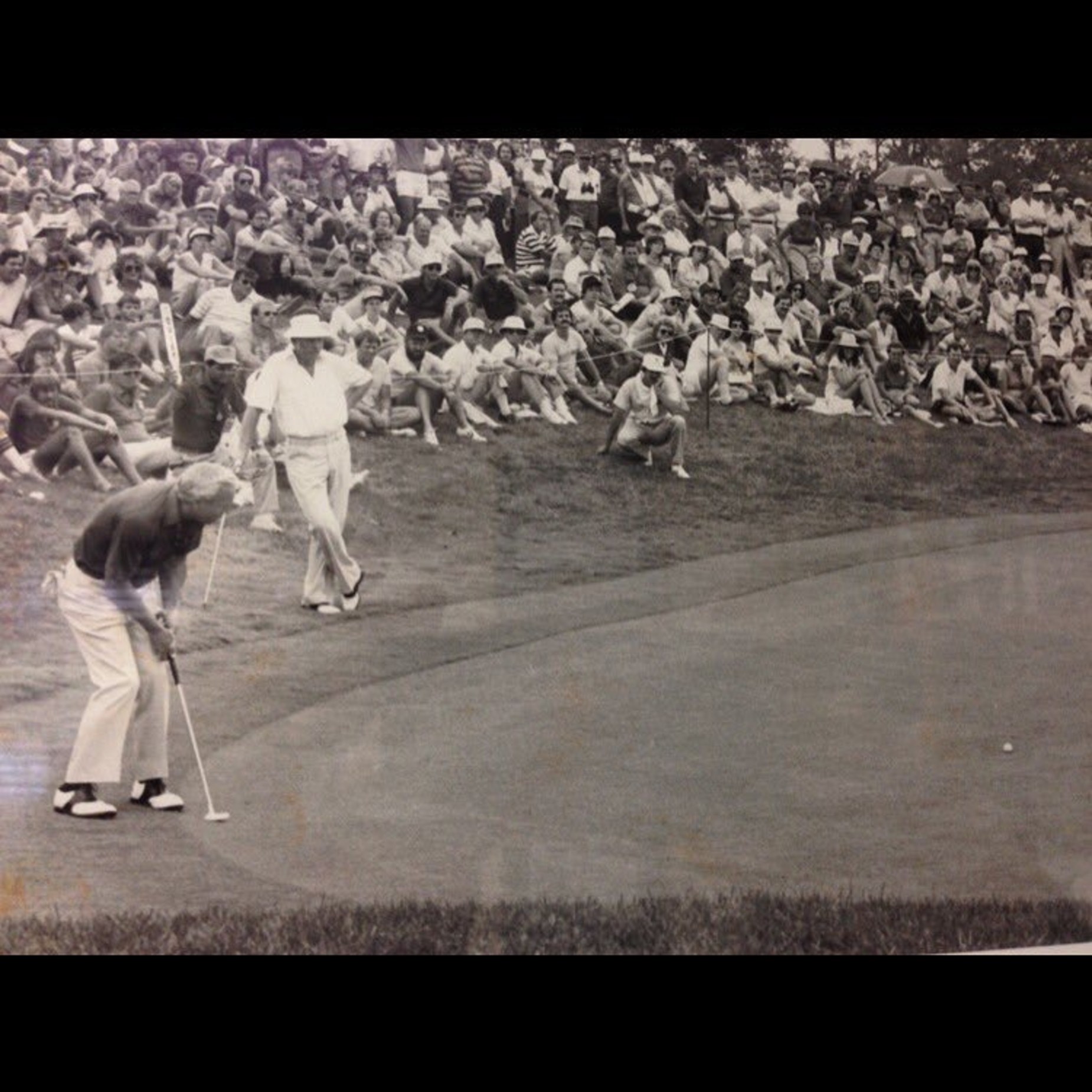 He bounced around to other jobs, from York (Pa.) Country Club to Tequesta (Fla.) Country Club. While at the former, he met Phyllis, who didn’t play golf and wasn’t that impressed at first blush. “I had no idea what a golf pro was,” she said. Paul and Phyllis Thomas have been married for 62 years.

He tried the tour in 1957 without much success and then moved back to Cincinnati to become an assistant at Western Hills Country Club. After taking time to refine his game, Thomas qualified for the 1960 and ’61 PGA Championships at, respectively, Firestone Country Club in Akron, Ohio, and Olympia Fields near Chicago. A second-round 72 that included an inward 33 on Firestone, tied with Doug Sanders for the low of the day, enabled him to make the cut. “I was a player today,” he told the press at the time. Thomas also competed in the 1962 U.S. Open at Oakmont after finishing fourth in sectional qualifying in Cincinnati.

His dream was to win one of those two majors. He never came close but competing in them yielded its own measure of satisfaction.

“That meant you were kind of a big deal, just making the field,” he said. 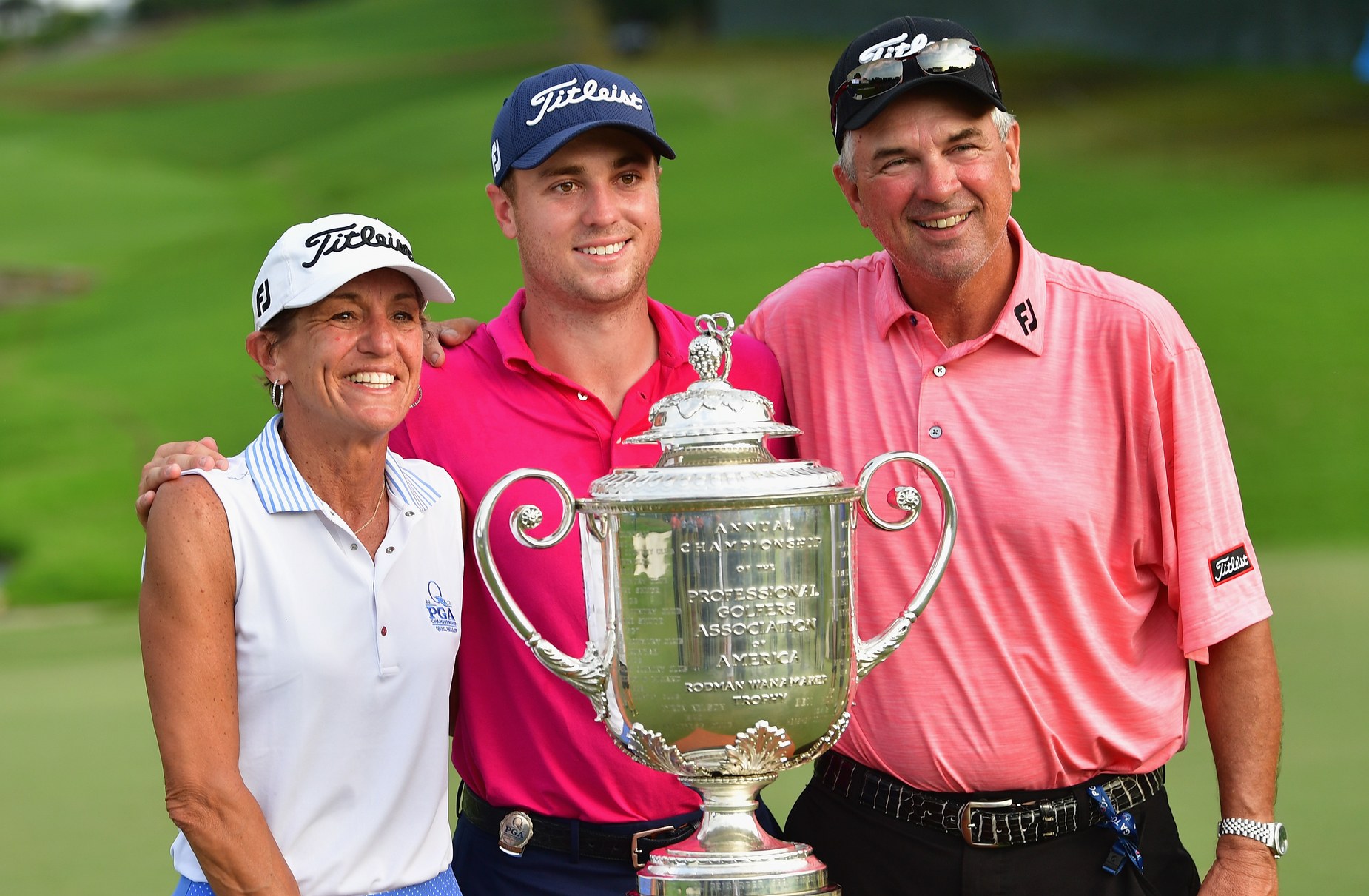 Three of his four sons, including Mike, Justin’s father, were born by the time he landed his first head professional post in 1963 at Zanesville Country Club, about 50 miles east of Columbus. He stayed for 26 years. Of the four boys, Mike displayed the most aptitude, and interest. At 10 years old he offered to caddie for his mom in the club championship after she had taken up the game. She nervously topped a few shots, moving the ball no more than 100 yards in four strokes. Mike put down the bag and walked in. Paul confronted him.

Related: 15 things you need to know about Justin Thomas

“He said, ‘If she can’t do better than that, then I quit,’” Paul remembered. “Mike got to be a really good player. He shot 65 at Zanesville as a young kid. He’d clear a place in the snow to hit balls in winter. He had certain expectations, and Justin was no different.”

But Justin took that to another level while growing up at Harmony Landing Country Club, near Louisville. “You could see the desire in him when he was 7 or 8, and he just got better every year,” Paul said. “It wasn’t long after that his dad and I just looked at each other and said, ‘He’s the real deal.’”

Paul’s favorite memory of a young Justin was watching him play the short course at PGA National in Port St. Lucie, Fla. “The holes were no more than 50-90 yards, and he would just go around and around trying to make a hole-in-one,” PT said. “He was all about making a hole-in-one. He’d hit the tee shot, and if it didn’t go in, he’d pick up and go the next hole. But I think he aced every hole at some point.”

A PGA Master Professional, Mike has been Justin’s only teacher. Paul, a renowned instructor at Zanesville and at his last job at Peek’n Peak Resort in New York before he retired, stayed out of it.

“I just talked to him about the game, about the old timers who played, how they did things,” Thomas said. “The one thing I tried to instill in him was confidence, telling him he could be a good player. I’d tell him, ‘The only guy who can screw this up is you.’ I think we know now that he’s done all right.”

Paul’s other contribution was fashion. “He learned a lot about dressing up from me,” he said with an air of satisfaction. “I was always wearing the best I could get on me, and the same with his dad. He was a little kid, and he’d never wear shorts because he said pros don’t wear shorts.”

Now that Justin has broken through, Paul said the floodgates could open for more major titles. Which would mean even more people wanting to talk to him about his grandson. At age 85, he still plays golf four times a week at Foxfire Golf Club south of the city. Phyllis, 81, also will play the occasional nine holes.

All golf all the time in the Thomas household.

“Oh, my gosh, all year long the whole conversation with the guys has been, ‘What’s Justin shooting today?’ He’s a big shot around here,” Paul said with a chuckle. “The 59 [in January at the Sony Open], making an eagle to shoot 63 in the U.S. Open, that’s some amazing stuff. We have a lot to talk about.”

“Oh, my gosh, all year long the whole conversation with the guys has been, ‘What’s Justin shooting today?’ He’s a big shot around here,” Paul said with a chuckle. “The 59 [in January at the Sony Open], making an eagle to shoot 63 in the U.S. Open, that’s some amazing stuff. We have a lot to talk about.”

PT can still score, too. He has shot his age or better every year since he turned 64. “Of course, now it gets easier, so it’s not as much fun,” he said. “Most of the time, if I can shoot something around 75, I’m usually tickled.”

Thomas said he looks forward to the day he can get together with his grandson and hold the Wanamaker Trophy, the prize he never got close to himself. He and Phyllis saw online that Justin was showing off his PGA hardware with Tiger Woods. They shook their heads in wonder. No. 6 in the world rankings and with four wins this season, Justin is a big shot everywhere.

“That PGA trophy, that’s the big one to win in our eyes,” said PT, who suspects he’ll see his grandson sometime this fall.

Would he like to have a drink out of the Wanamaker Trophy? “Nah,” he replied. “Just seeing Justin bring it in would be enough.”