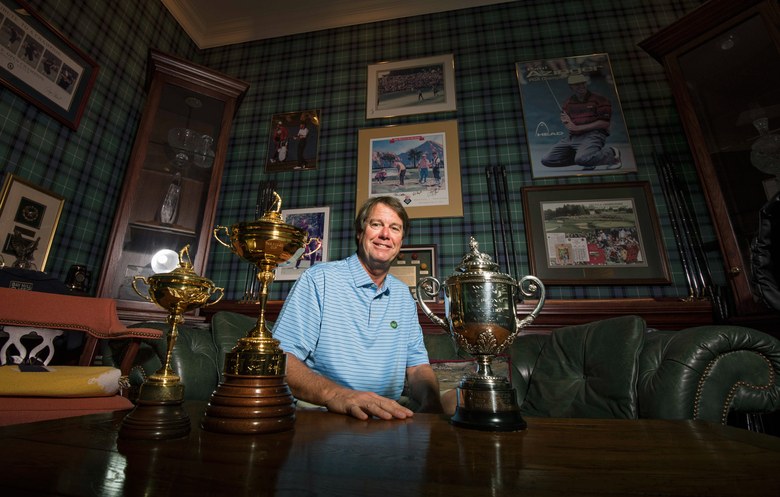 By Brian Wacker
It was a week ago Monday when Paul Azinger’s phone rang. The worst-kept secret in golf was out: Johnny Miller was retiring from NBC after nearly three decades as the network’s lead golf analyst. But the lesser known part of the plan was leaking as well: Azinger would be the man tapped to replace Miller.

Of course, Azinger had known about it all for months. Still, Miller was calling to congratulate him and in the process passed along a few words of wisdom.

“Continue to tell it like it is,” was the message Miller relayed to Azinger.

Sage words, and advice the 58-year-old shouldn’t have any trouble following. Though Miller has long been lauded by viewers and critics (sometimes to the disappointment of players themselves) for being direct in the broadcast booth, Azinger isn’t far behind when it comes to voicing his opinion.

That won’t change, he says, now that NBC has made it official, announcing on Monday that Azinger would be taking Miller’s spot as the lead golf analyst.

“I’m just going to be myself,” Azinger said. “I have nothing but praise for Johnny and his style and what he’s done, and that’s with respect to analysts in all sports. One thing he’s been great at is being himself. He left me a big spot to step into, but I’m excited about it.”

Azinger got his first taste of television two years after capturing his lone major, the 1993 PGA Championship. At the end of that year, he was diagnosed with non-Hodgkin’s lymphoma and underwent months of chemotherapy and radiation treatment. Having missed out on the 1995 Ryder Cup at Oak Hill as a player, NBC producer Tommy Roy asked Azinger if he would join Miller and Dick Enberg in the booth. Azinger was happy for the opportunity.

“I imagined myself in everybody’s chair and what would I say,” Azinger recalls of the experience. “I loved it, and it morphed into this.”

“That was a really experienced team and that helped a lot,” Azinger said. “And Tirico, he could get anyone through anything.”

That included one comedic moment together at the Open Championship. Azinger thought they were off air around 4 a.m. ET and was practicing his routine when Tirico grabbed his arm and informed him that they were indeed live. The two kept going without missing a beat.

RELATED: What made Johnny ‘Johnny’

Following a decade at ESPN, Azinger left to join Fox Sports in Year 2 of its 12-year deal with the USGA. Azinger replaced Greg Norman in the booth and was paired alongside Joe Buck beginning in 2016. Though Azinger will continue his duties with Fox, calling the U.S. Open and U.S. Women’s Open, his replacing Miller as the lead golf analyst at NBC is something he says he couldn’t even have dreamed.

“I’m just beside myself,” Azinger said. “Now I get to listen to [play-by-play announcer] Dan Hicks, who’s loaded with knowledge. I can’t believe I get to sit beside him.

Miller, and golf fans, wouldn’t have it any other way.