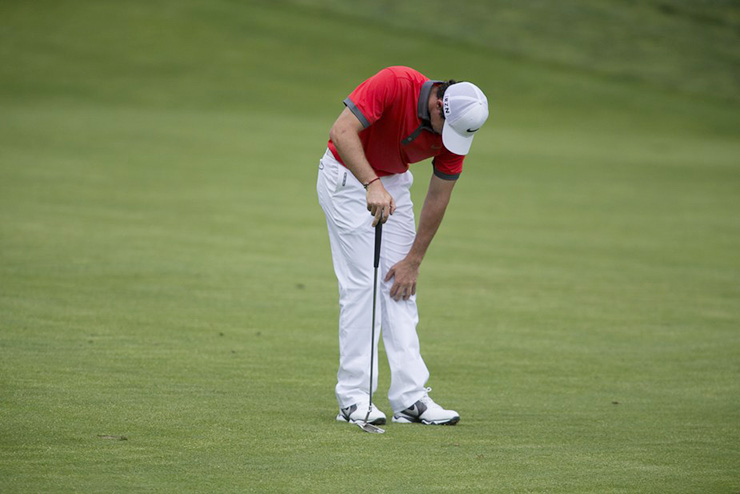 Rory McIlroy holding his knee in pain during the 2014 Memorial Tournament. (Photo by Jason Mowry/Icon SMI/Corbis via Getty Images)

The analyst’s chair on golf broadcasts was made for Paul Azinger, who is smart, a keen observer and disinclined to pull his punches, as was evident with his recent comments on Tiger Woods.

Azinger, who is occupying that chair for Fox Sports on its U.S. Open coverage, shined on Wednesday’s preview of the Open. A sampling:

— On Rory McIlroy’s injuries: “Pudgy Rory never got hurt, but fit Rory’s getting hurt a lot. I question fitness. If you think fitness makes you better it probably makes you better. But I guess there’s a point of diminishing return, if you’re not careful.”

— On the USGA’s mandate to avoid the controversies that marred the U.S. Open the past few years: “The USGA and [CEO and Executive Director] Mike Davis have a lot of pressure on them to get it right, because there are some tee boxes that if the wind switches based on what the previous forecast was, they can get caught and have players not reaching fairways.”

— On Jordan Spieth’s use of “we” rather than “I” when talking about his performance: “It’s humility on steroids. We didn’t hit in the water twice on 12. He hit it in the water twice at 12. We don’t lose sleep over it. He loses sleep over it. It’s being the humble Texan that he is. It’s part of what makes him humble. There’s not a lot of truth in the ‘we’ aspect of it, in some respects. But the caddie/player relationship is critical to a player’s success. I’d like to see us have a tournament where a player has to carry his bag. Then we’ll find out who the best player really is.”

— On McIlroy’s advantage off the tee and how the game has fundamentally changed: “He not He not only hits it a mile, he hits it straight. The fact he’s going to use driver this week is really indicative of how different this golf course is to what we traditionally see for U.S. Opens. And I like it. It’s fascinating to me. And I think it takes a lot of guts to be willing to put a ball up in the air eight or nine seconds to try to make a mockery of a hole. You’ve got to be brave to do that. It’s a real shift, a generational shift, really, from how we used to think when we thought we played the game close to the ground and tried to control our trajectory, having the ball leave at seven to 10 degrees. It’s different now. It’s a bomber’s paradise, but it’s not without risk when they do it.”