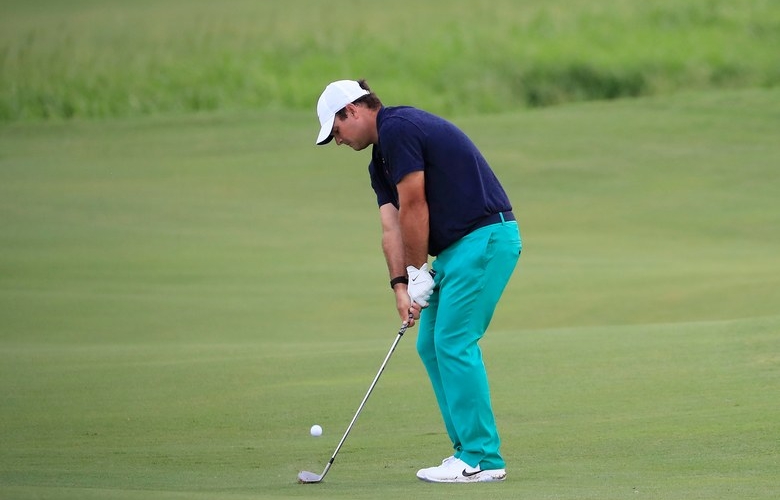 KAPALUA, HAWAII – JANUARY 03: Reed plays his third shot on the 18th hole during the second round of the Sentry Tournament Of Champions at the Kapalua Plantation Course on January 03, 2020, in Kapalua, Hawaii. (Photo by Cliff Hawkins/Getty Images)

By Dave Shedloski
KAPALUA, Hawaii — Before he became a mainstay on the PGA Tour, Patrick Reed cut his teeth on Monday qualifying, which was an integral part of his development as a professional golfer.

Whether it made him tough or enabled him to prove his toughness as a competitor, his run of Monday qualifying success in 2012, when he went six of eight, brings him a measure of satisfaction that he still draws from and remembers fondly.

“Justine [his wife and caddie in his early pro days] and I still talk about those times,” Reed said. “It was definitely a big deal. There are a lot of players out there that can shoot a low score, but when you go out on that Monday, you absolutely have to go low. It doesn’t matter if you’re tired or sick or hurt or in a bad mood, you have to bring it. I liked that.”

This bit of insight explains the push Reed was able to make on Friday on the rain-soaked Plantation Course at Kapalua Resort in the second round of the Sentry Tournament of Champions. Thanks to some nifty putting and a swing tip from his coach via a phone conversation the night before, Reed shot a seven-under 66 and posted an eight-under 138 total, one stroke behind defending champion Xander Schauffele.

Winner of this event in 2015, Reed, thanks to 26 putts, salvaged a one-under 72 on Thursday after he began the tournament three over par through seven holes. He needed only 25 putts on Friday, which, naturally, has him leading the field in strokes gained/putting by a whopping 7.117 shots. He has so far converted 278 feet of putts, the best 36-hole effort of his career.

Obviously, his ball-striking got a lot better overnight. And he hit it best when the weather was at its worst, raining sideways as gusting winds also moved in.

“I enjoy it when it gets tough out there,” he said. “I love to feel like I have to really grind.”

So he embraced the more challenging conditions. And also what his coach, Kevin Kirk, told him on the phone after looking at some video.

“[Thursday], I just felt like I wasn’t quite in the right mindset with the golf swing, wasn’t really hitting quality golf shots, and I was able to talk to my coach [Thursday] night, and today I had a clear picture what I needed to do,” said the former Masters champion. “And for some reason when the weather got worse, I seemed to get even more fine-tuned and even more into the game.”

Kirk’s advice was rather simple, really.

“The biggest thing for me is mainly my timing,” said Reed, 29, who earned an invitation to Maui after winning the Northern Trust in August. “A lot of times I get a little loose and just a little quick, and it’s kind of like, all right, settle down, just keep it nice and compact and just play the golf shot. You don’t have to run into it.

“I felt like I was trying to force it yesterday and trying to hit it too hard,” he added. “I felt like that was the biggest thing is today knowing that the weather was going to be bad, knowing it was going to rain, knew the ball wasn’t going to go anywhere, so just accept that; at least just make solid contact, hit where you’re trying to go and then play it from there.”

Reed’s toughness—or maybe it was just an attitude of defiance—came through the final day of the Presidents Cup at Royal Melbourne a few weeks ago. After struggling and losing three times in team matches with Webb Simpson, Reed birdied six of his first seven holes and easily beat C.T. Pan in singles to aid the American rally to victory over a feisty International team. He said he struggled with the same swing fault in Australia until Sunday, perhaps in part because he was also struggling to tune out a raucous partisan crowd intent on verbally punishing him at every turn for his controversial rules violation the previous week at the Hero World Challenge.

Say what you want, the guy is resilient.

Gusting winds are to remain for the final two rounds. Reed’s response to this news was a shrug while displaying his customary tight grin.

“I’ve got a clear picture now what I need to do with the golf club, how the body needs to work,” he said. “I felt like I was getting in that groove of how I’ve been playing, and I was able to kind of hit the shots I needed to hit. When that happens, it just frees you up and then the hole seems a little larger and the putts seem to go in a little easier.”

By the way, when Reed triumphed here in 2015, the tournament ended on a Monday.