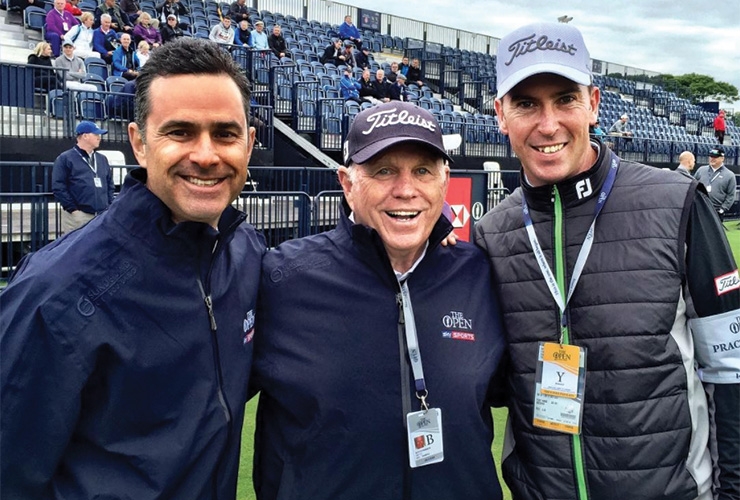 By Kent Gray
The UAE’s highest profile teaching professional has accepted a plum role at a prestigious club in the United States that boasts five PGA Tour players, including major champions David Love III and Zach Johnson, among its membership.

Justin Parsons will join Sea Island Golf Club on St. Simons Island in Georgia in February after establishing himself as one of the game’s most promising teaching talents during 14 years in Dubai.

The 42-year-old Northern Irishman will finish up as Director of Instruction at the Butch Harmon School of Golf, Dubai at The Els Club on Nov. 30 after opening the facility with Claude Harmon III in 2008-09.

RELATED: The rise and rise of Justin Parsons

The move will allow him more regular access to major champions Louis Oosthuizen and Charl Schwartzel and star-in-waiting Peter Uihlein. Parsons is currently working with the trio at the CJ Cup @ Nine Bridges, the latest PGA Tour stop in Korea. He will also continue working with leading Dubai amateur Rayhan Thomas who is headed to Oklahoma State University next year, as well as European Tour Frenchman Mike Lorenzo-Vera.

Parsons announced the appointment, a long held secret among the UAE golf industry, on Twitter Thursday:

I am thrilled to announce that I will be joining the instruction team at The Sea Island Golf Performance Center in 2019. @seaislandgpc @SeaIslandResort pic.twitter.com/DMriKJNQay

Bryan Harman and Patton Kizzire, both two-time winners on the PGA Tour, and Keith Mitchell, 67th in last season’s FedEx Cup standings, are also attached to Sea Island G.C., where Love’s father, Davis Milton Love Jr, was one of the first teaching professionals.

Love III boasts the 1997 PGA Championship and two Players Championships among his 21 PGA Tour wins while Johnson won the 2007 Masters and 2015 Open.

That Parsons is an indirect replacement at Sea Island for Billy Horschel’s coach Todd Anderson speaks volumes of the Dubai instructor’s growing reputation in the U.S.

Anderson reportedly departed the Sea Island Golf Performance Centre team in 2016 and Sea Island have waited for the right fit as a replacement. Parsons was alerted to the potential opportunity via a Titleist contact and after initially meeting Titleist Performance Institute co-founder and golf fitness guru Randy Myers, flew to Georgia with his wife Cheryl for an interview learning centre manager Craig Allan just before the U.S. Open in July.

“It’s a very, very tough decision to leave Dubai,” Parsons told Golf Digest Middle East from chilly Jeju Island in South Korea. “It’s been our home, a wonderful place to raise our family and has given me the opportunity to grow and do things that I could never have done anywhere else and I’ll be forever grateful for that.

“But having made the amounts of trips I’ve made this year as my career has kind of progressed to the PGA Tour, I was looking for something that would allow me to maintain that growth and also give me a base to work from.

“The guys at Sea Island have certainly said that’s what they want. They want somebody who is a good full swing golf coach who can try and get close to what Todd had done there as well as travelling on the PGA Tour and representing what is a very prestigious facility.”

Parsons, who got his break in Dubai at The Address Montgomerie Dubai, admitted leaving the high-profile Harmon network was a massive call. His replacement at The Els Club, Dubai training centre has yet to be formally unveiled but is understood to be a coach with a global profile.

“Obviously I opened up with Claude in 2008 [at the Els Club, Dubai], in 2009 we opened the Golf School [Butch Harmon School of Golf, Dubai], so I’ve been there since the inception,” Parsons said.

“Career wise it allows me to continue to develop my own instruction on the PGA Tour. I’m getting more use to what the players need, I’m getting more use to the pressures they have to deal with and how to assist them day to day, not only with their swing but the linkage with their physical therapists, their medical teams, their caddies. I’m becoming better at being able to do all of that.

“I’m really thankful for the opportunity Dubai has given me to grow and obviously this ongoing opportunity.”

We are excited to announce that Justin Parsons @JParsonsGolf is joining our Instruction team in 2019.
A native of Northern Ireland, Justin will bring the skills and knowledge he shares with students such as @CA_Schwartzel @Louis57TM @PeterUihlein @SeaIslandResort pic.twitter.com/rH3fEjC6tw