Parker sets the pace on sombre Thursday in Dubai 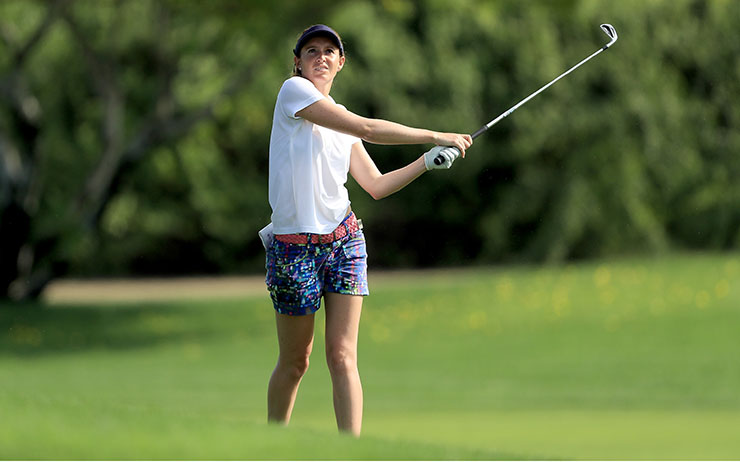 Pace-setter Florentyna Parker resumed the delayed first round of the Omega Dubai Ladies Masters on the cusp of a course record but found the going much tougher Thursday, not unlike the preceding 24 hours had been for everyone involved in the Ladies European Tour season-ender.

The 26-year-old Hamburg-born and raised Englishwoman takes a one-stroke lead into Friday’s second round. She’ll also take thoughts of what might have been into the penultimate day of the €500,000 event, shortened to 54-holes as a mark of respect for Max Zechmann, the Dubai-based Austrian bagman who tragically collapsed and died on the 13th hole while caddying for Frenchwoman Anne-Lise Caudal on Wednesday.

At a scarcely believable -7 through nine holes before play was suspended on Wednesday, Parker had Dutchwoman Dewi Claire Schreefel’s 2012 Majlis course record of 63 in her crosshairs.

Not surprisingly she was unable to keep the momentum going on a sombre Thursday, dropped shots on the 3rd and 8th compounded by a three-putt double bogey six on the her final hole, the tricky 9th.

Parker still signed for a five-under 67, one better than Cheyenne Woods (USA) and Sophie Gilquel-Bettan (France).

“It was horrible what happened,” Parker said afterwards. “Our thoughts are with the family, but it was the right decision to stop play and let us come back this morning. Yeah, we still have to do our job and concentrate on golf this week, but we’ll be thinking of [Zechmann] as well.”

Parker will also be consoled by the fact she’s missed the cut the past three years in Dubai.

“I struggled here the last few years. I was thinking back to 2010, I think I started with five or six under on the back nine, which was my front nine. And I said, I need to get that feeling back and somehow do the same, and I can do it.

“Yesterday I started so well. I had seven birdies on the front nine and gave myself nine chances, basically. Well, I went one or two better, so that it was really good, [but] then I struggled a bit this morning. It’s quite hard to find your way again…’

Six players are tied on -3 while India teen Aditi Ashok is in a group of seven players at -2 heading into the second round. Beth Allen, the Californian who has already secured the LET’s money title, is at -1, alongside Emma Cabrera-Bello whose brother Rafa led the European Tour’s UBS Hong Kong Open overnight.

Two-time major champion Suzann Pettersen (Norway) had a 74 to sit on the projected cut line at +2 while at +3, Blair O’Neal (USA) and Dame Laura Davies (England) will need fast starts Friday survive the chop, as will LPGA Tour hopeful Paige Spiranac (USA) who signed for a 77.