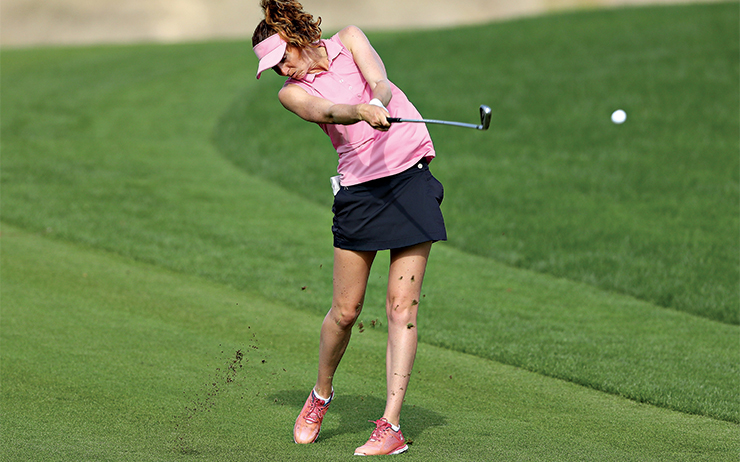 The last time Florentyna Parker’s mother Gina caddied for her she won the 2014 Italian Women’s Open. It’s a good omen to take into the final round of the 11th Omega Dubai Ladies Masters on Saturday but that’s about all the 26-year-old Englishwoman expects from her loving bag lugger down the stretch.

“She has no idea about golf,” the first round leader said after scrambling like crazy Friday for an even par 72 and a spot in the final group alongside countrywoman Felicity Johnson, whom she trails by two strokes, and Dane Emily Kristine Pedersen (-4).

“I tell her to stand. That’s what we talk about, where to stand for the next shot and not be in anyone’s way. We just talk about non-golf things.

“I know what I’m doing and I know what I have to do. We have the yardage books and we have the green books. There’s nothing else we need.”

What Parker, a two-time LET winner, wants to do Saturday is turn a solid season into a great one by winning. The world No.141 entered the final week of the season fourth on the money list courtesy of six top-10s from 16 starts but won’t be nursing her enviable position.

“The only thing I haven’t done this year is win and that’s all I’m going to do tomorrow, I’m just going to go for it. That’s what I’ve got to do. Even if I finish second or third, I’m not really interested,” she said.

Parker cancelled out three bogeys with three birdies on Friday but opened with a 67 so knows how to go low around the Majlis. She’ll need something similar today with 12 players within four shots of the lead and a further 10, including three-time defending champion Shanshan Feng, within five.

Cheyenne Woods, tied fifth overnight after three three-putts on the back nine in her second round 73, is among those poised.

“That definitely hurt me but overall, I felt like I played well today,” Woods said of her putting woes. “I gave myself a lot of chances for birdie but my putter just wasn’t as hot as it was yesterday. I’ll work on a few things and hopefully get it back [today].

“I felt like I really needed that birdie on 18 to at least get myself up there a little bit closer. I’m really happy with where I’m sitting going into [today], so I’m looking forward to a good day.”