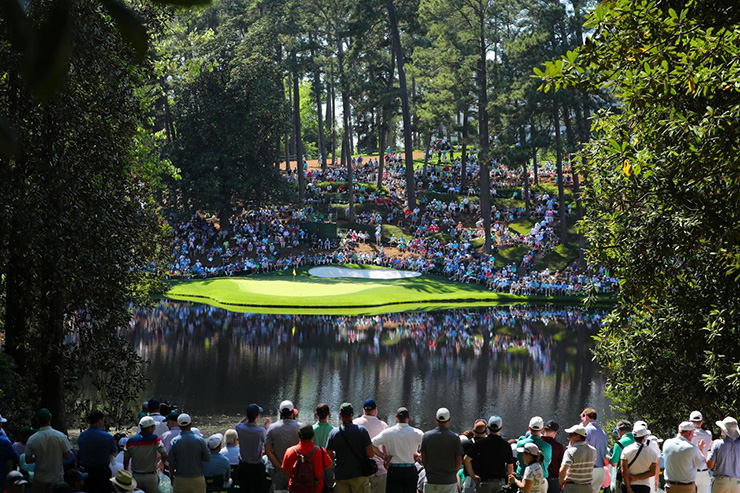 A general view from the Par 3 Contest prior to the 2019 Masters. David Cannon

By Ryan Herrington and Joel Beall
Another beloved tradition has been put on hold for 2020: the Wednesday Par 3 Contest.

Augusta National Golf Club chairman Fred Ridley announced on Tuesday that the low-key lead-in to the tournament, first held in 1960, will not take place when the Masters is contested without fans next month.

“The fun and excitement of watching Masters competitors with their friends and family is what makes the Par 3 Contest such a special part of Masters week,” Ridley stated in a press release. “We know that experience could not have been replicated without guests and patrons at Augusta National, and we eagerly anticipate the opportunity to bring back this signature tradition.”

Augusta National’s Par 3 course will be the scene, however, of an unusual one-off event during Masters week. Ridley also announced that ESPN’s College GameDay football program will air live from beside the ninth green on Nov. 14. The college football program will be broadcast live from 9 a.m.-12 noon just prior to CBS’ live broadcast of the third round of the tournament.

“When exploring ways to showcase a fall Masters, we were drawn to the concept of hosting College GameDay at Augusta National to introduce the tournament to a new audience and provide even more anticipation and excitement to the event,” Ridley said.

Ridley had previously announced the cancellation of this year’s Augusta National Women’s Amateur and the Drive, Chip and Putt National Finals, two other Masters-week events waylaid due to COVID-19.

Still, not all early week traditions are going missing. The club is planning to hold the Champions Dinner on Tuesday evening and announced it will still start the 84th playing of the tournament on Thursday Nov. 12 with the ceremonial opening tee shots from honorary starters Jack Nicklaus and Gary Player.

Augusta National’s Par 3 course, designed by George Cobb and club co-founder Cliff Roberts, opened in the fall of 1958 to rave reviews. The nine-hole course was such a hit that it was incorporated into the Masters, with the inaugural Par 3 Contest won by Sam Snead.

“Due to the indicated popularity of this new type of preliminary event with the patrons and players, it is likely that it will be staged again next year on the day preceding the first round of the Masters Tournament,” Roberts told the Augusta Chronicle.

In the years since, Roberts’ words have proven true, as the Par-3 Contest has become one of the more popular traditions during tournament week. Aside from those playing in the Masters, the Par 3 is filled with retired legends making a victory lap of sorts, producing a nostalgic ambience to the proceedings.

Over the years the Par 3 Contest has transformed into something resembling a “family day” for the players, many allowing friends or family to serve as their caddies (or in some instances, their proxy on the ninth tee box).

The Par 3 is also noted for its “curse,” as no player has won the Par 3 and the Masters in the same year. Most Masters entrants will purposefully DQ at the Par-3 Contest, hoping to avoid the event’s jinx. Last year’s winner, Matt Wallace, missed the cut with a 75 and 77.