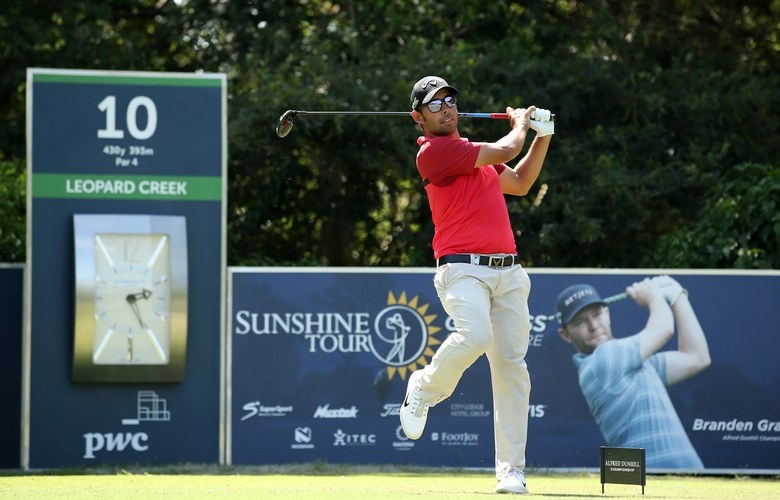 Pablo Larrazabal of Spain, fighting a blister on his right foot, is shown here on the 10th hole in the final round of the Alfred Dunhill Championship that he won by one. (Photo by Jan Kruger/Getty Images)

By John Strege
The Alfred Dunhill Championship was Pablo Larrazabal’s to lose on Sunday, and, hobbled by a painful blister, was in the process of doing so when he took a cue from Tiger Woods and limped to his first victory in more than four years.

The 36-year-old Spaniard had a three-stroke lead through 54 holes at Leopard Creek Country Club in Malelane, South Africa, when “a big blister on my right toe,” he said, threatened to derail him in the final round.

He went out in six-over 41, then clawed his way back into contention and birdied three of the final four holes for his fifth European Tour victory.

Larrazabal rejoined the mix by holing a 20-foot birdie putt at 16 to tie Wil Besseling and Joel Sjoholm for the lead. Sjoholm, playing ahead of Larrazabal, parred the par-5 18th hole to finish at seven-under-par 281.

Besseling, attempting to reach the 18th green in two from the rough, landed his ball on the green, but it rolled over and settled on the rock wall behind the green, just short of the water. From an exceedingly difficult lie, using a putter, he got the ball back on grass, then was unable to get up and down for par.

Larrazabal, meanwhile, laid up with his second, then hit a brilliant third to three feet of the hole. He holed the birdie putt to conclude an improbable back nine of three-under 34 for a three-over 75 to win the European Tour’s 2020 season opener by a stroke.

“Unbelievable, the way I won it,” he said. “It’s been a long road. I’ve really struggled the last few years. I’ve been working so hard.”