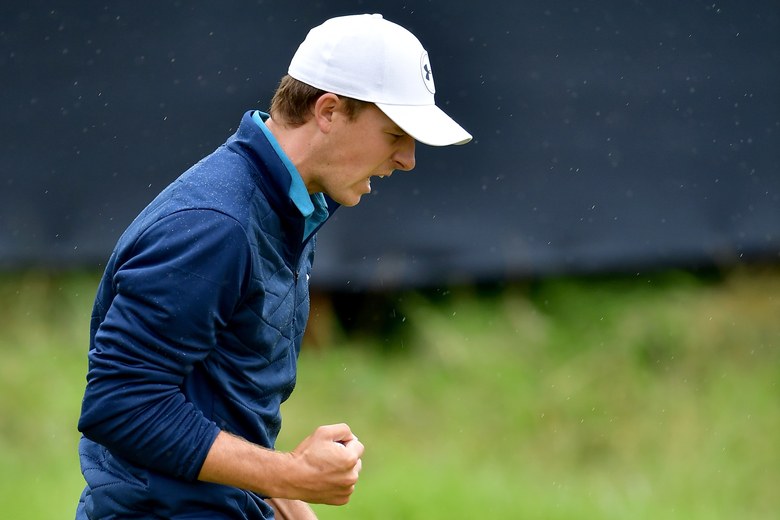 by Kent Gray at Royal Birkdale
From the sublime to the ridiculous and back again.

With a three stroke overnight lead and a week of exceptionally controlled golf behind him, the 146th Open Championship was Jordan’s Spieth’s to lose on Sunday. Boy, how he tried to hand Matt Kuchar the Claret Jug on a plate at Royal Birkdale.

Four bogeys, two of them with three putts, against a lone birdie at the fifth saw the 23-year-old Texan go out in three-over 37 and wipe out his starting buffer as major-less Matt Kuchar mixed two birdies with as many bogeys in an even par 34. Spieth had only dropped four shots in the previous 54 holes and seemed to be melting in a major once more, as he had with the lead at Augusta National in 2016 when Rae’s Creek got in the way of a Green Jacket.

When he then went seriously off-piste on the 13th and took a penalty and roughly 30 minutes to complete the par 4 from the driving range (nearly in another borough compared to where he declared his tee shot unplayable in the dunes), Kuchar led by one.

Spieth bounced back immediately with a birdie two on the 14th via a tee shot that very nearly found the bottom of the cup to draw level at -8, then drained a putt for the ages from another post code for eagle on the par 5 15th and suddenly led by two. Great champions find a way to win in the greatest adversity and the prodigy wasn’t done yet.

Next came another improbably long birdie bomb on 16 before he got up and down from in front of 17 for a more conventional gain. Five under in six holes and the “Champion Golfer of the Year” could enjoy his walk up 18.

Kuchar, having given so much to the final round, cruelly found a plugged lie in a green side trap on 18 en-route to a inconsequential bogey to finish -9 and solo second, three shots ahead of the Chinese 21-year-old Li Haotong who closed with a  63, equalling the low final round in a major, and for sometime looked like he might be required for a playoff. Rory McIlroy and Rafa Cabrera-Bello finished tied for fourth at five-under 275.

But this was Spieth’s Open Championship from start to finish, even with a little whoa in the middle of the final round. He won wire-to-wire with a -12, 268 aggregate (65-69-65-69) to eclipse by four shots the lowest winning score at Birkdale, Ian Barker-FInch’s 272 in 1991.

That was only the start of it. Spieth has now etched his name alongside some of the Open’s true greats as a winner of the Claret Jug at the Southport links, Peter Thomspon, Arnold Palmer, Lee Trevino, Johnny Miller and Tom Watson amongst them.

At 23, he’s the youngest American to win the Open and the youngest since Seve in 1979. Only Jack Nicklaus and Spieth have won three legs of the career Grand Slam before the age of 24. Spieth can now achieve that immortality as soon as next month’s US PGA at Quail Hollow in Charlotte.

The platitudes will roll and roll and they are thoroughly deserved.

“I drank a bit of wine out of it [the Claret Jug] two years ago when Zach Johnson won [at St. Andrews in 2015] and a lot of people told me it was bad luck. I started to believe them a little through nine holes today. Boy it feels good to get my hands on this.”

Spieth then paid tribute to Kuchar. “Matt, I really enjoyed battling with you buddy. Obviously it could have went to either one of us, I got the good breaks today. What a great champion Matt Kuchar is, and what a class act. I took about 20 minutes to play one of my shots today, and Matt took it in stride, smiled, and…there’s not many people who would have done that. And it speaks to the man you are, and you set a great example for all of us.”

It was a lovely tribute to his vanquished opponent who contributed so much to another exceptional Open Championship. But, save for those 13 crazy holes Sunday, the story of this week has been Spieth. What comes next no one knows but you sense Birkdale has crowned another true great.