The Open 2017: Spieth flaunts claret credentials as Birkdale bites back 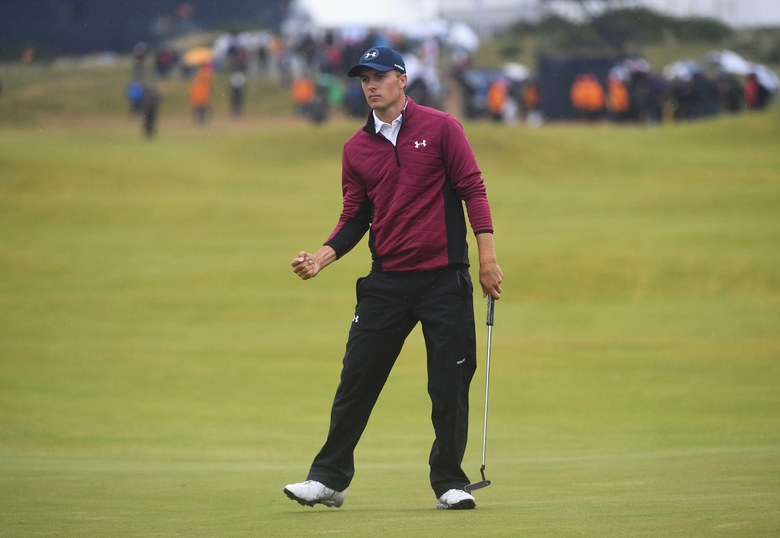 Strike Mother Nature off the list of outside agencies standing between Jordan Spieth and the Claret Jug then.

If the 23-year-old Texan was stressed about being caught on the wrong side of the draw (also known as that thing they call “summer” in England) coming into the 146th Open (“it’s almost impossible to win in that circumstance), then watching Friday’s early starters on TV grinding in 35mph winds only upped his anxiety levels.

“I would have gladly stayed on the couch,” said Spieth, knowing the rain that duly lashed Royal Birkdale was en-route. “I thought even par was [equivalent to] an eight-under round… [Offered] even par, I’d still be there right now. I would have loved that.”

Spieth needn’t have fretted. For far from going backwards as conventional wisdom hinted, he conjured a soggy and superb 69 to open up a two-stroke lead over compatriot Matt Kuchar (65-71) going to moving day. U.S. Open champion Brooks Koepka (65-72), who had co-lead with Spieth and Kuuch after the opening round, is a shot further back alongside Ian Poulter (67-70), the latter going rather well for a qualifier.

On a day for ducks, Spieth collected three birdies and an eagle on 15 as he matched Craig Stadler’s low 36-hole aggregate at Birkdale, 134 set in 1998 by the Walrus.

“So not on the good end of the draw but we seem to have grinded it out. I don’t know if we’d be on any better score if I was on the other side of the draw.”

Seems its not impossible to win on the wrong side of summer, sorry, the draw. There is still much of this Open Championship to be played but Spieth is halfway to being three quarters of the way to a career Grand Slam. Ominously, the two other times he’s opened with two scores in the 60s at majors he’s gone on to become a Masters and U.S. Open champion.

Spieth chipped in to save par after going through the back of the 10th and then caught a break when play was briefly suspended to allow the green staff to clear water from the greens. Back-to-back birdies followed at 11 and 12 and the eagle cancelled out the two bogeys that book-ended the driver, three-wood, 20-footer special at the par 5 15th.

“I got pretty frustrated through the turn, hitting it into pot bunker after pot bunker and squeaking out pars somehow. But I was able to regroup. That chip-in was massive for par. And then we had a stoppage of play and it got a little calm for about an hour or 30, 45 minutes. I got fortunate there.

“From the chip-in on 10 until we got through 12 was really, really important. I would say a total of two hours today we had less wind than the guys had this morning, which makes a significant difference.”

WATCH: A perfect chip shot from @JordanSpieth. Live on Sky Sports The Open. Brought to you by @TaylorMadeTour https://t.co/Fgb5EQYBps

Poulter, who reached Birkdale via final qualifying at his home Woburn GC, is quickly making up for the write-off that was his 2016 season, just 13 starts and a missed Ryder Cup courtesy of a foot injury. He’s had just two birdies through 36 holes.

“I’m in a bonus week. I qualified for The Open. I’m loving it, I really am. I haven’t played a major for a little while. I’m excited. I’m pumped up. I feel my game’s coming back to form.

“I mean I’m ready to go out there toe to toe with anyone this weekend.”

Tell us what you really mean why don’t you, Ian. “The large confidence tank that was empty a few months ago is starting to fill up. And I like it when it gets full up. I kind of play — I play some of my best golf when I’m pretty confident. And I’m excited for this weekend; I can’t wait.”

Neither can McIlroy who was five over par and 11-shots off the off the pace through his first six holes Thursday. He’s played the 27 holes since in six under and importantly seems to have smoothed out his putting stroke.

“I saw a lot of better iron shots. I saw some really good putts going in. So, yeah, there was a lot of quality out there and I was happy to see that,” the Ulsterman said after his 68 in the testing morning winds. “It was really tough out there. I hit some real quality shots. That was right up there with my best Open rounds.”

“Just have to try to keep that going for the next two days.”

McIlroy’s 68 was bettered only by Zach Johnson who carded a scarcely believable 66 to roar up to a share of 20th at +1. There were just eight sub par rounds, 31 fewer than Thursday, and the scoring average was northward of four over.

We’ll leave Justin Thomas to explain just how tricky the conditions were. Starting the day just two adrift of the leaders, the American doubled the first, bogeyed the second and then blew out completely on the sixth as he explained:

The quintuple-bogey contributed to an 80, dropping the 23-year-old to +7 for the tournament, two outside the cut. Other notables with an unwanted weekend off included 2008 Birkdale champion Padraig Harrington who watched a chip agonisingly burn the cup on 18 to miss by one, and the lone Welshman Stuart Manley who had been two under after the first round on his Open debut only to sign for seven bogeys and three doubles in an 81.

Phil Micklelson was one of the biggest casualties, missing the cut at The Open for just the fifth time in 24 starts, after a 77 left him on 10 over.

The five-time major winner quipped: “Unfortunately it’s the first cut I’ve missed this year and I missed it with flair.”

Catch up with all the action from a wet, windy and exciting Round 2 at Royal Birkdale. #TheOpen pic.twitter.com/PY1BfctIz2