The Open 2017: The real Rory McIlroy ‘ecstatic’ with Birkdale fightback 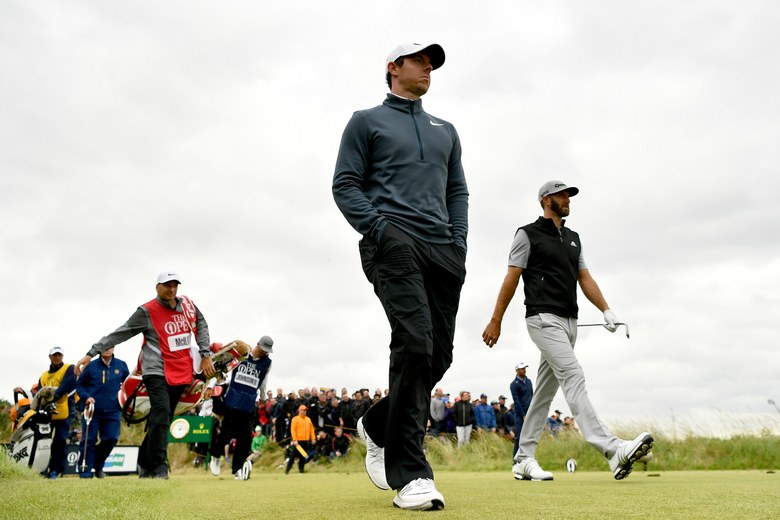 Rory McIlroy needed his caddy to remind him that he was, well, Rory McIlroy, after a nervy and nightmarish start to the 146th Open Championship. Thankfully J.P. Fitzgerald wasn’t required for anything more than the traditional bagman’s duties on Friday.

The real Rory finally showed up for the second round at Royal Birkdale, a two-under 68 getting the Ulsterman back into the championship at -1. A second Claret Jug will still take some winning but that he’s even in the conversation is nothing short of remarkable. Remember the 28-year-old was 11-shots off the pace after just six holes on Thursday.

“To be in after two days and be under-par for this championship after the way I started, I’m ecstatic with that,” said McIlroy who birdied two of his first three holes in an outward 31 and then made a series of momentum saving up and downs for par coming home.

There were bogeys on the 13th and 15th but he kept major carnage off his card and a birdie at 17 ensures he’s in the red for the weekend. The swagger is back.

“I was very proud of myself that I hung in there and tried to stay as positive as I possibly could. But, look, I just had to turn it around. I had to find a couple of little key thoughts, and I feel like I have. And I went with those today and it worked. I’ll try to keep those in my head going forward the next couple of days.”

Any hints on how you flicked the switch? “I mean, it’s not really much. It’s more about creating a picture in my head and being very clear with how my visualisation is.

“A couple of little keys that I tell myself before I step in to hit a shot or step in to hit a putt. Very simple, but obviously quite effective over the past 27 holes. I felt like that wasn’t very good the first few holes yesterday.”

If McIlroy does go on to an unthinkable fifth major this weekend, Fitzgerald’s “You’re Rory McIlroy, what the …. are you doing?” pep talk on the sixth Thursday will go down in Open folklore. Either way, McIlroy admits his bagman is more than just a man required to crunch numbers and clean clubs.

“He does do it quite often, it’s just whether it penetrates my head is a different thing,” McIlroy said of JPs on course psychology lessons. “He’s great. He tries to keep me as positive as he possibly can. Sometimes I get down on myself. We’ve been together for nine years now. He knows me pretty well. And he knows what to say out there and what not to say. And he definitely said the right thing yesterday when I needed it.”

As important as the par saving putts on 10 and 11 were Friday, so too was his pin-seeking approach to the notorious 6th.

“I saw a lot of better iron shots. I saw some really good putts going in. So, yeah, there was a lot of quality out there and I was happy to see that. Just have to try to keep that going for the next two days.”