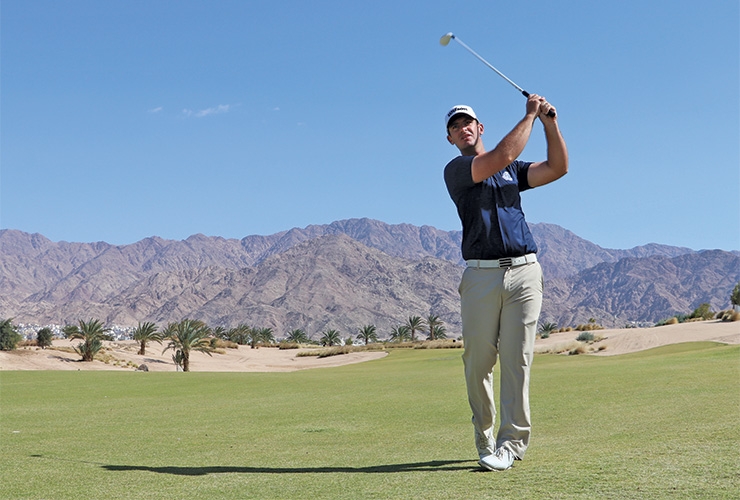 By Kent Gray
The MENA Tour deliberately took 16 months between the end of its seventh season in late 2017 and the start of its eight edition in February 2019 to redesign the regional developmental circuit. A further refinement was the decision to condense the current 2020 schedule into essentially three months between late January and mid-April, allowing members the chance to kick-start their year in the Middle East’s best weather before spreading their wings around the world. The MENA Tour suddenly fitted perfectly into golf’s global landscape – until the world suddenly wasn’t the same courtesy of the COVID-19 pandemic.

With travel around the G.C.C becoming increasingly challenging, the MENA Tour’s leadership took the decision on March 5 to postpone the final six events of the 11-tournament season until October-November, reintroducing a mid-summer break as was previously the case. Only time will tell what professional golf, much less global sport, will look like come late 2020 and beyond but two things are certain; the MENA Tour deserves praise for acting so decisively and continues to work tirelessly behind the scenes to ensure a smooth resumption when things get back to the new normal, whenever that is. In the meantime, here’s five mid-season takeaways from the 9th edition of the MENA Tour by Arena.

1) Langley leads
What’s $704 between professional golfers? For David Langley (pictured above), it’s a potentially priceless sum. The 25-year-old Englishmen went into the enforced break atop the Order of Merit (OOM) standings, edging compatriot David Hague to a start in the European Tour’s €2.5 million Trophee Hassan II as a result. At the time of press, the June 4-7 stop in Morocco wasn’t among those postponed by the European Tour meaning Langley, the 2017 Open Championship silver medallist (for low amateur honours), has a shot at quickly adding to the $25,499 he’s banked in his five MENA Tour starts this far. The Stokenchurch pro will take plenty of confidence (if not recent form) to wherever his golf travel takes him next after capturing the season-opening Journey to Jordan 1 Championship before finishing 11th and runner-up in Egypt and Oman respectively. Langley then did just enough to hold off Hague for the Morocco spot after Hague won the Royal Golf Club Bahrain Open before finishing 33rd to Langley’s 38th in the Journey to Jordan 2 Championship, the final event before the postponement. $704? A huge sum in the mini-tour scheme of things. Bailey Gill teed it up on the European Tour courtesy of the MENA Tour. Photo by Joy Chakravarty

2) Gill (just) sneaks in
The MENA Tour’s remit is to provide fledging professionals opportunities at the next level. Unlike David Langley whose aforementioned, European Tour start in Rabat is up in the air, countryman Bailey Gill at least got to play the Oman Open before the coronavirus shut down golf worldwide, the reward for winning the MENA Tour’s Ghala Open in Oman a week earlier. Rounds of 77-70 meant the 22-year-old English lefty missed the cut at Al Mouj Golf but the big-time experience was no doubt priceless. Gill will resume the MENA Tour in 6th place on the OOM. 3) Al Kurdi has company
After Josh Hill’s breakout 2019 campaign including worldwide fame after winning the Al Ain Open, Shergo Al Kurdi has dominated amateur headlines this season. The Jordanian 16-year-old become the first amateur from the G.C.C. to earn Official World Golf Ranking points after his gusty runner-up finish to Langley at the J2J#1 Championship in late January, a huge step towards realising his 2024 Olympic Games dream. But watch for Arjun Gupta (pictured No.3) in the second half of the season. The Dubai-based Indian is second to Al Kurdi in the amateur OOM and will be buoyed by his 4th placing at the Ghala Open. Gupta’s fellow Els Club Dubai range-rat, Toby Bishop, is another cursing the coronavirus enforced pause after a rich run of domestic form. Bishop, 7th in the MENA Tour amateur OOM, signed for a course record 62 en-route to winning the EGF’s Saadiyat Beach Open before capturing The Els Alliance and then leading the Trump Dubai Open before COVID-19 trumped everything. George Groves, the WR4GD No.1, in action at the DP World Tour Championship, where he lifted the EDGA Dubai finale trophy last November. Photo by Joy Chakravarty

4) Great determination
Sadly lost in these tumultuous times was the MENA Tour’s trailblazing agreement with the European Disabled Golf Association (EDGA). It was set to showcase four players with an official World Ranking for Golfers with Disability (WR4GD) and a handicap of 4.4 or less at the Ras Al Khaimah Open (Tower Links G.C.), the Northern Emirates Open (Al Hamra G.C.) and the Al Ain Classic. Those events were among the six postponed. Here’s hoping the EDGA players are among those on the tee when the MENA Tour resumes. 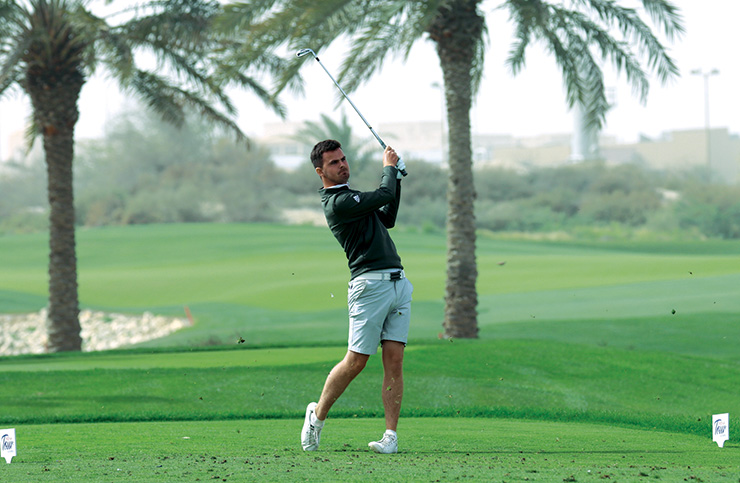 Englishman David Hague is second behind Langley in the OOM and eyeing the Arena Championship at Ayla Golf Club, the MENA Tour’s destination partner in Aqaba, Jordan. Photo by Joy Chakravarty

5) Smooth resumption
A doff of our cap to the administrators worldwide trying to piece professional golf back together again in these extremely uncertain times. The cryptic scheduling puzzle is no less challenging for the MENA Tour who had sourced a series of European, Asian, Challenge and Alps Tour starts for its best 2020 performers, invites on tours now in a state of flux themselves. Those are complications for another day though. For now, the great news is a determination to get the MENA Tour by Arena back on its feet as quickly and as safely as possible and heading towards the season-ending $100,000 Arena Championship at Ayla Golf Club, the circuit’s Aqaba destination partner. “We are in touch with the members and updating them on a regular basis. The logistics are being tied up right now. We are looking at the window of October-November. The Tour is talking to the venue partners and will release the dates as soon as possible,” the tour said in a statement. A resumption, in any shape or form, will be a grand statement of intent.