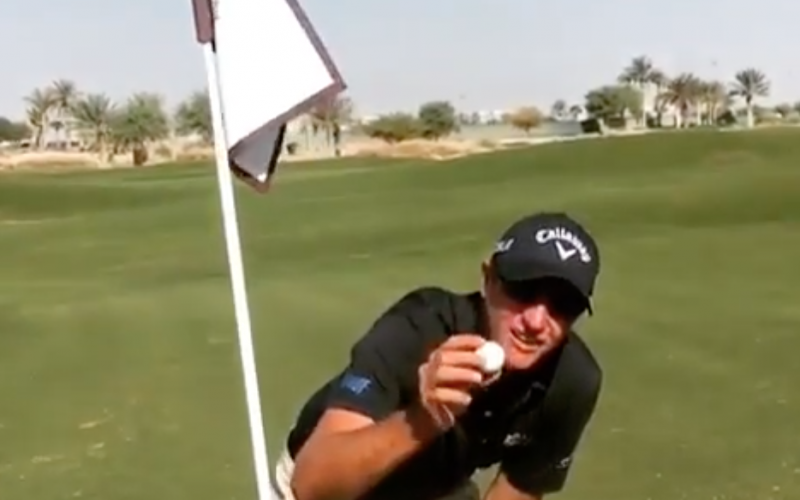 By Kent Gray
Trump International Golf Club Dubai is still a month shy of its second birthday but it’s already earned a reputation as the place to play if you’re in search of golf’s holy grail – and especially so if you’re a European Tour star.

Nicolas Colsaerts added to the legend this week when he aced a par 4 at the Gil Hanse-design – incredibly his first hole-in-one despite a near two-decade and highly successful professional career. Wait, a par-4? That makes it a albatross too. Wow.

The two-time European Tour winner, who is probably best remembered for rattling off eight birdies and an eagle against Tiger Woods and Steve Stricker during a 2012 Ryder Cup match, posted his success, a driver from 330 yards on the uphill 8th hole, on Instagram:

1st ever hole in one today after playing golf for 30 years…and of course what else then on a par 4!?

Not a bad way to warm up for the resumption of the 2018-19 European Tour season at the $7 million Abu Dhabi HSBC Championship starting next Wednesday.

It’s been quite the month for Colsaerts who also shared on social media that he recently tied the knot.

I cant find a word to describe the last couple weeks… A picture says a thousand words? I love you @rachelmileysmith

We’re thrilled for the Belgian bomber on both counts and more than just a little jealous that he broke his drought on a par 4.

Talking of droughts, when former European Ryder Cup captain Paul McGinley aced Trump Dubai’s signature par-3 17th hole in November 2017 it ended a 20-year wait for a hole in one.

But don’t feel too bad for McGinley – he’d had 13 aces previously. And it’s not even the most remarkable hole in one story in the McGinley family.

McGinley’s brother Michael, then a Dubai resident and +1 handicapper, incredibly had three in six days in 2015, one at Jumeirah Golf Estates (four iron on the 4th) and two at his then home Dubai Creek Golf and Yacht Club (with nine irons on the 5th and 8th in consecutive days).

Related: McGinley aces 17th at Trump but still no match for his bro

The odds for such an achievement are said to be 75,000,000/1 which .almost makes Colsaerts achievement seem routine.

Anyone for a round at Trump?