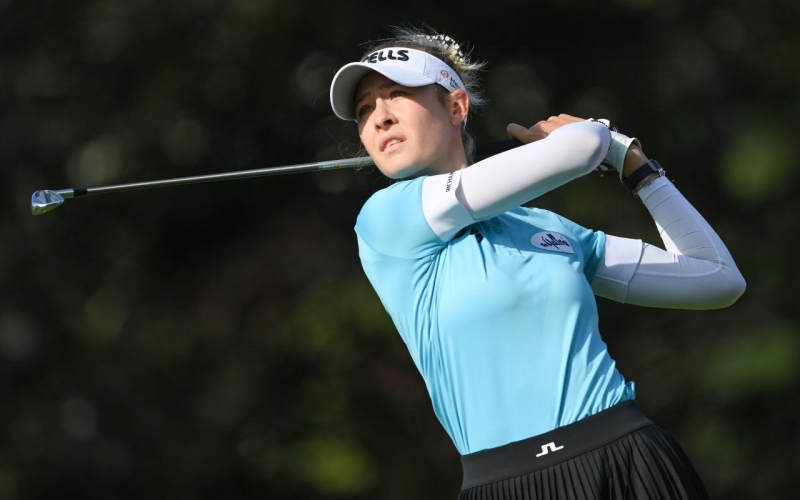 By Kent Paisley
On the final hole of the 2019 Evian Championship, Jin Young Ko turned to caddie David Brooker and asked how many putts she needed to win.

“He said, ‘If you make a par you win. If you three-putt, still you win. But you’re a professional, so you have to make a two-putt,’” Ko explained at her victory press conference.

“[It] is definitely a great honour to have won two majors in one year,” Ko said over email.

As the LPGA returns to France for this week’s Amundi Evian Championship, three golfers in the field can join this elite club: Patty Tavatanakit, winner of the ANA Inspiration, Yuka Saso, the U.S. Women’s Open champ, and Nelly Korda, who took the title at the KPMG Women’s PGA, and jumped to No. 1 in the Rolex Women’s Ranking in the process. Arguably, Korda would seem the most likely of the three to potentially accomplish the feat considering Korda’s major came just last month, was her third overall victory of 2021 and that she’s finished in the top 10 in eight of 11 individual stroke-play starts this season.

Winning a second major is a big ask for the trio, each of whom is still coming to terms with winning the first major of their careers. They all will face high expectations to win another at some point—they are, after all, 21, 20 and 22 years old, respectively. But to claim No. 2 in the same calendar year as the first would be a victory that carries a different order of magnitude.

Indeed, seven of the nine aforementioned players (all save for Ko and Tseng) are either in the LPGA or World Golf Hall of Fame, an acknowledgement of the greatness required to emerge as a major champion multiple times in a year.

“It’s very difficult [to win two majors in one season],” Sorenstam said. “A lot of people never win one in their whole career. … The field is always tough, the setup is difficult, it’s challenging. Everything needs to click, and it can be challenging. The pressure, the expectations of history makes it a little harder. It’s a very difficult feat, I think.”

While acknowledging the challenge of earning two major titles in a single season, Sorenstam, a 10-time major winner, played with a slight chip on her shoulders when she teed it up at majors after winning one earlier in a year. “In my case, I can say you wanted to prove it wasn’t a fluke,” Sorenstam said. “You can do it again.”

Park won six of her seven career majors over three years, starting in 2013. After winning a first in a calendar year, she felt like the pressure was off for the rest of that season since she’d already accomplished her goal of winning a major for the year. As the only one of the nine to win three in a season (2013), her results back that belief. However, as the years have gone by, Park has changed her perspective.

“When I was doing it, I didn’t think it was that hard,” Park said. “After I look back, I can definitely tell that it was really tough thing to do. After I won my seventh [2015 Women’s British Open], it’s taking a while to win the eighth one. Hopefully it’s coming soon, but obviously I won three majors in a year and know that it is an extremely hard thing to do. You just realise it a lot more when it’s over, when some time has passed.”

Whether it feels easy or difficult is something Korda will come to appreciate more as this week rolls on. However, she insists her new status as a major winner won’t alter her approach to competing in future majors.

“I don’t think it changes my game,” Korda said ahead of this week’s championship. “It’s definitely cool. It’s a cool feeling. I’m very proud of it. … But it’s a new week, and every week I go into a tournament with a new mindset. It doesn’t matter the ranking.”