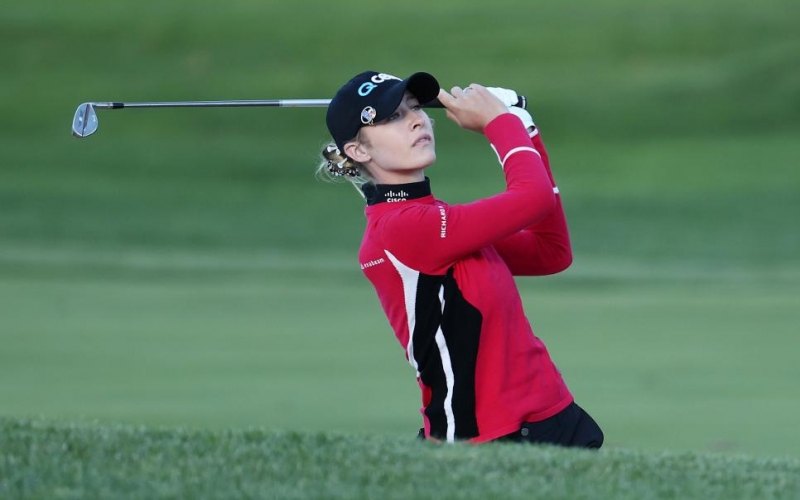 Andy Lyons/PGA of America
Nelly Korda plays a shot on the 12th hole during the first round of the 2020 KPMG Women’s PGA Championship. She withdrew from the event ahead of the second round, citing back issues.

By Keely Levins
Early Friday morning, Nelly Korda announced she had withdrawn from the KPMG Women’s PGA Championship. She cited soreness in her back as the cause for her exit ahead of her 8:21 a.m. second-round tee time with Lydia Ko and Charley Hull and said that she is headed to a specialist to help diagnose any specific issue.

The 22-year-old American is the No. 2 player in the world, and shot a one-over 71 during the first round at Aronimink Golf Club to finish the day T-26, four back of first-round leaders Kelly Tan and Brittany Lincicome.

Korda had entered the week outside Philadelphia as the betting favourite to win the event. Last week at the ShopRite LPGA Classic, she finished fifth, and in her two prior starts she lost in a playoff at the ANA Inspiration and finished tied for third at the Walmart NW Arkansas Championship.

Unfortunately I am forced to withdraw from the KPMG Championship after my first round due to a discomfort in my back. Was hoping it would be better this morning but unfortunately it is not and I will now go see a specialist. I hope to return to competition soon and wish all the competitors good luck this week. @kpmgwomenspga

She has three LPGA Tour victories, but is still in search of her first major title. Korda’s sister, Jessica, remains in the field, having shot a first-round 73.