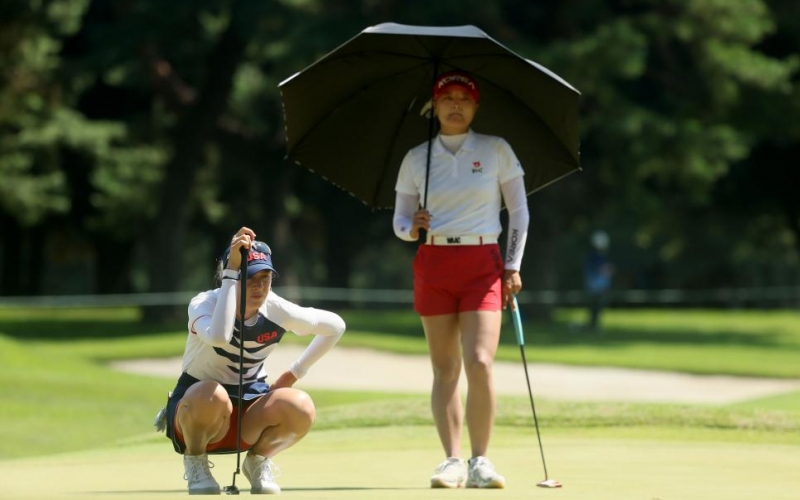 Mike Ehrmann
Nelly Korda and Jin Young Ko were paired together in the opening round of the Olympics in 2021. The pair are fighting it out to see who will win LPGA Player of the Year honors.

By Keely Levins
With this week’s Pelican Women’s Championship followed by the CME Group Tour Championship, there are two tournaments left in the 2021 LPGA Tour season. There is, however, really just one competition that has most people’s attention: Jin Young Ko vs. Nelly Korda. They’ve traded the World No. 1 ranking in the past month—Korda has it at the moment—and on a tour where the talent pool is deep, the pair have separated themselves on the Rolex Player of the Year points list.

Ko, by virtue of her four wins to Korda’s three, has 176-161 edge in the points standings (Patty Tavatanakit is third with 121). Who’ll shake out as the ultimate winner will depend on their finishes in the last two starts—players get points for top-10 finishes, 30 points for a win. That strictly objective measure of looking at the POY, which got us wondering: If you take more data into account and consider a few subjective measures, would the race between the duo look different or still be too close to call?

This is the first year that advanced data has been collected on the LPGA Tour, the KPMG Performance Insights. Golf Digest was given a look into some of that data, in hopes of trying to find something that might separate Ko and Korda. Yet even there, you’ll find the two each have their own strengths but none that allows one to stand out significantly.

Korda, 23, separated herself from her peers, including Ko, in the “birdies or better per round” stat, making 4.78 on the season. That’s .44 more than second place, according to the tour. Korda also leads in strokes gained/off the tee, and total driving—that stat combines both distance and accuracy. Lastly, she leads another category: ball-striking, which is a combination of off the tee and approach shots.

A look at Ko’s stats, however, demonstrate superiority in her long game. The 26-year-old ranked second in greens in regulation, hitting 77.9 percent of greens. She’s just behind Korda in the ball-striking stat. This season, Ko tied Annika Sorenstam and So Yeon Ryu’s record for most consecutive tournament rounds in the 60s. Knowing that, it isn’t surprising that she has the highest percentage of rounds in the 60s this season at 57.6.

Here’s some more data to compare the two, and it once more shows just how strong both have been in 2021. 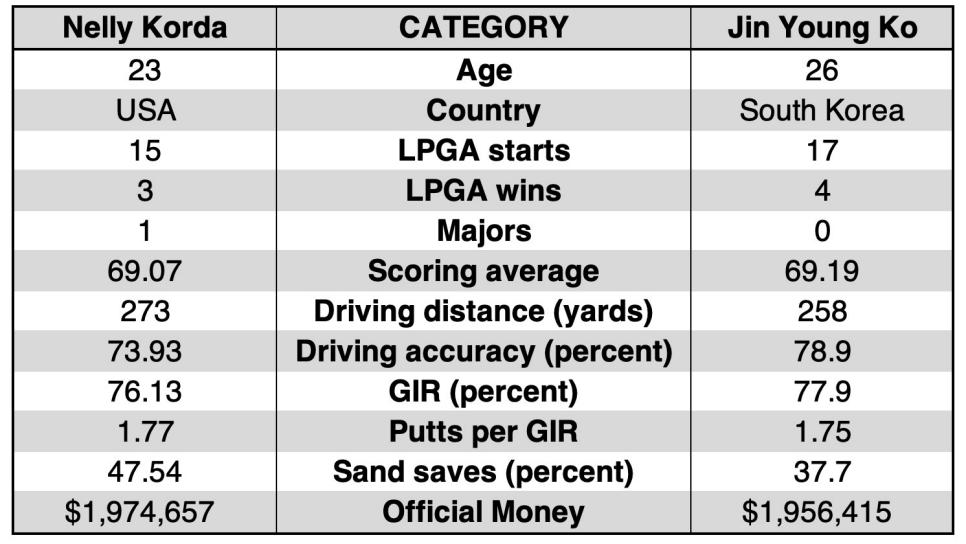 So what about some other intangibles? What’s interesting about their seasons is something the data doesn’t necessarily show: the two have had very different years in terms of when they were playing their best. Ko has gotten hot in the last half of the season, while Korda won earlier.

It wasn’t until July that Ko actually won for the first time on tour in 2021. Since then, she’s won three more times in her next six starts. Conversely, Korda won the second event of the year, and got her three wins in the first 11 events of the season. One of those wins was the KPMG Women’s PGA, her first career major. But since that win in late June, she hasn’t finished higher than T-13 on the LPGA Tour and has taken a few weeks off after a long summer schedule.

Four wins to three would seem to give the edge to Ko, but with one of Korda’s victories being a major, that might subjectively be worth more. And then there’s also one other tournament that hasn’t factored into any of the metrics but seems to be a critical intangible to consider.

Korda won the gold medal at the Olympics where Ko finished tied for ninth, seven shots behind Korda. 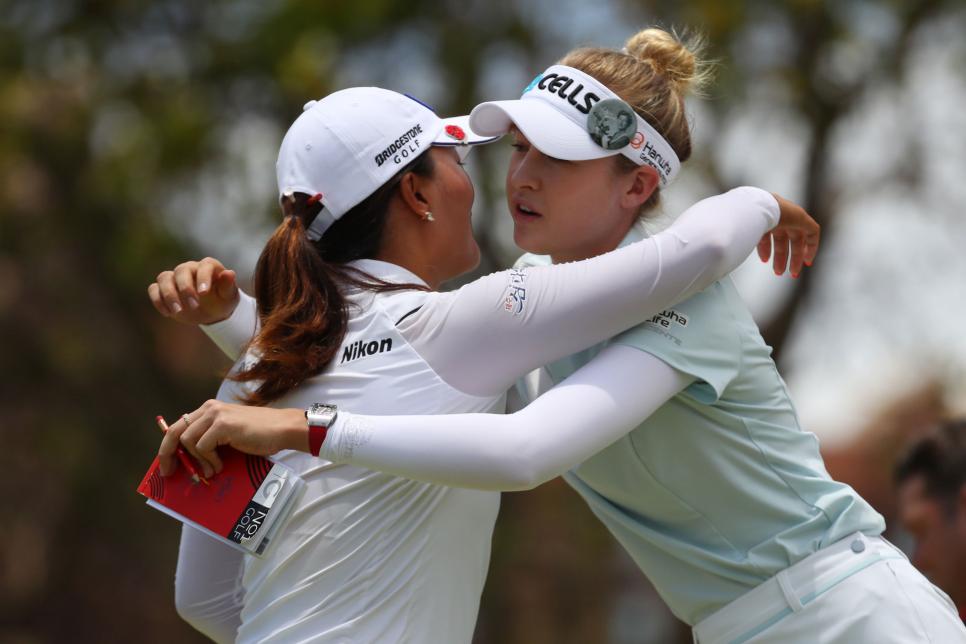 Of course, this is not an LPGA Tour event, so it doesn’t count towards official Player of the Year points, but for argument’s sake, does winning the Olympics push Korda past Ko in the Player of the Year debate? The field was different from a usual LPGA Tour event, but the pressure at the event was immense, putting players in the unusual position of playing not just for themselves but for their country.

Given that, if POY came down to a vote, and that vote was taken right now, this writer would lean toward Korda. But we don’t live in this hypothetical world. Two events are indeed left on the calendar, and both players have the opportunity to make a statement with their play. Does Ko’s hot streak continues? Or can Korda can disrupt it? Needless to say, it will be fascinating to watch.