How would modern tour pros do hitting Ben Hogan’s old clubs? We had them try, and it wasn’t pretty 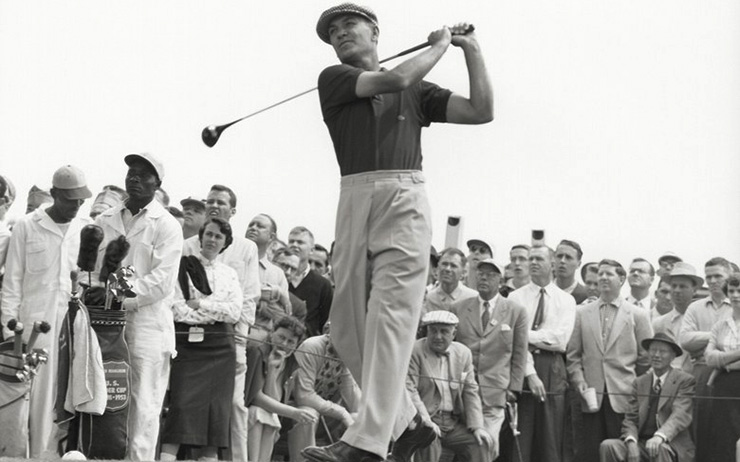 Ben Hogan died 20 years ago, but for a few hours on Tuesday he lived again on the practice tee at Colonial.

The Hawk won what’s now called the Dean & DeLuca Invitational five times, and there’s a statue of him by the clubhouse. But we thought of a more intimate way to feel him: by blowing the dust off a couple of his drivers and a Hogan model 1-iron, and putting the odd, old sticks in the hands of PGA Tour professionals. Who, for the most part, couldn’t hit them.

Those last specs might need some explaining. “Laminated” means layers of wood—often maple–glued together. Most purists in the “wood-wood” era insisted on solid blocks of persimmon. But Hogan manufactured clubs, and he loved to experiment, and he found laminates to be perfectly fine. “Tipped” means that the bottom of the shaft was driven through the club head, for still more stiffness; Ben’s clubs were about as limber as telephone poles. “Bulge and roll” is the side-to-side and up-and-down curvature along a wood’s face, an ingenious late-19th century invention that corrected a bit for mishits. Hogan did without B&R because he didn’t mishit much, and he wanted to know when he did.

“How big is this thing?” asked Stewart Cink. He uncovered his white, Taylormade R15 5-wood and compared; the metal club’s head was plainly bigger.

“Probably still some of his sweat in these grips,” said Cink, waggling the approximately 200 cubic centimeters of heavy Hogan lumber, less than twice the size of today’s drivers.

Time and hours of abrasion from the owner’s ungloved hands had worn the rough rubber “cord-line” grips to slickness. Hogan had run a piece of string underneath the grip and a little to the right so that his hands fell naturally into a “weak” position. That rib and the other custom features in the Hogan drivers virtually eliminated his bugaboo, the unexpected hook.

Knowing this, Cink, 44, who was among the last on tour to use a flammable club, tried to hit a hook. Did he ever; the ball veered like a drunk driver swerving five lanes left. His next two tries sliced right, over the yellow ropes and into the rough on Colonial’s adjacent fifth hole.

Chris Stroud, practicing next to Cink, laughed. Then he tried the half-century old club, and laughed again, as he, too, swatted a couple hard to the starboard side.

“He didn’t like to hit it left, did he?” said Stroud. “But the club head is very stable at the ball; it just doesn’t move. It’s beautiful.”

As the clubs moved up and down the tee, the hit-and-giggle pattern continued. J.T. Poston’s banana balls cracked up Billy Horschel. Tim Herron’s line drives got big laughs from three caddies. Jason Kokrak swung, and swung again, and the guy manning the Trackman chuckled, amused by the numbers coming up on the launch monitor.

Launch angles with the throwback club were much lower, around 9 degrees instead of Kokrak’s usual 11. Spin rates were dramatically higher, 3,100 rpm versus the usual 2,200; thus, the curve balls everyone was hitting. Ball speed was 164 mph against the 179 Kokrak gets with his Titleist 917D2. As for distance: Kokrak’s tournament roll-included average of 304 yards contrasted with his max carry of 271 with the old club. Of his 10 drives, most flew in the low 260s. 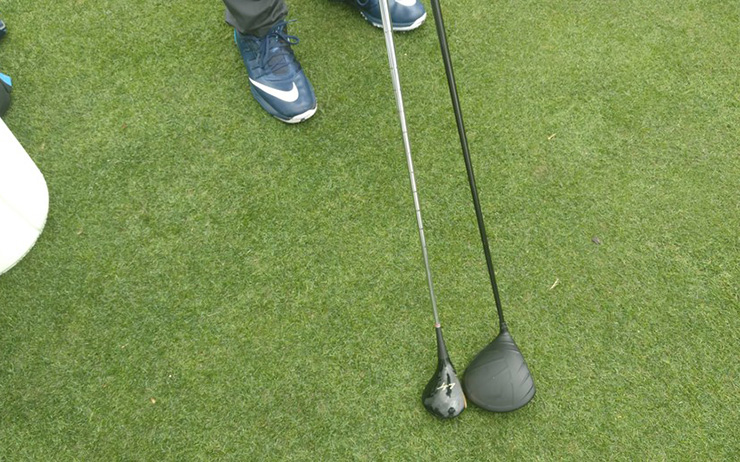 Kokrak, from Warren, Ohio, 6-foot-4 with a program weight of 225, looks like he could have played offensive line at Ohio State. The club appeared to be too small for him, and the acoustics seemed too puny, too. Even with Kokrak’s lusty attack, wood on ball sounded like a knuckle rapping on a door, while nearby the cataclysmic threek! of 460cc titanium heads reminded us that modernity was close at hand. Still, Kokrak got into it, and a small crowd gathered behind him. Caddies, reps, two writers, and a physio.

“Heavy and flat,” said Steven Bowditch of the weight and the lie angle.

“I kinda leave it off to the right,” commented Daniel Summerhays.

“My launch is a little low,” understated Herron.

“Felt awesome when I hit one in the middle of the face,” said Poston, 24. “I don’t really remember these. I think my grandpa had ‘em. … My regular driver’s gonna look enormous.”

“I played Hogan woods in college and growing up,” said Keith Clearwater, 57, the 1987 Colonial champ. “And for a few years I snuck one in my bag on tour.”

“What’s the loft on this? Two degrees?” asked Tony Finau. He swatted out a couple of drives—solid shots, probably 260 in the air—and then he snapped a photo of his big modern driver next to the little old one.

“We really should be using balata balls,” pointed out Graham DeLaet. Exactly: with a softer-covered ball with rubber-bands wound around the center, the distances would be still less and the area over the fence even more dangerous.

Ah, the 1-iron. Hogan is identified with it. He hit one of golf’s most famous pressure shots with the unfriendly-looking stick, his second to the 72nd hole in the ’51 U.S. Open at Merion. The two things people always say about the longest long iron were quickly said. Someone compared it to a butter knife. And an equipment rep repeated Lee Trevino’s old joke about holding a 1-iron above his head in a lightning storm, because “not even God can hit a 1-iron.”

But Vaughn Taylor could. “What’s the loft on this—zero degrees?” he asked. Then he struck three square shots in a row, with his slow, rhythmic swing, and said, “That little blade narrows your focus.”

Jordan Spieth put the Hogan 1-iron behind a ball—then declined to hit it. “Ouch,” he said after his first shot with the driver, a short soft slice you could have caught barehanded. But he nailed his second try, and the ball sizzled through the air.

“What if you had to use a whole set of these,” asked his caddie, Michael Greller. “Could I beat you?”

Spieth thought for a moment. “No,” he answered. “I’d adapt.”

A few spaces away, the ghost of Ben Hogan burned a cigarette and narrowed his eyes. He threw the butt down, took another swing, and then he faded away.