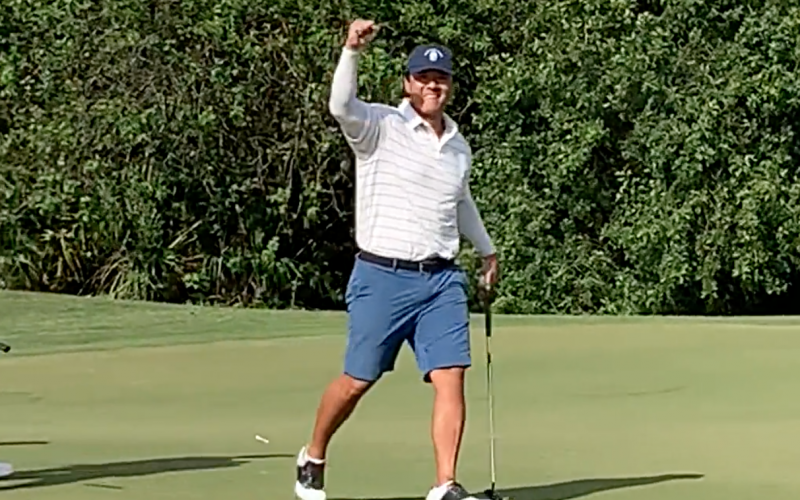 By Alex Myers
PGA Tour fans will be consumed with Tiger Woods’ chase of a record-breaking 83rd win whenever the season resumes following the Coronavirus outbreak. In the meantime, a mini-tour legend continues to pile up wins at an even faster clip.

Sunny Kim has been a dominant force on the Minor League Golf Tour since joining in October of 2006, winning an astonishing 67 times in that span. But the former Korn Ferry Tour player picked up his most incredible victory to date on Tuesday.

Beginning the second and final round nine shots behind Gavin Hall, Kim birdied eight of his first 15 holes at the Fox Club in Palm City, Fla. And then he really got cooking. The Korean-born golfer who grew up in Queens, N.Y., holed a 9-iron from 165 yards for eagle on the par-4 16th, then added another eagle at No. 18 to shoot 59 on the par-71 course.

Minor League Golf Tour Legend Sunny Kim was 9 back to start today. All he did was shoot 59, including a eagle on 440 yd par 4 16th and eagle on the par 5 last. If it holds up it will be his SIXTY-SEVENTH (67!!) Minor League win. pic.twitter.com/I2wD0TEx7J

And for fans looking for highlights, here’s Sunny sinking the final putt and getting elbow bumps from his playing partners:

Making the occasion even sweeter was that it happened to be Sunny’s 31st birthday. Hopefully he didn’t go too crazy with that winning check for $2,100.

Surprisingly, Kim is the first player to break 60 on the Minor League Golf Tour, which is in its 17th season. Not surprisingly, he had one of the tour’s previous two rounds of 60s, with the other belonging to Chase Koepka, the younger brother of four-time major champ Brooks Koepka. Chase finished T-10 in this event.

The Minor League Golf Tour is one of several mini-tours around the country that has continued to host events while major sports leagues are on break. Of note, a first-ever 59 on the Outlaw Tour was shot, and eight-time LPGA winner Anna Nordqvist won on the Cactus Tour.

According to the MLGT’s website, the next tournament starts Thursday at PGA National and will be the 37th(!) of the year. And you thought the PGA Tour had a jam-packed schedule.

The guy currently in 150th place in the FedEx Cup standings, Austin Cook, has already made $279,342 this year. The same cannot be said of the Korn Ferry Tour.