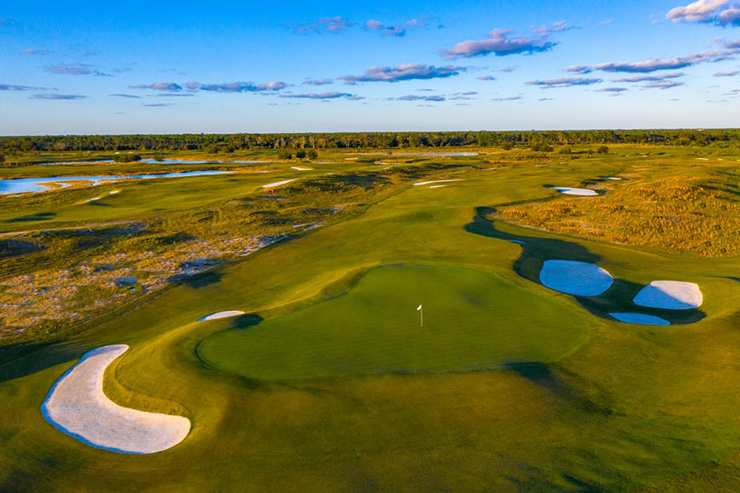 By Alex Myers
Welcome to another edition of The Grind where Tiger Woods is the only Tiger King we will ever recognize. That being said, after binging on the Netflix documentary, I can honestly say it’s the craziest thing I’ve ever seen. And I highly recommend watching just so you will understand the deluge of memes it has spawned.

Who are we kidding? Anyone reading this has already watched it. Well, except my parents. Seriously, give it a try, guys. What else do you have to do? Well, other than read The Grind, of course. We may not have Joe Exotic, but we’ve got a quirky cast of characters in their own right and some unusual plotlines as well. So let’s dive in.

Michael Jordan’s playground: New playground, that is. Man, I used to love watching that VHS (dating myself!), but now MJ has an actual, sprawling playground with his own golf course called The Grove XXIII (get it?). Our Derek Duncan did a story on the Hobe Soundtrack and it looks absolutely spectacular: 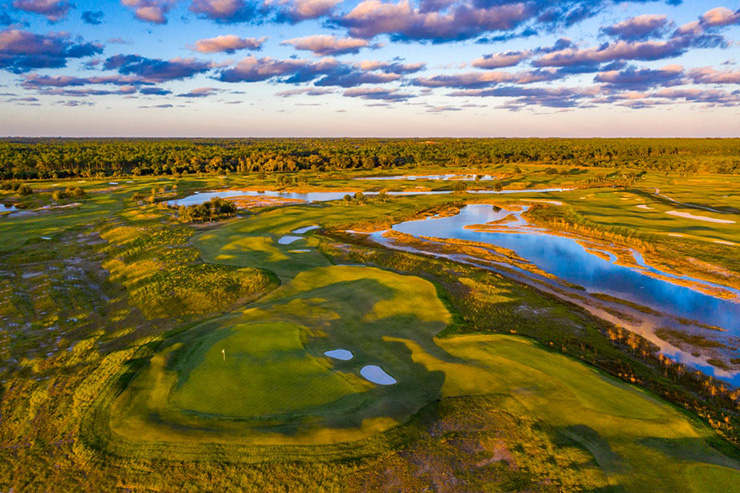 Also looking spectacular? That ESPN documentary on Jordan’s Bulls, which has now had its release date pushed up because everyone begged for it. Turns out, peer pressure can be a good thing!

Larry David: First of all, have you watched the new season of Curb Your Enthusiasm? It’s utterly brilliant. So good, in fact, I’m considering moving it into a tie with Seinfeld. . . but anyway, Larry is doing good things off-camera as well like setting up a fund for Riviera’s caddies during these tough times. The best part? He did it with his friend, Lloyd Braun. Meaning there’s actually a real Lloyd Braun!

OK, so that’s not actually the best part. The best part is the money for the caddies, but you get the point. Well done, LD.

Calvin Peete: I’m not sure why, but a few people were discussing Peete’s driving accuracy on Twitter and it caught my attention. Look at these stats!

The dude hit more than 81 per cent of his fairways for over a decade?! That’s nearly Michael Jordan’s career free-throw percentage! Amazing. Also, my grandpa (RIP) always said he was a big fan of Calvin (RIP as well) who played before I started watching golf. So yeah, he’s way up in my book, too.

More postponements/cancellations: Another week, more moving parts when it comes to golf’s interrupted schedule, many of which were reported by our Joel Beall and Brian Wacker. The British Open could be heading for September, the U.S. Open could be moving to October (and moving locations), and the Masters might be in November now. Actually, assuming life gets back to normal, that sounds like a pretty sweet plan. Fingers crossed.

Mass DQs: As long as golf continues to be played somewhere, there will continue to be rules violations. Even on the Outlaw Tour, where you might think the rule of law wouldn’t apply. Turns out, the Outlaw Tour has a Sheriff! True story! 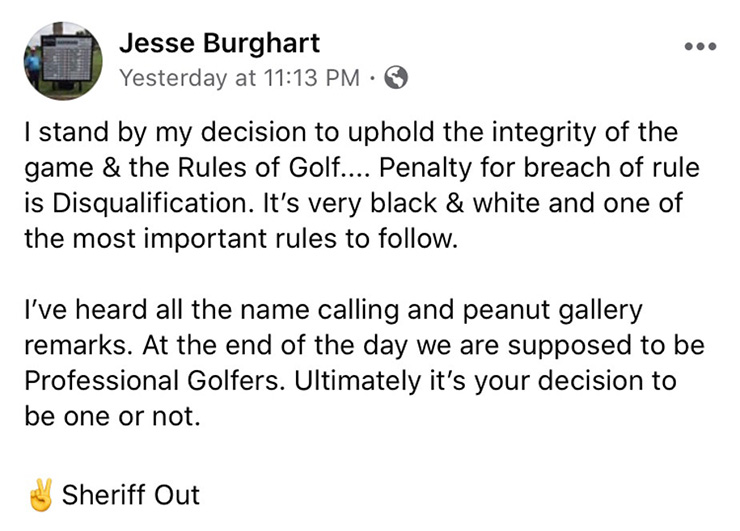 Sheriff out! Love it. But seriously, this situation sucks, especially for the 14 players who plunked down as much as $875 to enter the tournament only to be disqualified after a scorecard mix-up that caused them to play from a LONGER yardage. Ouch.

Corona-aided aces: With golf courses that are still opened raising cups to help prevent the spread of the disease, this is a valid question:

@AlanShipnuck @shanebacon @TronCarterNLU what’s the verdict on aces during raisedcupSZN. We saw it ding from the tee but that ain’t holed. Marked it 1.5 on the card pic.twitter.com/KkZWg0T9iT

But, sorry, the answer is no. Call me the Hole-in-One Sheriff.

Random tournament fact: Charley Hoffman might miss this event more than anyone considering he has a win, two seconds and a third. In fact, PGATour.com put him No. 1 on an all-time Valero Texas Open power rankings list. Yep, these are tough times for creating golf content. We applaud the effort.

— Gambling isn’t allowed/encouraged at MJ’s golf course: 1 MILLION-to-1 odds
—The Masters won’t be played in 2020: 3-to-1 odds (Actual odds… gulp…)
—I will make a Corona-aided ace and not be allowed to count it now: LOCK

Thankfully, no one was hurt.

A bored Joe Buck asked for people to send him random videos to do play-by-play to and Justin Thomas responded with one of him fixing his hair. The result was superb:

Here’s my buddy @pgatour player @JustinThomas34. Is this the most captivating video? No. Is it relatable to 75% of the men that will see it? Yes. Yes, it is. Justin, we can DM about who to go see. Also, I did the @JordanSpieth line per your request so now make a donation! pic.twitter.com/bwzAhCgPyB

I lost it on the “Jordan Spieth pulldown” line. Well done all around.

ARCHIVE VIRAL VIDEO OF THE WEEK

A little over four years ago, Nicolas Colsaerts smoked a 3-iron through a sliding door in his hotel room. It was an impressive—and dangerous—shot that went viral, but we only just found out how dangerous it actually was. Turns out, Colsaerts’ first attempt didn’t make it through!

As with the Love house fire, thankfully, no one was hurt.

THIS WEEK IN DUSTIN JOHNSON-PAULINA GRETZKY PUBLIC DISPLAYS OF PUTTING

If Dustin and Paulina are any indication, we are going to see unprecedented good putting when this is all over. pic.twitter.com/RjS2rMEatq

You know what they say: The couple that putts together, stays together. But seriously, it seems like everyone from tour pros to colleagues have been practising their putting during this crazy time. I should probably get on that. Or exercise. Or just do something other than eat Hershey’s Kisses.

A few days after I knocked the five-time major champ for being too quiet during this boring time to be a sports fan, Mickelson delivered some potentially amazing news on the content front:

A Tiger-Phil rematch? Sign me up! But could this really be a possibility?

I don’t tease. I’m kinda a sure thing

Not a tease, that is, unless you count all those U.S. Opens! Anyway, let’s hope this “sure thing” comes through. Whatever the format. Whoever the participants. Please. Give us anything.

Soren Kjeldsen figured out a way to have some family fun while poking fun at Tiger Woods, Rory McIlroy and others with these impersonations:

Thanks to Kjeldsen Productions (his kids) for filming. pic.twitter.com/mi7xymnLRJ

Good stuff. Also, if that’s all part of Soren’s backyard, it looks like he’s invested his career earnings very well. And in case anyone was wondering if Rory is still good at golf:

Just making sure my club twirl is on point before we get back playing again 🤣 @taylormadegolf #tmbouncechallenge (no one was harmed in the making of this video!)

Excuse my French but this shit is going to make us treasure so much down the road guys. 👌🏼

Sunny Kim shot a final-round 59(!) to win his 67th(!) Minor League Golf Tour event. Not sure how the MLGT stacks up to the Outlaw Tour, but that is mighty impressive. . . . The 2020 Olympics has been officially postponed to 2021. In other words, Justin Rose can tote his gold medal around for another year. . . . And finally, Mark Calcavecchia played the role of hairdresser for his wife:

You’d think a golfer would have a lighter touch.

Will they still be called the 2020 Olympics?
Are we about to enter the greatest putting era ever?
How long can I last before my wife has to cut my hair?