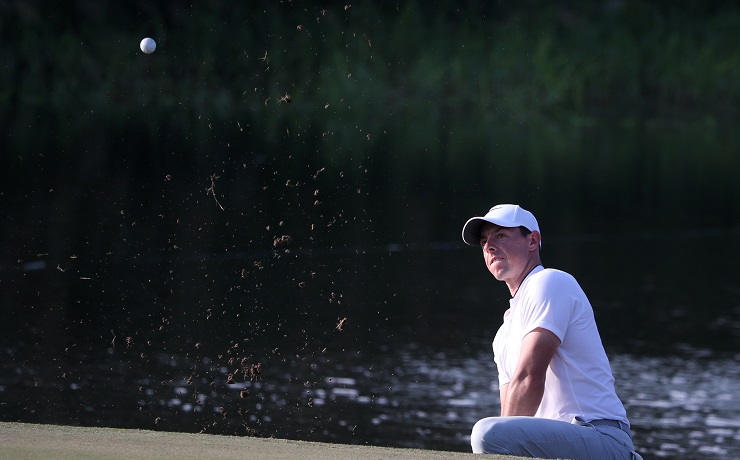 And then there were three?

After bypassing the Race to Dubai’s previous playoff events in Turkey and South Africa, Rory McIlroy was only ever a mathematical chance of clinching a third European Tour order of merit title entering the 8th DP World Tour Championship this week.

But after a sloppy three-over-par 75 in Dubai on Thursday, the world No.2 is going to need one of the greatest comebacks on Earth and plenty of help besides to overhaul Henrik Stenson, Danny Willett and Alex Noren for the Harry Vardon trophy.

Even victory at Jumeirah Golf Estates, as improbable as they looked as an out-of-sorts McIlroy mixed four bogeys and a sockless double from the hazard beyond the 16th green with three birdies Thursday, mightn’t be enough given that he started the DP World Tour Championship fourth place in the rankings, a whopping 1.176 million points behind pole-setter Stenson.

MclIroy must win this week but the equation was even more complicated after the opening round at Jumeirah Golf Estates with McIlroy nine shots adrift of first round leader Lee Westwood (66). More importantly in the Race to Dubai’s home straight, the Northern Irishman trails Noren and Willett (71) by four and Stenson (72) by three.

McIlroy’s Major championship pedigree and proven ability to do the limbo on leaderboards around the world at any juncture means a miracle cannot be discounted. It would certainly be something to beyond over the weekend but more likely is a three-way dogfight between Stenson, Willett and Noren.

McIlroy, who bogeyed his opening hole and was four over after 10, rebounded with back-to-back birdies on the 14th and 15th. But the momentum went down the gurgler when he found the hazard on the tricky par 4 16th, took two to escape the red staked area (the second with his right sock and shoe off) and then missed his bogey putt. Sergio Garcia also doubled 16, giving back the two shots he gained after draining a monster eagle putt two holes earlier en-route to a 68 and a share of third place overnight.

The hard working Noren, fresh from his Nedbank Challenge win in South Africa, was the last man on the range Thursday night as he tried to recapture some of the magic which saw him sign for a closing 63 in Sun City last Sunday.
Masters champion Willett, sporting a new beard and a mostly frustrated scowl on his face due to a number of miss-read putts, hit the shot of the day to a foot at the fifth, the tap in birdie one of four on Thursday. Sadly there were also three bogeys as the Englishman had to settle for a one shot buffer over playing partner Stenson whom he must beat to be crowned R2D champion.

“Yeah, it’s one of them, isn’t it,” Willett said when asked if his was a “no damage done” type of round.

“The first day, it’s always nice to get off to a flyer but if you keep kind of nosing on and shooting better each day up the leaderboard, and come Sunday, you’re never going to be too far off.”

And what of Open champion Stenson who cancelled out a bogey on the fourth with a birdie four on the seventh but otherwise couldn’t get much going in his even par 72.

“It wasn’t my best day. I played very average…I had a lot of in-between numbers out there, and I’d say the good putts I hit didn’t go in and the bad ones certainly didn’t,” Stenson said.

The key was neither Willett nor Noren, second and third respectively on the Race to Dubai standings entering the week, stole a march on the Swede.

“So no one made a big move today, but it’s still a long ways to go. It’s a race and not a sprint. Yeah, got plenty of time to make up some ground and I’m going to try harder tomorrow,” said Stenson, a back-to-back champion at JGE in 2013-14.

“Yeah [I’ve] just have to play better if we want to shoot a good number…I’ve shot 64s around here before, so that’s always a possibility.”

Asked what it would mean to add the a third Race to Dubai-DP World Tour Championship double to his CV, Stenson agreed it would be some Christmas present.

“I’m going skiing with the kids [over Christmas], so I don’t think I’ll bring the trophies, but it would be nice to have them both back home. I’m hanging in there. I’m trying my hardest, don’t you worry.” – Kent Gray