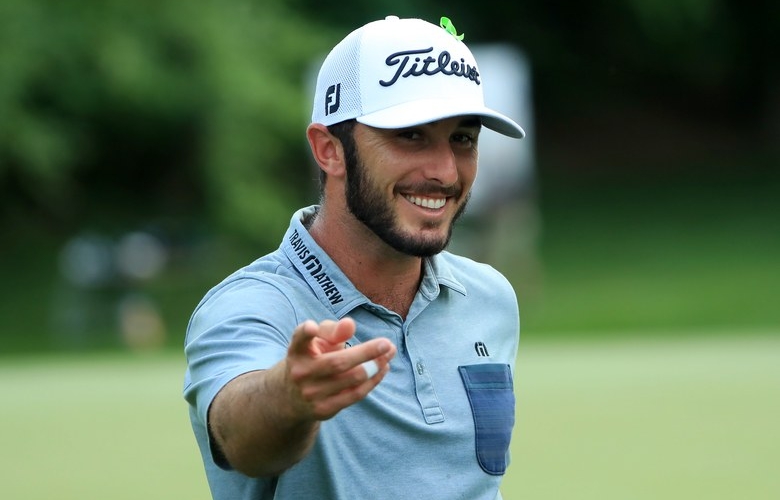 By Christopher Powers
Prior to Sunday, Max Homa was best known in the golf world for his presence on Twitter, a fact he was well aware of—and proud of. “I probably have a fairly large fan base compared to what I deserve for my golf,” Homa told Ron Kroichick of the San Francisco Chronicle in February. If you’re one of Homa’s 30,400 followers, you know “self-owns” like this are a common occurrence for the 2013 NCAA individual champion.

But on Sunday at Quail Hollow, Homa went from “that golfer on Twitter” to PGA Tour winner, something not even he could have imagined when he missed 15 of 17 cuts on tour in 2017. Homa kept plugging away, his hard work paying off in the form of a 15-under total at the Wells Fargo Championship, which earned him two years of playing privileges on tour, a spot in the PGA Championship in two weeks at Bethpage Black, an invite to next year’s Players Championship and Masters, where he’ll be making his debut, and much more.

As fans of Homa’s Twitter, we can only hope his triumph in Charlotte doesn’t make him go big time on us. Knowing him, the 28-year-old from Valencia, Calif., won’t change a lick, which is what has made him so popular on the social-media app. Below are some of his best tweets, from the most self-deprecating to the most philosophical (sort of).

I would call this a gallery but tomato potato https://t.co/r0OVYQeBFk

Had a few caddies hit me up recently hoping to team up. They heard they usually get weekends off which is apparently a great selling point

I don’t think I’d be nervous on the first tee at my first Masters. It’s always been a dream of mine to play that tournament. I’d jump right past nervous and skip straight to violently ill, unfit to be in public

Despite 6 years of Hebrew school and the completion of my Bar Mitzvah, the most Jewish I’ve ever felt came after looking at a home with extravagant Christmas lights and immediately thinking “that electric bill must be brutal”

I don’t use a green reading book because if I did, I wouldn’t be able to blame my caddy when I missed

I’m rooting for Talor Gooch because he’s one of my best friends. I’m also rooting for him because he has a last name that makes me feel less insecure about my own

When u have to walk back to the tee after u can’t find ur ball pic.twitter.com/Swd4WVeOAF

He remembers all his mom’s lessons

I just made my bed without my mom telling me I had to. Miracles do happen. Thank u guys for all your support. What a day #blessed

Adulthood: finally understanding why it was important to defrost the chicken when your mom told u to, not 2 seconds after u heard the garage door open

To the couple making out at the end of this P.F. Chang’s bar: hey, get a booth next time and sit on the same side like a couple of psychos

My friend started dating a girl in Dec. & the Xmas present panic is real. Go too small & she’s sad. Too big & she’s scared. Fun for me tho

So ur saying that the older, single gentleman that had to go on a tv show to find his soulmate because he couldn’t in the real world who everyone decided was perfect in every way was actually flawed and not a great guy?!?!?!? #bachelor

If u get friend zoned on live tv after winning a tourney, u pretty much need to do some not appropriate for all viewers type stuff after ur next W to get rid of that stigma #JustSaying

He’s very observant of his surroundings

A husband at the airport just called out his wife for being too close to the line & confusing people who were ready to board. Huge win seeing as how this is many people’s pet peeve. Was great to see someone stand up for the greater good of the group. He lost tho, obviously

Theres clearly an age a man hits where he all of a sudden decides that running shoes look good with jeans. Like a bar mitzvah but different

Just witnessed a guy with southwest priority boarding choose a middle seat. Pretty discomforting to know there’s a serial killer on my flight

He follows golf too

Hey @TigerWoods if u decide to make ur comeback at the Zurich I’d be honored to be ur partner. We can even play ur ball in alt shot. Call me

U spelt “max homa” wrong 5 times but whatever https://t.co/ZmWXiKo0V9

Kiz may be leading the golf portion of this major but the real battle is going on between DJ, Koepka & Woodland for coolest walk. Tight race

Someone on the golf telecast said Justin Rose misread his putt because he thought it would break toward the water. On the island green pic.twitter.com/riVkhRb90O

When I was 10 years old I really thought I would’ve had to deal with quick sand and volcanoes by now. Instead it’s just taxes and bogeys

While walking off the 18th tee today, nearing the end of a pretty difficult/breezy day, my caddy said that if golf were easy it wouldn’t be fun. It was a deep and philosophical comment. I wanted to punch him

He does have plenty of great random thoughts though

Why does brushing your teeth over the kitchen sink feel so wrong?

Becoming an adult starts with getting a Costco membership. Anything after that can vary

*when golf digest says u need to use the ground for more power* https://t.co/bFQQ04LLmg