Matt Kuchar comes to grips with coming up short 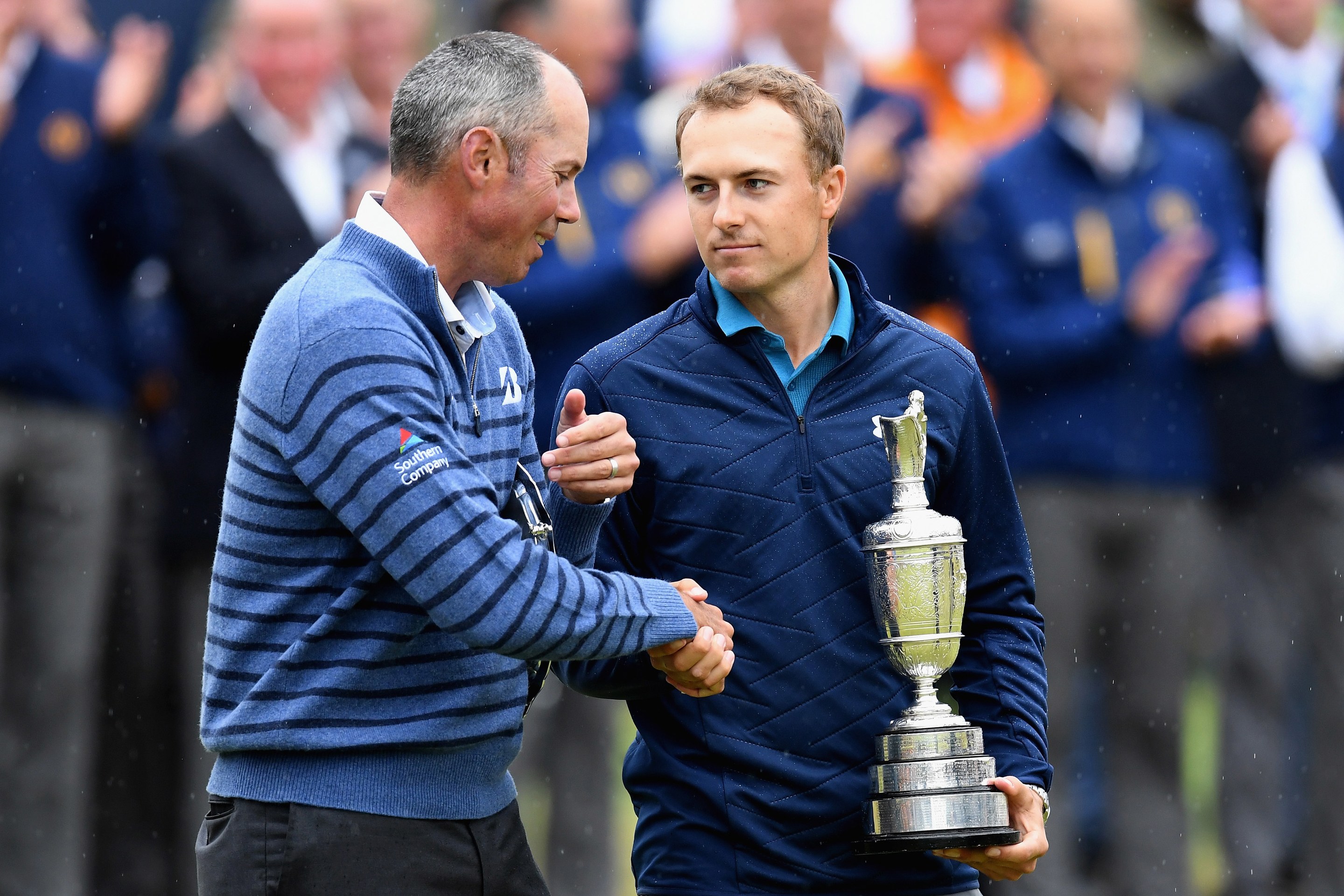 The PGA Tour veteran has had near misses at big events before. But his British Open loss presents a new challenge.

By Tim Roseforte
Matt Kuchar keeps his bronze medal in a sock in a backpack, an heirloom that can be passed on to future generations. By “winning” the bronze medal, Kuchar admits to treating his third-place finish in the 2016 Olympics like a personal victory, something he will always treasure.

Traveling back to North America with the silver salver for second place at last week’s Open Championship, however, didn’t quite resonate the same way. As an Olympian, the sense of pride was hard to hide on the medal platform with Justin Rose and Henrik Stenson in Rio de Janeiro last August. At Royal Birkdale, it was impossible for Kuchar to hold back the tears. 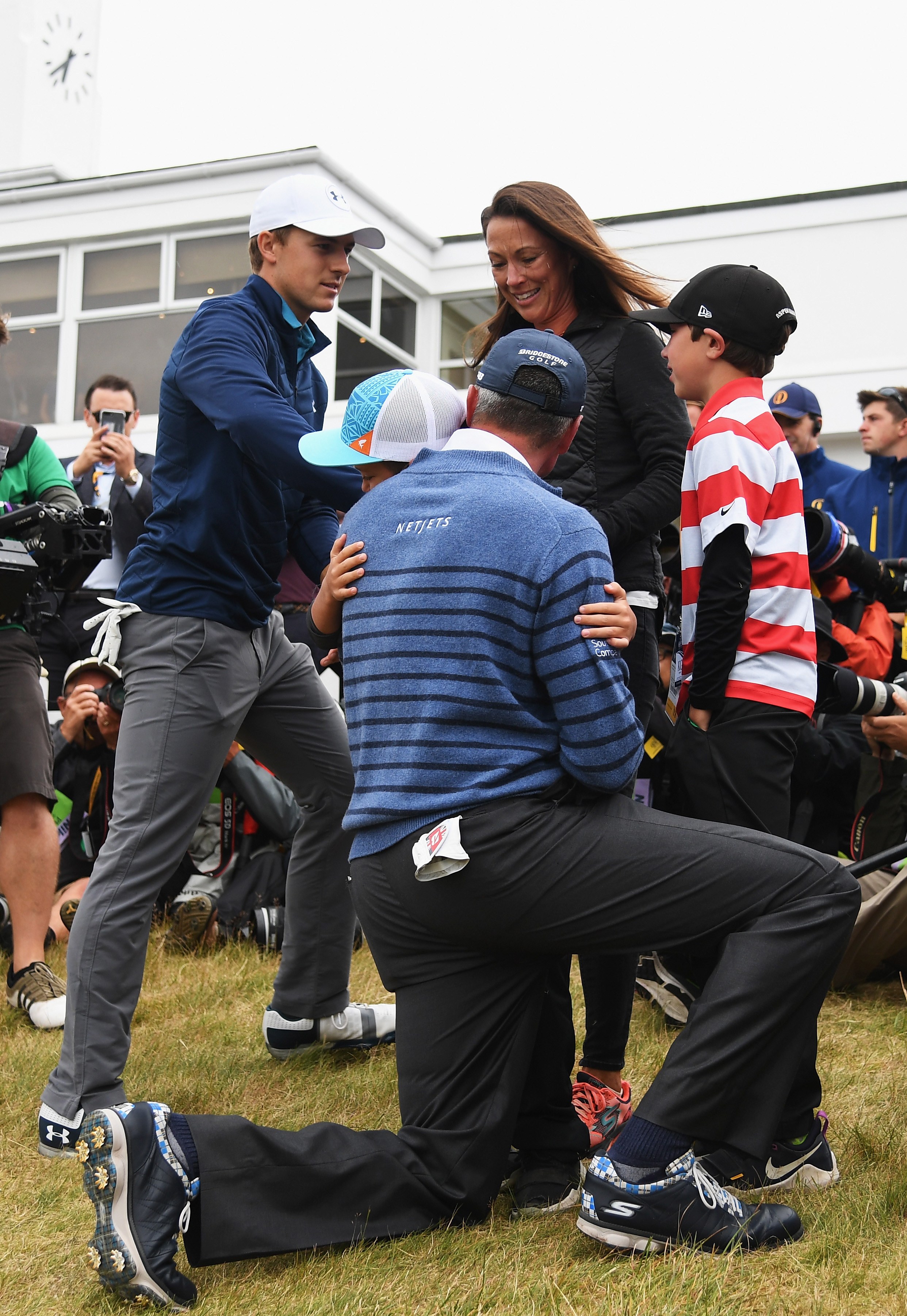 Matthew Lewis/R&A
As the victorious Spieth passes by, Matt Kuchar is surprised by his family who flew overnight to attend the final round at Birkdale

Those emotions poured out when he first caught sight of his wife, Sybi, and his sons Carson, 8, and Cameron, 9. They flew to England overnight from a vacation in Colorado to surprise him. Seeing his sons’ sadness in the misty rain caused Kuchar to be break down in the scorer’s tent. He described the hurt as “crushing.”

“When your kids are young, they look up to you like you’re Superman,” Kuchar said a few days later at the RBC Canadian Open. “Kind of you’re their hero. You’re the one to protect them and save them and do great things. And when it doesn’t work out, and you aren’t the hero holding the trophy, it’s saddening as well. I saw the look in their eyes, and I wanted to be that guy. So I was a little bit broken myself that I wasn’t that guy.”

Kuchar didn’t bring home the claret jug, didn’t win his first major championship and isn’t going to be called “Champion Golfer of the Year,” after losing a duel to America’s golf Superman in Jordan Spieth. But he did earn further respect from his peers—and admiration from those witnessing the way he played on Sunday and handled the loss—after being beaten by one of the great back-nine performances in major championship history.

“I believe Matt Kuchar will win a major championship,” Speith confided in the press tent at Birkdale. “And I believe that he’ll do it sometime soon. He’s a great champion, and he’s such a great person. And he’s a great individual to look up to. He’s one of these guys, when I talk about having great role models on the PGA Tour, and I’m fortunate in that, he’s at the top of the class. And you’re able to see it with how he handles that kind of situation right after just a crazy day.”

The ending caused Kuchar to reflect on his playoff loss to Matt Jones in the 2014 Shell Houston Open. Kuchar bogeyed the 72nd hole the day. Jones made a 46-footer on the final green in regulation to tie, and then won with an incredible chip in. When their flight home was delayed, Kuchar took his children to a bowling alley for a life lesson. “I had to tell them, I said, ‘Listen, you do your best. You play your best, you try on every shot, and sometimes it goes your way and sometimes it doesn’t.’ You have to learn that these things happen.”

While having practice in this department, Kuchar has won plenty of big events, too. Among his seven career victories are wins at the Players, the Memorial Tournament, a WGC Match Play and a FedEx Cup playoff event, plus his U.S. Amateur title. It’s easy to list Kuchar as one of the better players without a major. But it’s also important to note that the third and fourth rounds at Birkdale were only the third and fourth times he played in the final group of a major on the weekend.

Having turned 39 last month and in his 17th year on the PGA Tour, Kuchar believes he should have won more than he has. He ranks 13th in all-time career earnings with more than $40 million. The Open was his 90th top-10 all-time, but only nine have come in majors, two this year after a T-4 at The Masters. He is 0-for-47 in majors and hasn’t won a tour event since 2014.

Rather than sulk about his near miss, Kuchar did what he always does. He moved on, honoring his commitment to play in this week’s tour stop at Glen Abbey. He shot an opening-round 71 on Thursday, although afterward he said he felt dizzy during the day, even seeking medical help during the round. Unclear what caused the faintness, Kuchar was optimistic it was just temporary.

There will be more big events in the coming weeks, the PGA Championship on the horizon and the FedEx Cup playoffs again looming. Friends and family have reminded Kuchar there are plenty of positives to take from Birkdale. So it is that he is trying to look at it the way Superman would, the way a bronze medalist would.

“There are such great lessons that come from golf,” he conceded. “You know, this was one of them.”

As most people in golf would say, it couldn’t have happened to a nicer guy.