He has no regrets, but Justin Rose knows that this ‘is one that slipped by’ 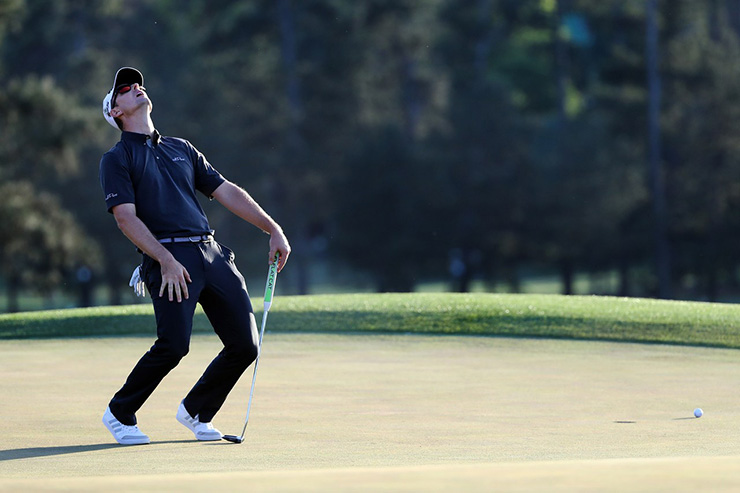 AUGUSTA, Ga. — Just seven feet of smooth-as-felt Augusta National green separated Justin Rose on the 72nd hole of the 81st Masters from being able to seemingly slip his arms into sports’ most famous jacket.

Through his first five holes in Sunday’s final round, such a thing seemed quite unlikely. Rose was one over, and the man he was sharing the stage with the last twosome, Sergio Garcia, appeared in command of the tournament.

It was a putt Rose—and everyone else—had seen before, a zillion times before. Right of the Sunday flag on the 18th hole, the ball will break gently to the left. It did for Mark O’Meara, from 20 feet, in 1998. It did for Adam Scott, too, from a similar line and distance in 2013.

Rose’s attempt was from a lot closer.

“It was a good putt,” he said. “It’s a putt I’ve practiced. When you come to Augusta National, that’s the putt you practice. I trusted that it would break because in practice, that’s what I’ve been seeing.”

The ball never broke left, staying high and staying out, burning the edge and singeing Rose’s best chance for victory.

When Garcia missed his putt to win from two feet closer—but from above the hole—the two men headed back to the 18th tee for a sudden-death playoff. On the first extra hole, Garcia would win after Rose pushed his tee shot into the right trees, was forced to punch out and couldn’t get up and down, missing a putt from the same line and watching his ball break across the hole after not hitting it quite as hard.

“I would say this one probably is one that slipped by, for sure,” said Rose of the chance at his second major title, shooting a closing 69 to finish the week at nine-under 279. “I can’t pick holes in my performance. I felt fantastic out there. I felt cool, calm and collected. And you know, barring a great comeback from Sergio, it was mine to cruise to the house. But it’s not always that easy.”   Rose should know.

Four years ago, he won his first and only major, the U.S. Open at a treacherous Merion, where he closed with a couple of impressive pars on the brutal 17th and 18th holes, the latter coming following an approach from more than 250 yards.

Two holes at Augusta National were key on this Sunday, too.

Leading by two over Garcia when they arrived at the par-5 13th, Rose reached the back of the green in two, while Garcia pulled his tee shot left into the pines, eventually taking an unplayable lie when he got to his ball

But Rose took three to get down from the back of the putting surface, missing a six-footer for birdie, and Garcia salvaged par, getting up-and-down from 89 yards by making a seven-footer not to lose any ground.

With Rose clinging to a one-shot lead in what had become a mano-a-mano duel down the stretch in the Georgia twilight, the 36-year-old Englishman came up short on his approach from 180 yards to the back pin, landing in a greenside bunker.

He pitched out to seven feet, but inexplicably left the putt short and made bogey. Garcia, meanwhile, two-putted from 30 feet to pull even with Rose.

The last time both players in the final group of the final round of the Masters came to 18 tied for the lead? It was 1998, when O’Meara and Fred Couples were all knotted up, along with David Duval, who was already in the clubhouse.

O’Meara’s putt took the break and found the center of the cup.

If there’s any solace for Rose, it’s that he was beaten by Garcia more than he beat himself.

“Nothing but good things to take away from this,” Rose’s coach, Sean Foley, said via text. “The pain is part of it; always has been and always will be. But one over through five and he played the next 11 holes in five under? That’s clutch.”

So, too, was Garcia, who exorcised his major demons with a final-round 69 and a 12-footer for birdie in the playoff.

There was a great deal of sportsmanship between the two throughout, one applauding the other after each terrific shot.

“If there’s anyone to lose to, it’s Sergio,” Rose said. “He’s had his share of heartbreak.”

There will be some of that for Rose as well. But he will try not to let it linger.

“It’s going to sting for sure,” he said. “But you know, I really feel like this is a tournament that I can still go on to win. I’d like to win three or four green jackets, but one would be enough, you know. I just want to win here.

“For me, golf is about April to September,” Rose continued. “That’s where the big tournaments are. That’s where the tournaments that change your career are. So this is the first one of four. I feel motivated for the summer, and I will be moving on and setting goals very quickly after this.”