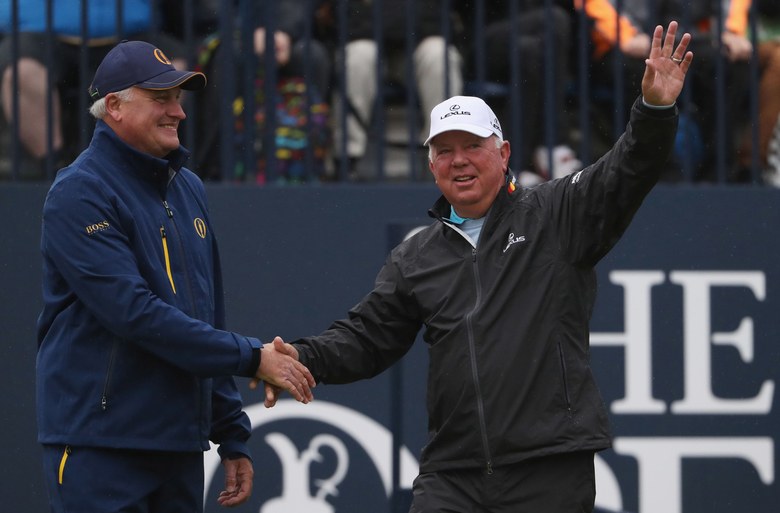 By John Huggan
All the pieces were in place for Mark O’Meara on Friday at Royal Birkdale. His son, Shaun, was on the bag. Two holes before he had just made his 300th birdie in Open Championship play. And, amazingly after opening with an 81, he was one under par for the day playing the final hole. But this was it for the 1998 champion golfer of the year. At age 60, it was the last year of his eligibility in the game’s oldest event after 31 appearances, his first in 1981 at Royal St. George’s.

Just about the only glitches of his final round were the beginning and the end. Hitting the first shot in his last British Open, the former Masters champion sent his ball way to the right and out-of-bounds en route to a quadruple-bogey 8. Then, after sending his 8-iron approach just over the 18th green on Friday, one of the finest putters of his generation needed three more to get down, finishing with an even-par 70.

“This is the greatest championship,” said O’Meara, his eyes a little moist around the edges. “I know there are three other majors, but I truly believe that the Open Championship is the top of the list in my book.

“I felt the warmth of the crowd coming up the 18th hole. I’m not Tom Watson. I’m not Jack Nicklaus. I’m not Arnold Palmer. I’m just a guy who in ’98 was lucky to win this championship. And for me to have Shaun and my daughter, Michelle, alongside me this week was special.”

Inevitably, talk turned to memories of championships past.

“On the Tuesday before my first Open in ’81, I played a practice round with Jack Nicklaus, Gary Player and Seve Ballesteros,” O’Meara said. “Three legends. It was a little intimidating. We played for, I think, a $25 nassau, which was a lot for me at the time. Gary and Seve were giving Jack the needle about never paying when he lost. Which didn’t really come up as Jack and I won.”

And the highlights apart from his 1998 British Open triumph?

“I remember how I felt in 1991 here when I played in the last group on the last day with Ian Baker-Finch,” he continued. “I was happy for my friend. And then seven years later, when I won, I was in the clubhouse when I felt hands on my shoulders. It was Ian. He had a tear in his eye because I won. That’s the stuff you never forget.”

Round in 70. Receiving a nice ovation all the way up 18. And a hug from his son when it was done. All in all, not a bad way to go.