What makes the The Open the best of the four majors 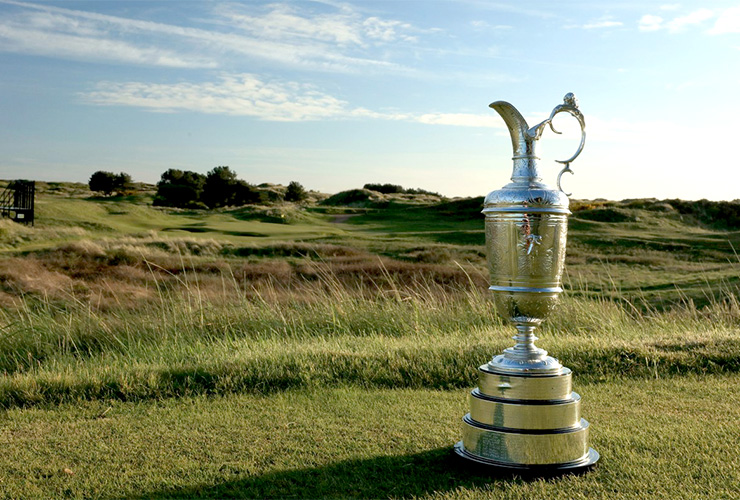 About to attend his 30th Open, our writer explains the quirks and oddities that set the championship apart
By Jaime Diaz

The British … I mean the Open Championship is my favorite event. Professionally, it’s the best of all to cover. Personally, the entire weeklong experience never fails to leave me with a feeling of renewal.

I’ve marked the trips with mementos. Never thrown away one of the bargain cashmere sweaters I got in the 1980s when the pound was weak, or any of the too-many lithographs of cult classic courses that I’ve never framed. Many of the best books in my golf library came from Quarto, a musty secondhand bookstore at 8 Golf Place in St. Andrews, which sadly closed in 2006.

All majors are a wonderful gathering of golf people, but The Open is different in that everyone plays golf during their visit. The midsummer light allows early morning rounds (which allow a return to the media center by 10 a.m.) or, even better, late evening nines that leave you the best version of tired.

Every Open is a pilgrimage to ancestral ground. It reminds you of how you arrived in the game, and why you stayed. I think I got a head start on the links spirit by being from San Francisco, with its gray, cool, blustery climate. The tawny hue of seaside grasses and smell of the ocean took me back to Lincoln Park, where the rumpled and barren fourth hole tumbles with ancient feel. My formative moments are why the Peter Thomson description of controlling an iron shot—“The thrill of squeezing a ball against the firm turf, trying to keep it low into a buffeting wind, is something that lingers in the mind forever”—will always be one of my favorite sentences in the golf canon.

My first links experience was at St. Andrews, in 1974. I got there near the end of a month-long Eurail pass, getting off at the small station at Leuchars, the town that Bernard Darwin wrote would send him “into ecstasy” when he heard the conductor call it out. If memory serves, my round on the Old Course cost £3.50. Tip Anderson, Arnold Palmer’s regular caddie at the British Open, looped in my group.

The first Open I worked was at Lytham in 1988. Notebook in hand, the links seemed to intensify the senses. The air, full of salt and chlorophyll, was energizing. The turf seemed springy, and on a wide, flat expanse of land with no trees or water hazards, it was easier to see. The shots the pros faced, especially with the wind blowing, seemed more interesting. And the way the last hole finished hard against the clubhouse, as it does on several courses on the Open rota, lent majesty to the final act.

This will be the 30th Open I’ve attended as a golf writer. I refreshed my memory by matching the years with the winners, but what usually came to mind were the stories of the losers.

1988—My father followed his countryman, Seve Ballesteros, the whole final round, a Monday finish in which I relied on him for notes and observations so that I could nervously peck out a story on the fluttery three-inch screen of the long departed but not missed Teleram Portabubble. 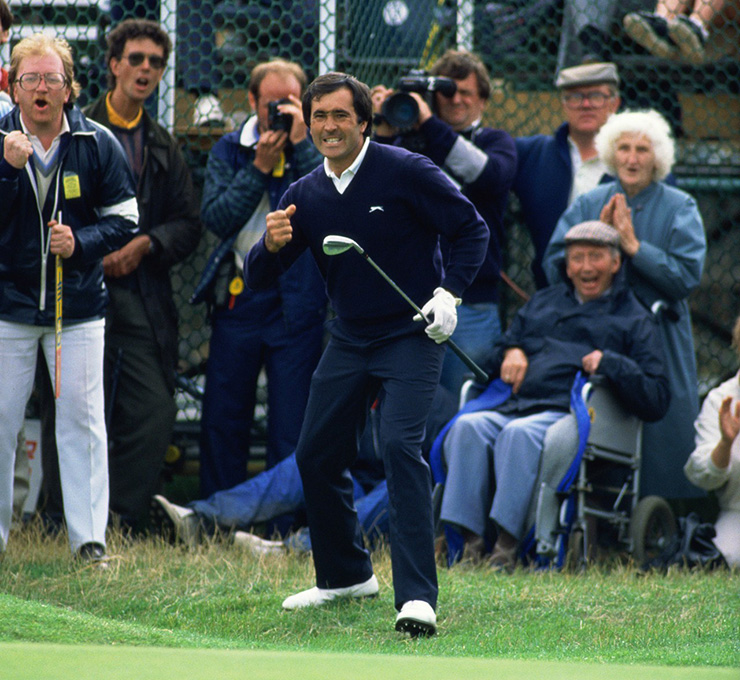 Seve Ballesteros moments after chipping a shot inches from the final hole to win the 1988 Open Championship at the Royal Lytham. (Photo by David Cannon/Getty Images)

1989—Mark Calcavecchia’s perfectly flushed 5-iron to six feet on the 72nd hole at Troon to get into the first four-hole playoff ever, which was magical in the gloaming. Watching Greg Norman absolutely rip a burning cut off the last tee that he absolutely believed wouldn’t reach the bunker. It did.

1990—Nick Faldo’s surgical assault of the Old Course, winning by five with a display of old-school control golf that I’ve never seen surpassed.

1991—Ian Baker Finch, elegant swinger, great putter, shooting 29 on Birkdale’s front nine on Sunday to take it. Two years later, he was utterly lost and basically finished. The dread of such fragility exists in every player.

1992—John Cook three-putting from 20 feet for a par on Murifield’s par-5 17th, then bogeying 18 to lose by one. More reinforcement for my already dark view of the inner game.

1994—Nick Price stole it by a stroke from Jesper Parnevik, who bogeyed 18 at Turnberry as Price made a 50-footer for eagle on 17. But Tom Watson gave it away on the greens. A few hours later, after a long dinner, Jack Nicklaus joined Watson for an impromptu round in the dark on the Turnberry pitch and putt. Nicklaus’s blend of unaffected support and pitch-perfect needling was a clinic in emotional intelligence.

1995—John Daly! The next day I was walking near the 18th tee when I saw Mike (Fluff) Cowan come off the Road Hole. He let me carry his bag on the last as he neatly completed a 71. 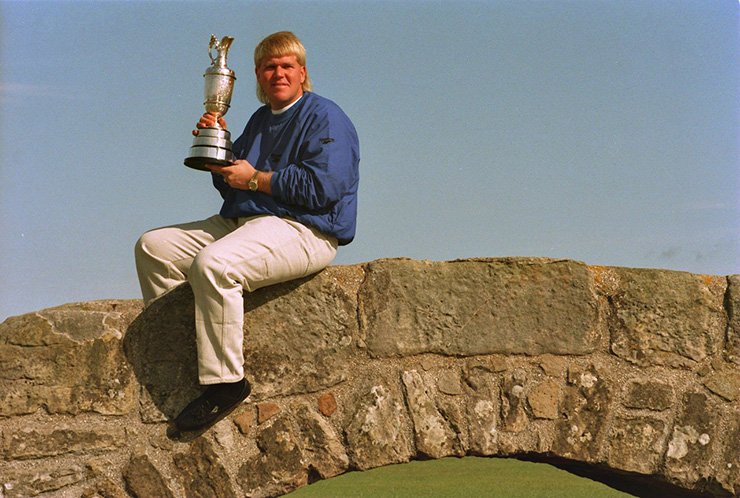 John Daly poses with the claret jug after his surprise Open Championship victory in 1995. (Photo by J.D. Cuban/Getty Images)

1996—After his second-round 66 at Lytham (he would finish T-22), Tiger Woods told me he knew he was ready to turn pro. He did so six weeks later.

1997—At that time, Justin Leonard and Phil Mickelson had a rivalry, and Leonard took the lead with his closing-65 victory at Troon.

1998—Mark O’Meara suddenly had two majors with his win at Birkdale, causing everyone to forget that Brian Watts almost beat him by nearly holing a long bunker shot from an impossible lie on the 72nd, or that Woods chipped in on the 71st and made a 30-footer at the last to miss the playoff by one.

1999—Nobody remembers that Jean Van de Velde’s eight-footer for triple bogey to get into a playoff is one of the bravest putts in history.

2000—Watching, on Wednesday’s “Champions Challenge,” 88-year-old Sam Snead doing a little jib on the Swilken Bridge and 77-year-old Roberto De Vicenzo drive it pin high on 18. As for the main event, in my opinion, it was the best Tiger ever played. 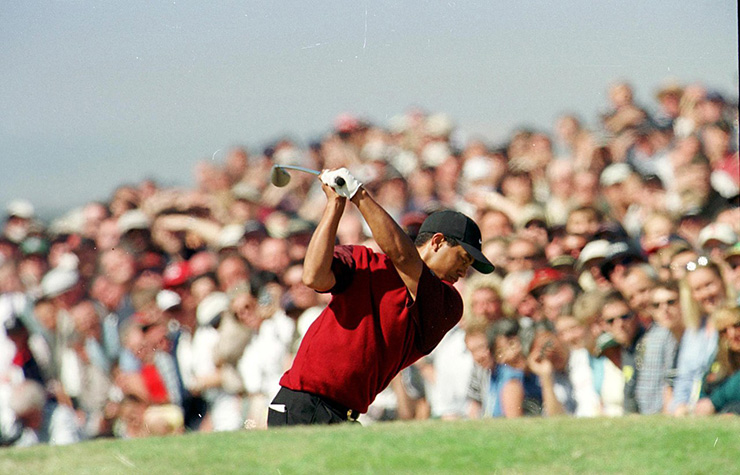 Tiger Woods tees off in his quest for the Open title on the final day in 2000 at St. Andrews. (Photo by Jon Buckle – EMPICS)

Have to admit, much in the way I can remember the lineups of Willie Mays’ Giants teams of the 1960s better than I know those of the franchise’s recent World Series winners, my memory generally isn’t as specific for the Opens of this century.

2005—Jack’s final stroke in a British Open, an 18-foot downhiller for birdie on the 18th at San Andrews, bringing playing partner Watson to tears.

2007—At Carnoustie, swing instructor Hank Haney betrayed worry that Tiger Woods was beginning to show indifference toward the game.

2008—The wistful look of Linn Strickler, Greg Norman’s caddie, coming up the 72nd hole, with Norman’s impossible dream of winning at 53 gone. A quote machine known from his raucously witty heyday with Curtis Strange, Fred Couples and others as “The Growler,” Strickler would have been as good comeback story as his boss.

2009—The huge first bounce taken by Watson’s perfect 8-iron approach to the 72nd hole at Turnberry. For his third from a tricky spot over the green, Watson chose the putter, which Nicklaus later told him was the right play. He was being nice. One of the greatest chippers ever should have chipped it. 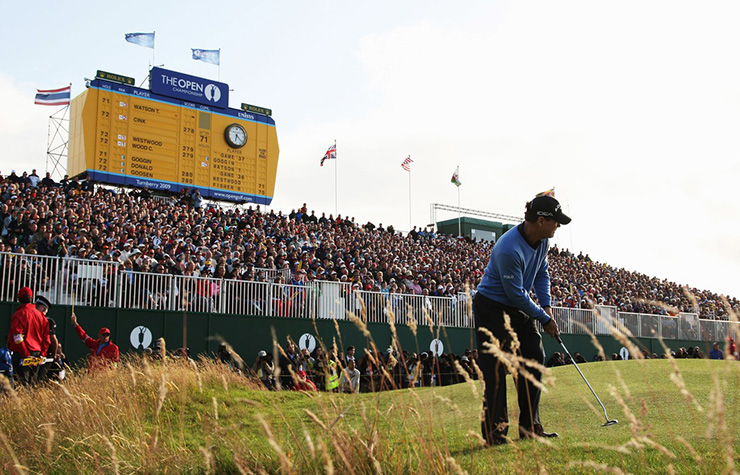 Tom Watson watches his birdie attempt on the 18th green during the final round of the 2009 Open Championship at Turnberry. (Photo by Ross Kinnaird/Getty Images)

2012—Never felt as bad for a runner-up as I did for Adam Scott at Lytham.

2016—The sound of Henrik Stenson’s iron shots during his Sunday 63 at Troon.

This year at Birkdale will leave other memories, but going in I know I’ll spend some time on the tee at the 12th hole, a 183-yard par 3 that fits so perfectly amid vast dunes that it might be the most beautiful hole in the British Isles. And I’ll feel renewed.