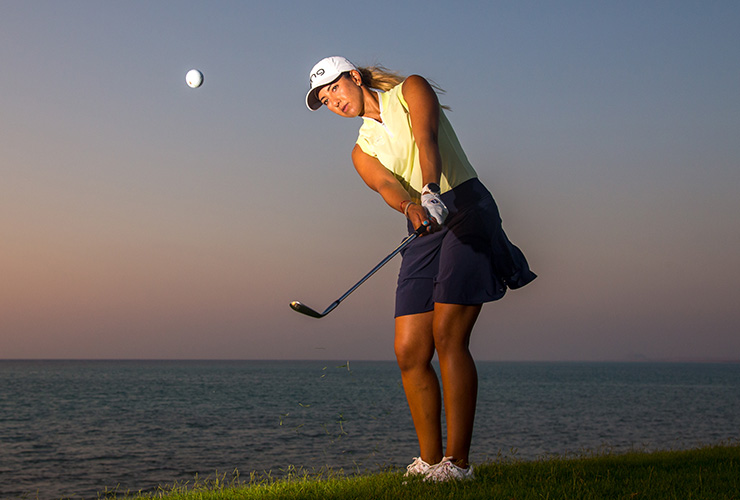 By GolfDigestME.com
Maha Haddioui, the first ever Arab to play professionally on the Ladies European Tour (LET) has spoken about her experiences as a female golfer in Morocco, the changes in Saudi Arabia, and her hopes for the next generation of aspiring young women wanting to chase their dreams.

The 33-year-old double Olympian (she competed in 2016 and 2020 and famously hit a hole in one at the Tokyo Games) broke new ground when she joined the LET 10 years ago and spoke to the ‘Power of the Game’ podcast with Golf Saudi about her journey and the changes she has seen along the way.

“I got into golf very randomly as a kid as we lived near a golf club and my parents decided to go there for lunch one day,” Maha explained. “I was running around the course with my sisters when the caddie master invited us to hit some balls on the range. I was not interested as I thought golf was a game for old people and my mother had to persuade me to give it a go.

“I found out I really liked it and that was the start for me. It is amazing how small things like that can have such an impact on your life and if my mum hadn’t encouraged me I would not be here.

“My parents didn’t play golf and there was no interest in the game in our home, so for my mum to persuade me to give it a go was great.”

The game has grown significantly in the Middle East – and not just through tourism and expat participation – and Maha is thrilled to see countries such as Morocco and Saudi push golf among locals as well as tourists.

“Most people in the Middle East have never really played golf – with a club in their hands – so I am always telling them to give it a go. Now I get so many messages from those who have discovered the game and see how much fun it can be,” she said.

“I am in my 10th year and now I am not the only Arab female on tour. Ines Laklalech, who I have known since she was little in Morocco, has joined the LET and that is a huge statement of how we are growing the game for females in the Arab world as we now have two women representing.

She modestly added: “I would never say myself that I was her inspiration but it is such an honour to hear her say how much I influenced her growing up.

“There has been such a key shift with local boys and girls getting into the game. As well as the two girls, we have the UAE’s Ahmad Skaik in the top 15 in the amateur rankings and the likes of Shergo Kurdi of Jordan doing well. It will only be a matter of time until we have an Arab winner of a big tournament.

“Just look at Saudi, in four years since the opening of the Royal Greens Golf and Country Club we now have the massive Saudi International for the men on the Asian Tour and the Aramco Series and tournament for the ladies. It has been pretty crazy to see the expansion and it is great to see how they are doing it to get the locals involved.

“Girls are being introduced to the game through the ‘Ladies First’ programme at schools and I think that is the only way to do it. How will they know if they like the game if you do not hand them a club? It is the only way to go. It is not just watching on TV or bringing in big names for a competition to take the money and then go home.

“To see kids get into golf is a huge win for Saudi and other Arab countries can follow this model and get youngsters involved through the schools.”