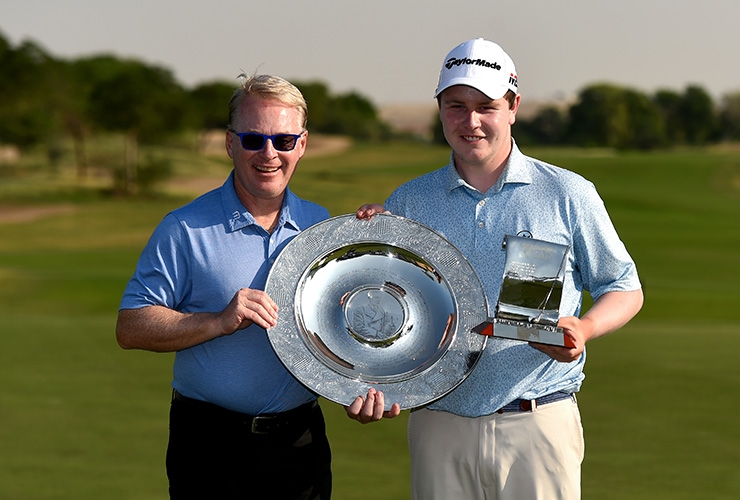 By Kent Gray
Robert MacIntyre has lauded the MENA Tour, saying his brief stint on the regional circuit proved the perfect launch pad to his dream debut season on the European Tour.

The 23-year-old Scotsman, who memorably finished T-6 in his Open Championship debut at Royal Portrush in July, wrapped up the Sir Henry Cotton Rookie-of-the-Year title honours with a share of 14th place at the DP World Tour Championship on Sunday.

He also claimed the top Challenge Tour graduate prize to continue an incredible rise that began with him winning the MENA Tour’s 2017 Sahara Kuwait Open in just his second start as a professional before graduating to the big league as a top-15 finisher on last season’s Challenge Tour.

MacIntyre revealed on Sunday how he turned down an invite to the Alfred Dunhill Links Championship just after playing in the Walker Cup in 2017, believing he was better served continuing his amateur apprenticeship in the Middle East.

The 2019 European Tour Rookie of the Year ? pic.twitter.com/vLAuZOBAhY

Bob, as MacIntyre prefers to be called, took up the story in the DPWTC media room after being presented his trophies by European Tour chief Keith Pelley.

“Well, it was actually my manager, Iain Stoddart, when we finished the Walker Cup, that normally opens an opportunity to play in the Dunhill Links, coming from Scotland,” MacIntyre started.

“So we decided to go to the MENA Tour. Then one random day, I just phoned up Iain and goes, ‘What’s the point of going out there as an amateur when we can go out there as a pro and make some money.’ So that’s what we done. Iain sorted it out. Obviously finished third and won my second start.

Here we are indeed. Not that it has been all plain sailing on the European Tour this season despite what has seemed a breeze to finish a creditable 11th in the final Race to Dubai scrub up.

What would you say was the breakthrough week or moment for you this year that convinced you to go on to do what you did?

“There’s only one week. That was the week off between Morocco and British Masters. We pulled out of the China event on the Friday prior to it. We were in Morocco, missed the cut. I wasn’t enjoying golf. Everyone knows I wasn’t enjoying golf and everyone on my team — I didn’t even want to be playing golf, if I’m honest with you, that week.

“So took the week off. Went and played some Shinty, and then that made me realise what life was about. It was an away game on the bus with the boys enjoying ourselves and made me realise that the job I’m doing isn’t a job. You’re doing it because you enjoy it, and that’s the mind-set I’ve had for the last 17 events and has made me realise, don’t find it a chore. Go and enjoy it every week, every day, and that’s what I’ve done. Here we are.”

Sadly in golf, the kudos comes and goes pretty quickly. And so, onto 2020. After going so close to a maiden victory twice this season, at the Made in Denmark in May and the European Open in September, what’s the goal?

“I’ve been shooting at the Top-50 in the world for the last four or five weeks. We’ve fallen just short, but the season’s opened up doors for me. It’s opened up WGC events. I was going to be playing another few events this year if I was in the position that I’ve actually found myself in, but I’m calling it a day this year. I’ve played enough golf.

“Next year, if I keep continuing to do what I’m doing on the golf course, then in my own head, it’s a matter of time.”