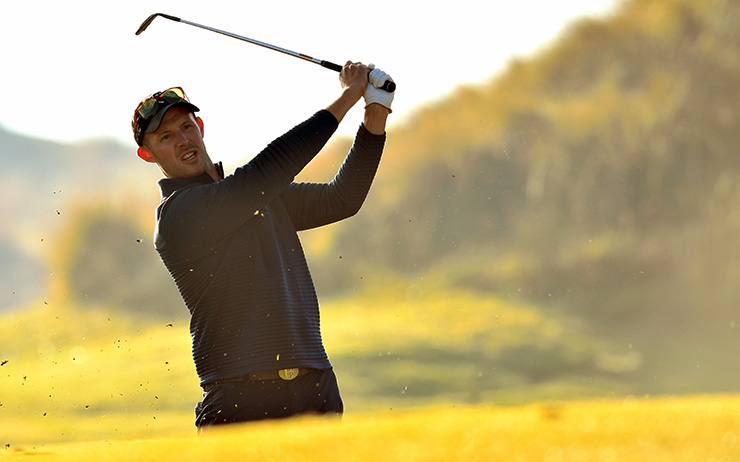 Quite which Luke Joy will turn up at this week’s Jo’burg City Masters is anyone’s guess. The 29-year-old Englishman’s form leading into the second event of the MENA Tour’s three-tournament South African swing has been confounding in its consistent inconsistency.

Sandwiched either side of a missed cut at the Mohammedia Open in Morocco in late March were creditable runner-up finishes at the Casablanca Open and the Mountain Creek Open in Thailand. More recently the Abu Dhabi-based Dorset pro backed up another unwanted weekend off at the Sunshine Tour’s Zambia Open with a third place finish at last week’s South to East Challenge in Benoni.

Joy still wasn’t entirely happy with his game at Ebotse Links, especially not the opening 74 he signed for in the co-sanctioned MENA Tour-Big Easy Tour (the feeder circuit to the Sunshine Tour) event. But closing rounds of 69-68 hinted that recent remedial work with the putter is beginning to pay off.

“Golf is very much about momentum and in Zambia and the start of SA there was none. But the final two rounds last week I holed a few putts to save par and then made a few putts for birdie that kept me going. It was by no means a flawless performance, just well managed,” said Joy who is navigating his fourth MENA Tour season and his sixth year as a pro in total.

“You never show up to lose but some weeks are more realistic than others. Last week I got a lot out of the final two rounds and I’ve done some good work over the weekend so the game is feeling better…the game is close.”

Regardless of what transpires over the 54-holes at Country Club Johannesburg from Tuesday, Joy is at least making progress in his goal to crack the European Tour. He’s improved his Official World Golf Ranking (OWGR) 916 slots to 632nd place since the end of 2014 and is in the mix to capture European Tour and perhaps even a PGA Tour start courtesy of his elevated MENA Tour ranking come seasons end.

Joy already has September’s KLM Open to look forward to courtesy of his second place on last season’s MENA Tour moneylist. It will be a second European Tour start after he was unfortunately DQed from February’s Omega Dubai Desert Classic.

“I’m looking forward to the KLM Open and just trying to keep improving and moving in the right direction. You never know what can happen in golf, a few good weeks can change your life and take you from struggling to comfortable,” Joy told Golf Digest Middle East.

“The goal is to play on the European Tour and then have the opportunity to play the PGA Tour as I loved my time in the United States from my college days at Drake University.

“I have a three-year plan working with my coach Matt Parker [formerly at Jumeirah Golf Estates] and his team at Prevail Golf. We have a short term and long term goals that I’m working towards to get my world ranking down. I have dropped some 1000 spots in nine months so we’re getting there…slow and steady wins the race.”

Joy is eyeing European Tour Q-School at the end of the year. Before then he would love to end a string of frustrating second place finishes which have followed his two MENA Tour wins – the Dubai Creek Open and ASCOPR Golf Citizen Abu Dhabi Open at Saadiyat Beach GC, both achieved in 2014.

Along with his current inconsistent form, Joy is also grappling with ever changing course and weather conditions from Morocco, to “hot and humid” Thailand and now Africa. The latest challenge is the thin air of Jo’burg where the golf ball “flies forever”.

An eight iron that normally travels 162 yards for Joy is suddenly going 175 yards at altitude which is a “slight adjustment that gets greater the longer the club”.

In the end though, it all comes down to forgetting some “pretty woeful” putting of late and getting the ball into the hole.

“I have gone back to some drills using Visio putting templates which has helped a lot. It gives you some great feedback and has helped with my confidence seeing the ball go in again. There was little difference in the performance of the two [Zambia and Benoni], I just managed my game better and holed some putts.”

Brazil’s Dubai-based Tiago Lobo, currently second in the amateur order of merit (OOM) standings, just three points shy of Switzerland’s Michael Harradine, will be the player to watch in the amateur division that has attracted six entries including Oman’s Sami Keating and India’s Arkesh Bhatia.

The Jo’burg City Masters is being played on the Woodmead course, one of the two 18-hole layouts at the Country Club Johannesburg.