Lucas Glover among three to play way into Tour Championship, knocking three out, including Shane Lowry 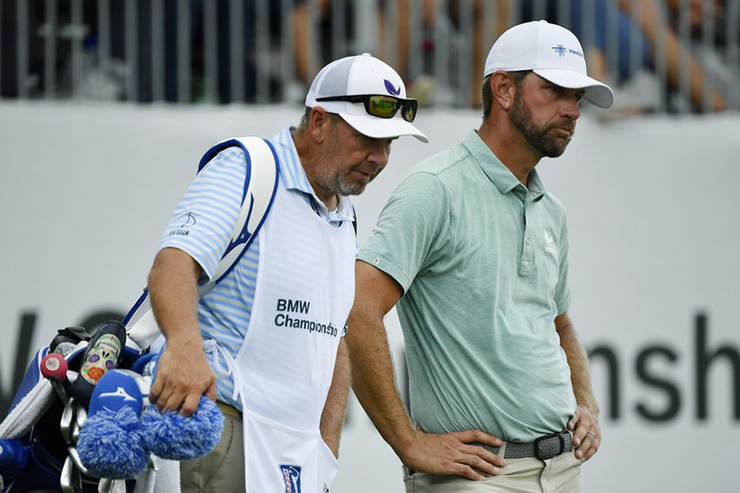 MEDINAH, IL – AUGUST 18: Lucas Glover reacts after his double bogey on the 17th green during the final round of the BMW Championship at Medinah Country Club No. 3 on August 18, 2019, in Medinah, Illinois. (Photo by Quinn Harris/Icon Sportswire via Getty Images)

By Dave Shedloski
As soon as he exited the scoring trailer Sunday afternoon, Lucas Glover shared a manly back-slapping hug with his caddie Don Cooper. He wasn’t just relieved and he wasn’t just happy.

“I felt some real satisfaction, not like winning, but, still, like I won a long battle,” said the 2009 U.S. Open champion.

That’s what getting to the Tour Championship takes. It is a long battle—season long—and Glover had come up short in each of the last nine years since his only major victory carried him to East Lake Golf Club in Atlanta. One year after finishing 135th in the FedEx Cup standings, which forced him to regain his card in the Korn Ferry Finals, Glover sewed up a berth in all four major championships in 2020 by virtue of finishing among the top 30 on the points list.

He squeaked in at 29th, surviving a bogey-double bogey spill coming home to shoot a three-under 69 at Medinah Country Club, good for a T-7 finish, his sixth top-10 and 15th top-25 in 24 starts this season.

“I wouldn’t be me if I didn’t make it interesting,” he said.

Glover was one of three men to play their way into the Tour Championship, and he came from the farthest back, improving 12 spots from 41st in the standings. The others were Hideki Matsuyama and Jason Kokrak. Beginning the week 33rd overall, Matsuyama made the biggest move, rising to 15th after he closed with his second nine-under 63 in three days for outright third place. Kokrak had to make birdie on the 72nd hole and hope for help. He got both, sinking a four-foot birdie putt and then watching Rory Sabbatini struggle when it looked like the Slovakian golfer might make the year’s final event for the first time since 2007.

An eight-year veteran, Kokrak will be one of four newcomers to compete at East Lake. The others are Corey Conners of Canada—who won the Valero Texas Open as a Monday qualifier—Mexico’s Abraham Ancer, and Sungjae Im of South Korea, the only rookie to make the finale.

“I knew I needed to make it, and I took care of business,” Kokrak, 34, of Cleveland, Ohio, said of his putt on the 72nd green. “Being eight years on tour, that [means] the world. To not win and make the top 30 is a pretty solid year. I never played the Masters. That would definitely mean I’m in all the big events. Go through the year a little bit different than I normally do.”

Of course, with three men ascending the final FedEx Cup standings, three others got elbowed aside.

Ireland’s Shane Lowry dropped from 25th to 33rd, but he probably is still celebrating his Open Championship victory at Royal Portrush and might not care. Harold Varner III, who finished joint third at the Northern Trust last week, lost his 29th position by falling all the way to second to last at Medinah at one-over 289, one of only two players in the 69-man field to finish over par. Finally, Andrew Putnam came in clinging to 30th, finished T-43, and fell to 34th.

The nearly man was Kevin Tway, who won the season-opening Safeway Open last fall. Starting the week 40th in the standings, Tway birdied five of his final nine holes for a three-under 69 and T-11 finish. Not good enough. He ended up in the dreaded 31st spot.

Dustin Johnson, despite finishing T-57 at Medinah, will make his 11th appearance in the Tour Championship, the most in the FedEx Cup era.

Glover, one of seven men who advanced to the finale without a win this season—Kokrak, Ancer, Im, Adam Scott, Brandt Snedeker and Tommy Fleetwood were the others—nearly played his way out after fighting his way in. He was six-under through 15 holes, climbing all the way to T-4 before missing greens at the next two holes and chopping them up rather thoroughly. His par at the last was good enough to sew up one more tournament start.

“I worked my ass off,” Glover said, his shirt soaked with sweat to illustrate the point.

“This means a lot,” added the 39-year-old veteran from South Carolina. “Obviously, the goal each week is to win. I didn’t do that this year. As far as that goes, I still got some motivation to work. As far as the year-end goal, this is pretty good. So, pretty excited and, from what I understand, I get to go to Augusta next year. Hadn’t been there in a long time. Pretty excited about that. And yeah, I’m proud of my season.”

Justin Thomas’ lead notwithstanding, let the jockeying for position in the FedEx Cup finale begin

Justin Thomas shoots 61 at Medinah, sets up potential victory lap for first win in over a year

Marc Leishman isn’t a big name, but he continues to show he has a big game

The clubs Marc Leishman used to win the BMW Championship

Wesley Bryan proves PGA Tour players can hustle, playing final round at the BMW in an hour and 28 minutes