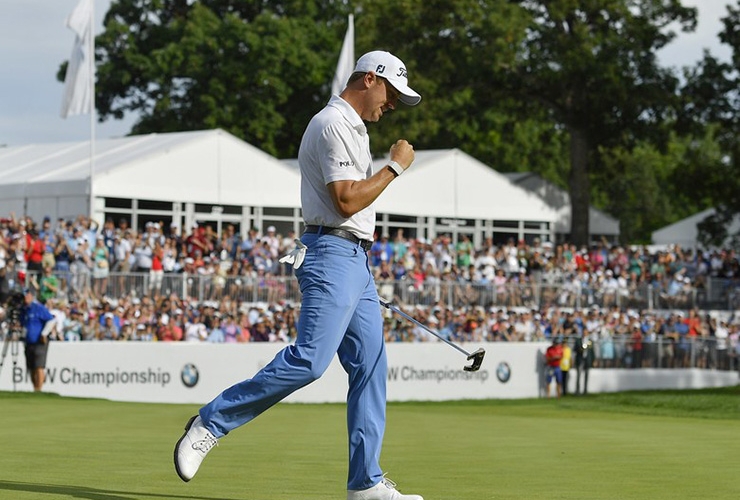 MEDINAH, IL – AUGUST 18: Justin Thomas celebrates on the 18th green after winning the BMW Championship at Medinah Country Club No. 3 on August 18, 2019, in Medinah, Illinois. (Photo by Quinn Harris/Icon Sportswire via Getty Images)

By Dave Shedloski
Clinging to a two-stroke lead after a bogey at the par-5 10th hole Sunday afternoon, Justin Thomas felt more comfortable than he had at the start of the day when he led the BMW Championship by six shots.

“If you would have told me at the beginning of the week, ‘Hey, you have a two-shot lead standing on the 11th tee on Sunday,’ I would be [saying], ‘Hell yeah, tell me where to sign right now,’ ” Thomas said. “If I have a two-shot lead with eight holes left, I feel confident I can pull it off.”

Quite the coincidence, because Thomas did indeed finish off his first victory in a little more than a year, holding off Patrick Cantlay to capture the BMW Championship for his 10th career PGA Tour title. His reward, along with $1.665 million, is—hey, what do you know—a two-stroke lead heading into next week’s season finale, the Tour Championship.

More on that in a moment.

A day after torching Medinah Country Club’s venerable but vulnerable No. 3 Course with a record 61, Thomas struggled for most of the final round before finding his resolve amid unrelenting pressure from Cantlay. Thomas birdied four of his last eight holes for a four-under 68 and finished three ahead of his fellow American at 25-under 263.

Thomas’ 10 wins over the last four years are second only to Dustin Johnson in that span, and JT became the ninth player in tour history to record as many victories, including a major, before age 27. He also moved up to fifth in the World Rankings.

“It’s nice. It’s felt like a long time since Akron,” said the Kentucky native, 26, whose last win came at the 2018 WGC-Bridgestone Invitational at Firestone. “I played not very well today but got it around pretty well. Patrick played unbelievably, put a lot of heat on me.

“In the end, it could have been good for me. It kept me focused,” he added. “I remembered that it’s really hard to win a golf tournament, and I’m glad that I was able to do so.”

Cantlay, 27, birdied four holes in a row, capped by a five-footer at the 10th, but he couldn’t gain further on the 2017 Player of the Year, who bounced back with a two-foot birdie at 11, saved par at the 12th with a 14-footer, and then answered Cantlay’s 15-foot birdie at 13 with a dagger of his own from 12 feet.

A short birdie from Thomas at the 15th cancelled out yet another by his nearest pursuer, and he was able to hang on and put himself in prime position for his second FedEx Cup title.

“Seemed like him saving par on 12 was big, and then, obviously, I tried to get one back on 13 and then he made it on top of me,” said Cantlay, who closed with a 65 to earn second alone at 22-under 266. His consolation prize was his first berth on the U.S. Presidents Cup team, joining Xander Schauffele and Bryson DeChambeau as rookie participants.

Hideki Matsuyama shot his second nine-under 63 of the tournament and surged into third at 268. That proved most painful to Tony Finau, who ended up fourth at 69-270. He needed at least a tie for third to earn one of the eight automatic berths in the final U.S. Presidents Cup standings. He finished ninth and will need a captain’s pick from Tiger Woods to compete in Australia in December.

When Thursday’s first round of the Tour Championship commences, Cantlay will find himself two behind Thomas again. Under a new format in place this year, the overall FedEx Cup points leader, Thomas, begins the tournament at 10 under, while Cantlay, who moved into second overall in the season-long competition, will start at eight under. Thomas’ lead over others in the 30-player field increases the farther down the list with a maximum of 10 shots over the last five qualifiers.

After Cantlay, the next three in the standings are World No. 1 Brooks Koepka, who starts at seven under, Patrick Reed at six under and Rory McIlroy at five under.

Thomas, who missed nearly two months with a wrist injury after the Masters, didn’t know quite what to make of it all. “I can certainly say a thousand per cent I’ve never slept on a Wednesday lead,” he quipped.

“I truly have no idea what to expect,” he added with a shrug. “There’s nobody in the history of this sport that has experienced it so nobody knows. I don’t know if it’s going to be weird or … it’s going to be different, I know that but I don’t know. There are so many variables and questions I have and this and that. If I birdie the first hole what am I at? I don’t know. Do I shoot a score, do I not? Whatever.

“Again, I know that I’m in a lot better position than I was at the start of the week. I just have to be grateful and thankful for that.”

McIlroy, Rose now chasing a Tiger from their past

Webb Simpson finally rids himself of ‘anchor’ that was holding him back, ties for Tour Championship lead

Justin Thomas, Paul Casey and Webb Simpson tied for the lead at the Tour Championship