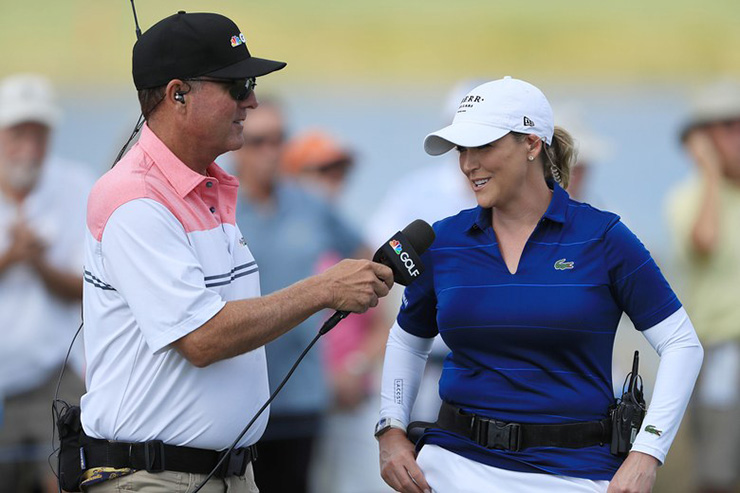 Jerry Foltz of Golf Channel talks with Cristie Kerr on the course during the 2019 CME Group Tour Championship. Kerr helped with on-course commentary during the event and will do so again at the PGA Tour’s Honda Classic. (Sam Greenwood/Getty Images)

By Brian Wacker
Twenty-five years ago Cristie Kerr won the Girls Junior PGA Championship at PGA National. This week, she’s back, without her clubs.

The 20-time LPGA Tour winner will be an on-course reporter for Golf Channel during for its coverage of the Honda Classic.

“It’s just kind of a fun thing,” Kerr said Wednesday. “It’s interesting to learn about [TV] and to be able to see if I want to do it after golf, and I know [executive producer] Molly Solomon pretty well from the Golf Channel, and she’s provided me with some opportunities to get some experience.

“I think I’m going to have a blast this week because I know I can’t play. It’ll be a lot more fun for me.”

It’s not a career change for Kerr—the 42-year-old tied for sixth in her last start at the ISPS Handa Australian Women’s Open two weeks ago. Nor is it a first for Kerr. She’s actually had two previous stints on Golf Channel, appearing in studio during the Sony Open in January 2019 and in the booth with Judy Rankin and on the ground with Jerry Foltz at the LPGA Tour’s season-ending CME Group Tour Championship last November.

A break in the LPGA schedule in part made this week possible, with the LPGA off for a month after three events in Asia were cancelled because of the outbreak of the coronavirus (though she hadn’t qualified to play in them).

What’s Kerr most looking forward to?

“The experience of all of it, and seeing the guys play,” she said. “I’m a huge golf fan. I watch as much golf as I can.”

There are things Kerr will have to get used to, like how far the men hit it. That said, she believes she can lean on her experience as a player to help offer insightful commentary.

“I can read a lot of what’s going on between player and caddie to see if they’re comfortable or confident, or they’re uncomfortable,” she said. “I’m going to try to report on what I’m seeing and not talk about what I don’t know.”

As for what type of reporter she’ll be, Kerr isn’t exactly sure, other than to be accurate and let events unfold naturally.

“[I’ll] tell if somebody hit a great shot, brilliant shot, somebody hit a bad shot,” she said. “Try to talk about what I do know and not try to make up for what I don’t know about the players out here.”

She’ll at least have someone to lean on in Paul Azinger, who began his transition into television in 2005 when he worked as lead golf analyst for ESPN and ABC. Azinger is now in the lead analyst spot for NBC regular PGA Tour coverage and for Fox Sports’ broadcasts of USGA championships.

The best piece of advice Azinger ever got? It came in his early days at ABC.

“Just remember, let the picture be descriptive, you be informative,” Azinger recalled. “We can all watch it with the mute button on.”