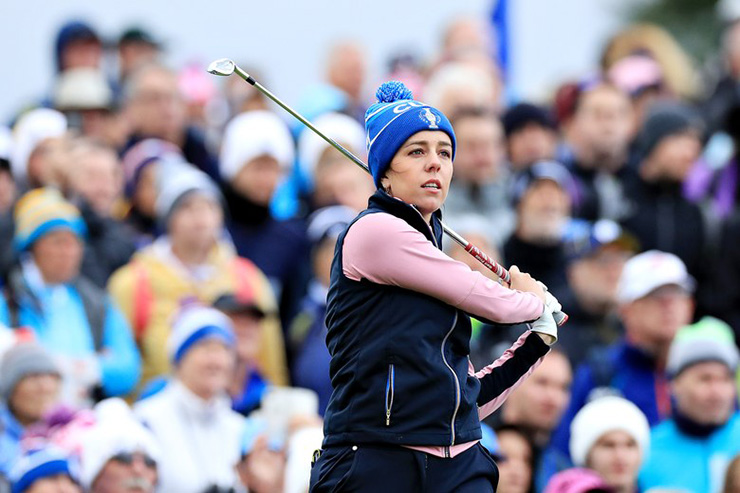 AUCHTERARDER, SCOTLAND – SEPTEMBER 14: Georgia Hall of Team Europe plays her shot from the tenth tee during Day 2 of the Solheim Cup at Gleneagles on September 14, 2019, in Auchterarder, Scotland. (Photo by David Cannon/Getty Images)

By Keely Levins
The LPGA and Ladies European Tour (LET) have announced a joint venture, with the goal of revitalising the LET.

The LET has been struggling with purse size and number of events on its schedule for several years. The partnership with the LPGA will address those issues as well as provide a straighter line of access to the LPGA Tour for high performers. That plan is not yet in place, but LPGA Commissioner Mike Whan said that the plan would be for top players from the LET to get spots in Q-Series, the final stage of LPGA Q-School.

“Two teams, joining for one common purpose, will create opportunities we simply could not have pursued on our own,” LET Board Chair Marta Figueras-Dotti said in the tour’s press release. “At its foundation, this joint venture is about creating opportunities for our members to pursue their passion, and their careers as professional athletes. In just the 60 days since we began working on this joint venture, we have already seen a dramatic impact on our LET Tour schedule – an impact that will be a positive result for virtually all of our LET Members.”

The 2019 LET schedule featured 20 events, which included the Evian Championship and AIG Women’s British Open, both major championships. With the partnership with the LPGA, the press release states that there will be more events in Europe. Eight LET events in 2019 were played in Europe.

“We have experienced incredible growth in women’s golf in the U.S., and this is an extraordinary opportunity to accelerate and expand the game in Europe as well,” Whan said.

Whan said that the reason the LPGA is getting involved goes back to the LPGA’s mission statement. “If you read the mission of the LPGA,” Whan said in a press conference at the CME Group Tour Championship, “it’s to provide women the opportunity to pursue their dreams in the game of golf, period.” Whan has been part of major growth for women’s golf in the United States during his 10 years as commissioner. The percentage of female junior golfers has climbed to 36 per cent from 20 per cent 10 years ago. During that same time, the LPGA Tour’s purses grew more than 80 per cent and the number of tournaments on the schedule has increased 50 per cent. Now, Whan and his team want to bring growth to Europe.

“We are thrilled to deepen our relationship with the Ladies European Tour in an effort to create the strongest possible women’s tour in Europe,” Whan said.