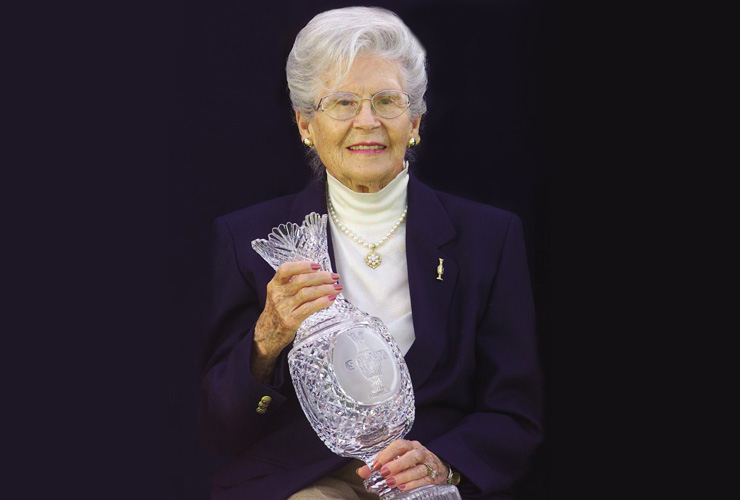 Louise Solheim, the wife of the late Ping Golf founder Karsten Solheim and by choice a silent partner in the family business, died on Saturday. She was 99.

“Our mother preferred working behind the scenes,” their son Allan D. Solheim said in a news release. “Karsten’s tinkering with putter designs in our garage began as a hobby, but it quickly turned into a thriving business. From the beginning, my mother assumed the administrative side of the business, allowing Karsten to focus on club designs.

“She was blessed with an incredible memory, which Karsten relied on regularly. Whether it was remembering someone’s name or the specifics of an event, she always had the answer. Together, they made an amazing team that formed the foundation for Ping today.”

Among Louise’s contributions to Ping was giving the Anser putter that revolutionised putter technology still widely used today its name. She also was involved in the founding of the Solheim Cup, the biennial women’s event featuring a U.S. team versus a European team that will be played for the 15th time next month in Des Moines, Iowa.

RELATED: How the Ping Anser putter, one of the most iconic clubs in golf history, came to be

“Our mother was a blessing to everyone in so many ways,” Ping chairman and CEO John A. Solheim said. “She had a special quality that gave her the ability to bring a smile to everyone’s face and she handled every situation with grace. We looked to her for guidance in all aspects of our lives and she always took great care to advise us, building our confidence to make decisions ourselves. We will miss her dearly. Our entire family is at peace knowing she’s now in God’s care.”

Louise is a member of the Arizona Golf Hall of Fame and was made an honorary member of the LPGA in 2004 and the Ladies European Tour in 2011.