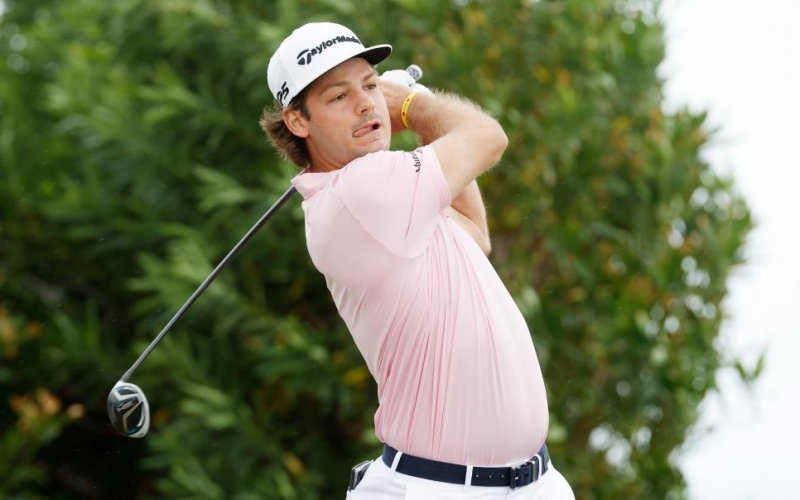 Gregory Shamus
Doc Redman plays his shot from the first tee during the third round of the Bermuda Championship.

By Daniel Rapaport
The last two weeks on the PGA Tour were more or less a case of the rich getting richer—limited field Invitationals, no cuts, pristine golf courses, perfect scoring condition. And, apart from some lesser-known Asian players getting exemptions, fields of mostly established players.

This week’s Bermuda Championship has a distinctly grittier feel. Apart from an unseasonably calm day on Thursday, there’s been a multi-club wind for players to deal with all week. And these players—most of the names at the top of the leaderboard are not exactly superstars. It’s a mix of up-and-comers, journeyman 40-somethings and guys trying to regain form they’ve lost.

Someone’s getting a life-changing win on Sunday
Only three players in the top 10 heading into Sunday have won a PGA Tour event—Brian Gay, who has four wins but none since 2013, and Matt Jones and Ryan Armour, who have one each. The remaining seven are chasing their first victory, and because this Bermuda Championship is no longer an opposite-field event, the victory comes with the full plate of riches: 500 FedEx Cup points (up from 300 last year), a spot into next year’s Masters and PGA Championship, and a two-year exemption that would essentially function as a three-year exemption for someone like Ollie Schniederjans, who does not have status on the PGA Tour this season. 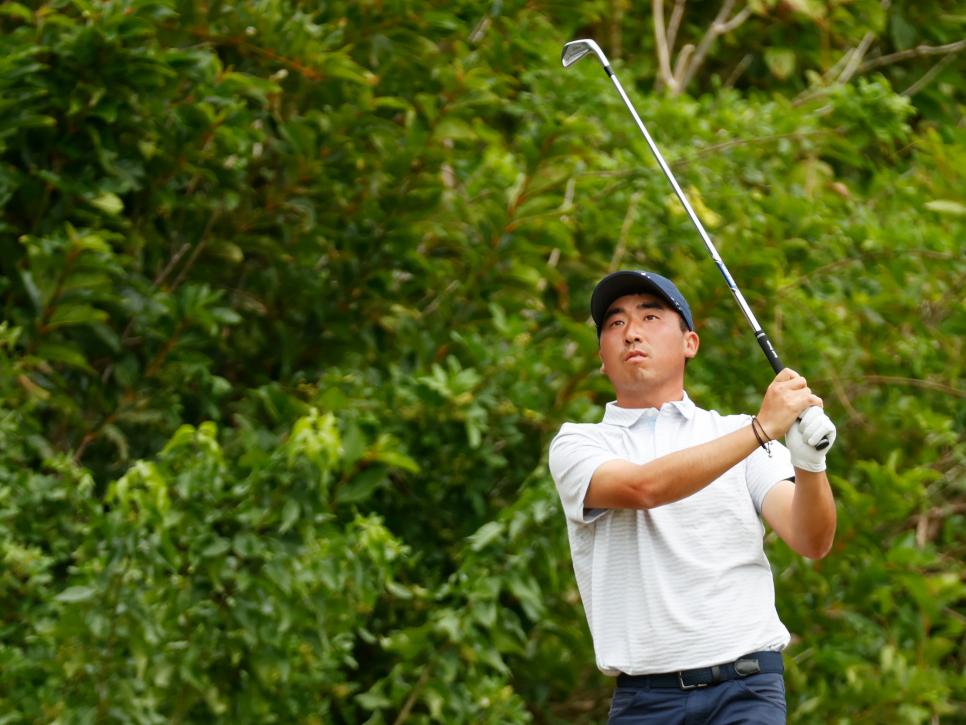 Schniederjans is two back of Doc Redman, who holds the 54-hole lead at 10 under after an impressive 67. Redman, 22, won the 2017 U.S. Amateur at Riviera and left Clemson University after two years to turn pro. Since then, he’s quietly established himself as one of the better young players on tour—sure, he’s been completely overshadowed by the Morikawa/Wolff/Hovland triumvirate, but those guys are unicorns, and Redman’s progress has been fantastic by any reasonable standard. The next step for him to take is getting that first victory, and he’ll have a great chance to do that Sunday.

The man Redman beat in the finals of that U.S. Amateur, Doug Ghim, is three back heading into Sunday. Gay is two behind, and at 48, a victory would make him fully exempt until he’s old enough to play the Champions Tour, which is kind of the dream. Hickock has just one top-10 finish in his 51 starts on tour. We could go on here, but you get the picture—a bunch of guys fighting for a career-changing victory. It’ll a different type of drama than what you saw last week, with three top-15 players fighting for another piece of hardware for their ever-expanding trophy cases. 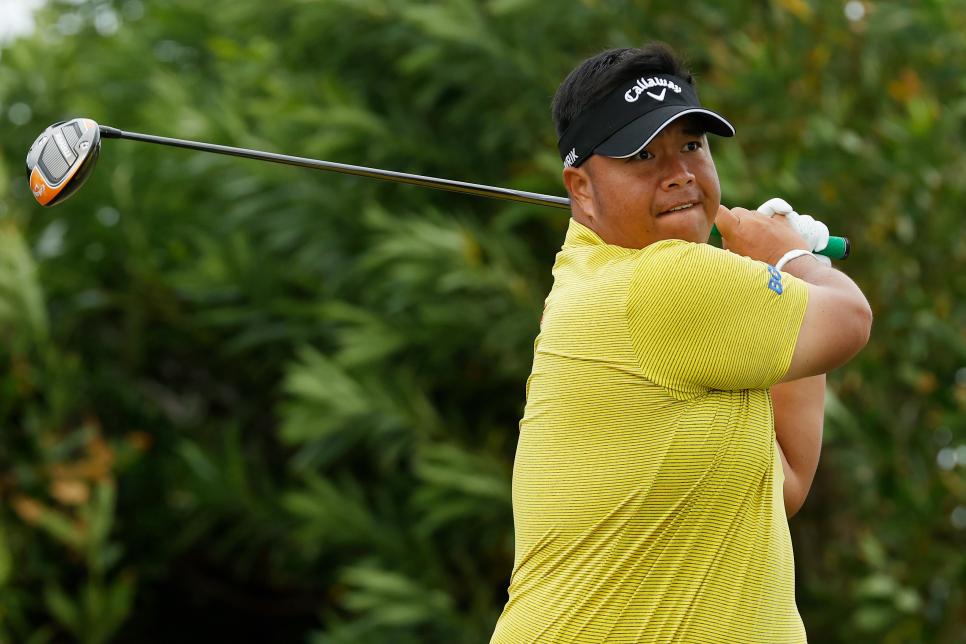 Gregory Shamus
Kiradech Aphibarnrat plays his shot from the first tee during the third round of the Bermuda Championship.

Kiradech is back, we hope

You won’t find a more popular player among fans or fellow players than Kiradech Aphibarnrat, the lovable Thai player with a … relatable … physique. He was a fixture in the top 100 for a half-decade and reached as high as world No. 29, but the Barn Rat has been struggling big-time for the better part of a year—he’s missed eight of his last 11 cuts around the world and does not have a top 10 since last year’s CJ Cup. As such, he’s dropped all the way to No. 236 and only has conditional status on the PGA Tour. He’s three back heading into Sunday. A victory would be his first on the PGA Tour, but a high finish would go a long way in helping him qualify for the FedEx Cup Playoffs and get his career back on track. We—and everyone else—are rooting for you, Kiradech. 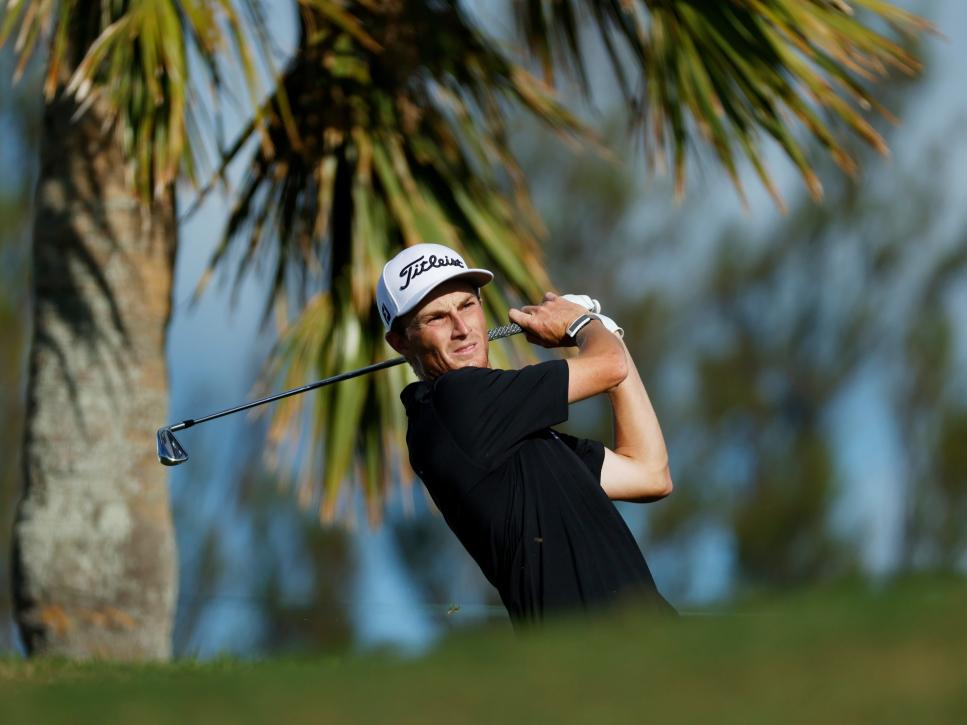 Gregory Shamus
Will Zalatoris plays his shot from the 17th tee during the first round of the Bermuda Championship.

Will Zalatoris is officially a PGA Tour player … kind of
As a colleague pointed out, the current leader in top 10s on the PGA Tour this season is not even a PGA Tour player. Will Zalatoris has been one of the better golfers anywhere since the June restart—the 24-year-old Wake Forest product was the best player on the Korn Ferry Tour this year and has continued his success on the Big Tour, with three top 10s on the young season already, including a T-6 at the U.S. Open. As a result, he’s now ranked No. 59 in the world, the highest-ranking of anyone without PGA or European tour status and ahead of guys like Jordan Spieth, Phil Mickelson, Corey Conners and Cameron Champ.

Zalatoris entered this week needing just over three FedEx Cup points to achieve Special Temporary Membership status, which would allow him to receive unlimited sponsor’s exemptions, rather than being capped at seven. He’s tied for 15th heading into Sunday after a third-round 67, meaning he has the Special Temporary status all but locked up. One of the best parts of professional golf is that at its core, it’s a meritocracy. Zalatoris is way too good a player to not be on the PGA Tour, and so the Golf Gods are seeing that he gets his tour card.

First Sunday with fans!
It’s not exactly a Sunday-at-a-normal-Masters atmosphere, but this week marks the return of fans to the PGA Tour. There aren’t grandstands or anything, but tomorrow will be the first Sunday back nine with (limited) fan noise as a soundtrack.

There’s been a lot of talk as to whether not having fans has benefitted younger players. The thought is, the kids don’t have experience closing the deal on a noisy Sunday, and the quiet finishes don’t feel markedly different from college tournaments, where they obviously had success. And again, Sunday won’t be electric, but it’ll be interesting to see whether having spectators will have any impact at all.