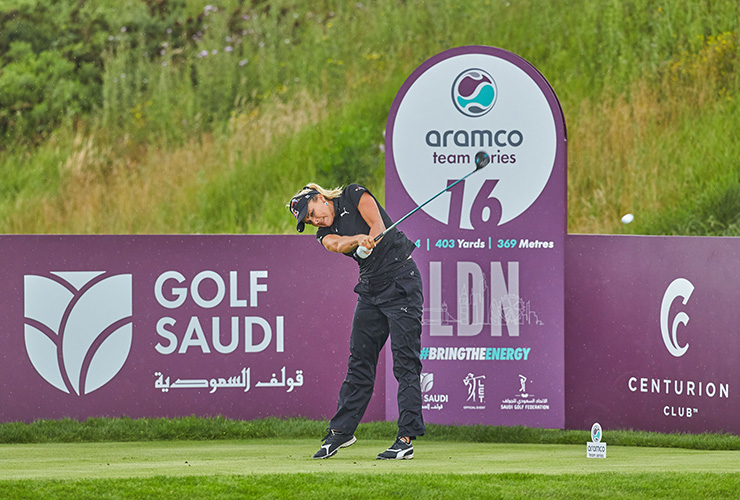 The Aramco Team Series is a brand-new concept and the first team event series on any professional tour, where the world’s best compete in concurrent team and individual contests.

The New York event is the third leg of the four-tournament Series and heads States-side following successful events in London (UK) and in Sotogrande (Spain). Six of the world’s top 20 will be teeing it this week at Glen Oaks Club in Long Island (October 14-16).

“Golf being such an individual sport, we don’t get this opportunity very often, so to be able to be part of a team, have two other pros, and an amateur in the mix is a great format that gives amateurs an insight into how we play and how intense we are.  It gives them an opportunity to play with us and help us out a bit.  I think it’s great for golf, said Thompson.

The event also marks the first standalone event for the Ladies European Tour (LET) in the US giving a chance for Solheim Cup stars from the USA and Europe to team up together.

“It’s great to have top notch LET players coming here to play with us. I got paired up with Laura (Davies) in London and it was so much fun.  I was middle of the pack of getting to pick and she wasn’t picked and I was like, “Laura is definitely on my team.” It was great to play with her and have other great players, as well.”

Using an ‘NFL-style’ draft system, 28 selected captains will again pick their first player, before being randomly allocated a third professional teammate. The fourth member of each team is an US amateur golfer who could make a vital contribution on the course and secure prize money for the professional players, a feat unique to world golf.

The innovative $1million Aramco-backed event sees teams of four battle it out for a share of an $800,000 prize fund, with a $200,000 purse for the leading individual scores over the weekend. As a full LET event, each tournament also carries World Ranking and Race to Costa del Sol – LET’s season-long competition to crown Europe’s leading lady golfer points which was won last year by Denmark’s Emily Kristine Pedersen.

“The great thing about golf is you can play with anyone, any age, handicap or any gender,” said Pedersen.

Big-hitting Dutch star Anne van Dam feels the Aramco Team Series concept will grow in years to come as women’s golf looks to provide more opportunities to grow the game and close the gap between the men’s game with team events.

“Obviously we have a long way to go, but we have to take it step by step.  For me, as a player, every opportunity I have to grow the game, I’ll be happy to help and show my passion for it.  I think the things like this and the Solheim Cup was of course amazing to watch. It showed the game of women’s golf really well.  I think it’s only going to get bigger and bigger in the next few years and I’m just excited to be a small part of it.

“We play the same format every week.  72 holes stroke play. You’re always out there for yourself so I think it’s fun to play with others and have a team vibe going, added van Dam.  The Aramco Team Series – New York will take place at Glen Oaks Club, Long Island, from October 14-16.