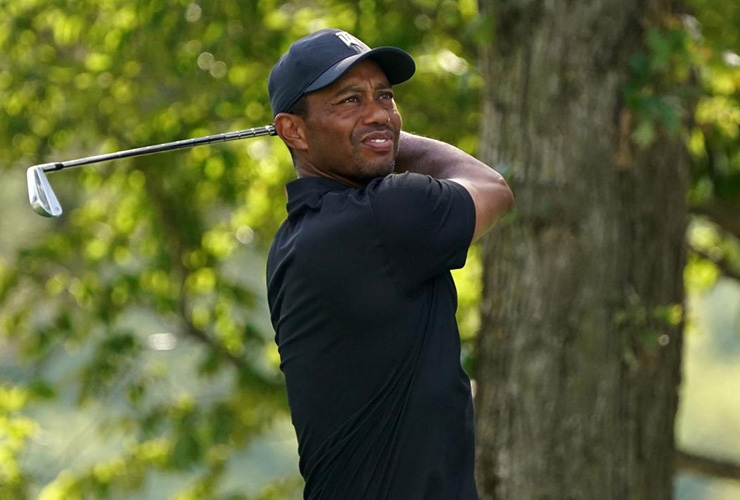 Tiger Woods plays his shot from the eighth tee during the third round of the BMW Championship. (Stacy Revere)

By Daniel Rapaport
Tiger Woods is on to Winged Foot.

Well, not quite yet. Woods still has one round left here at the BMW Championship, but a third-round 72 on Saturday left him at 10 over for the tournament, all but eliminating his chances of qualifying for next week’s Tour Championship. Thus, Sunday’s final stroll around a brutally difficult Olympia Fields layout will offer little more than an opportunity to build some momentum for the U.S. Open, which begins at Winged Foot in just 19 days.

Woods declined to speak to media for the second straight day, surely peeved by a triple bogey on 17 that torpedoed a pretty solid round of golf. Woods got off to a much better start on Saturday, birdieing 3 and 4 to get to two under par for the round. Despite leaving a 12-footer short for birdie at 9, he made the turn in two-under 33, no small feat on a track that has yielded just one 67 all week.

He could not overcome a wayward drive well left on 10 and made his first bogey of the day, but grinded out six straight pars to head to the 17th tee at one under for the round.

What followed was a rapid disaster, the kind that loom like landmines on courses as difficult as this one. Woods fanned a driver well right into water, then had to drop well short of the fairway because the ball crossed into the hazard way back toward the tee. From there, he tried to muscle a fairway wood but the rough grabbed the hosel and shut the clubface, sending his third shot bounding toward the 18th tee. A punch out from there trundled through the green and he was unable to hole a five-footer for double. A round-killing, triple-bogey 7. A joyless par on 18 sealed the round of two over.

It wasn’t the low-low round Woods needed to claw his way back into contention for a top-five finish, which is what he needs to get to East Lake. And yet, Saturday’s front nine was the best Woods has played all week. Most encouraging was his short game, which has looked a bit shaky in his four starts since the tour’s COVID hiatus. He started the day with a flop shot to save par on 1. He had a terrific up-and-down from a gnarly lie just over the fifth green, a good one from the bunker short right of 12 and another from a bad spot right of 14. Woods also looked generally comfortable on the greens, which the stats support—he picked up strokes on the field putting for the first time all week.

Woods likely has just one more round in this strange, truncated 2019-’20 season. Surely he wants four more after that, but he could not ask for much better U.S. Open preparation than another competitive round on a U.S. Open-ready course.