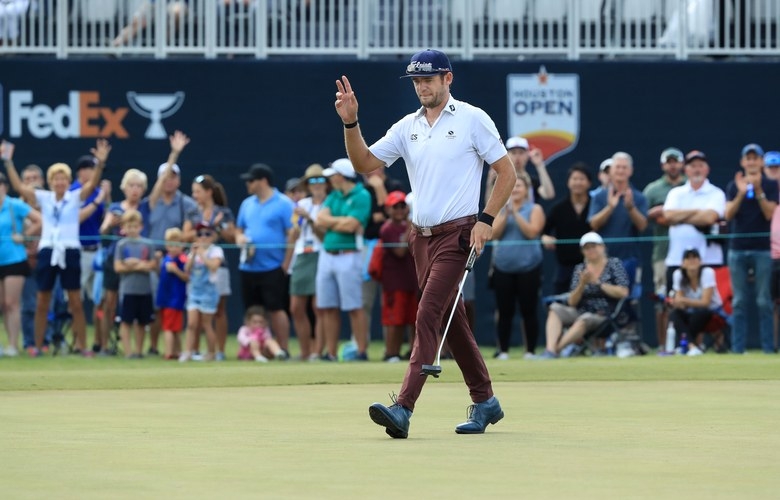 By Christopher Powers
It was only his 33rd start on the PGA Tour, but Lanto Griffin’s road to his first win on Sunday at the Houston Open took much longer than that. That’s why he couldn’t help but break down, bury his head in his caddie’s arms and cry tears of joy after the final putt had dropped.

Griffin credited his good friend Willy Wilcox, among others, for helping him get to this point.

“Just my entire team, but Willy was huge, I learned so much on the mindset that you don’t have to win,” said Griffin, who caddied for Wilcox five years ago while he was still finding his way as a professional. “If you put all the pressure on yourself to win, that can backfire.”

Griffin began the day with a one-shot lead and ended it with a one-shot lead, shooting a three-under 69 at the Golf Club of Houston to edge out Mark Hubbard. His gutsiest moment of the day came at the final hole, where he intentionally played away from the water and drove it into the right rough, then found the green and two-putted from 60 feet to secure the victory.

“I felt eerily calm, I really did. I wasn’t that nervous. Where I hit it [on 18] was pretty much dead center of the fairway for me, I’m pretty good out of the rough and I just knew if I make bogey I have a job next year, and I just wasn’t going to put the water in play. I knew the angle to this pin was fine. I’m just so relieved it’s over.

“I played really solid, proud of the way I hung in there. I just felt calm, I don’t know why, but, it’s pretty surreal.”

Tying for second with Hubbard was Scott Harrington, whose feel-good story came to light this past summer as he contended at the Korn Ferry Tour’s regular-season finale.