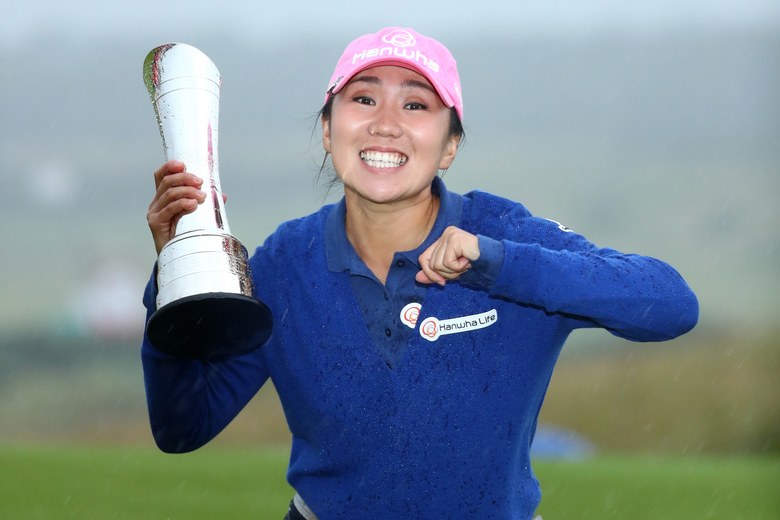 By John Huggan
Call it redemption. Or at least cathartic. More than five years after missing a 14-inch putt that would have won her the 2012 Kraft Nabisco Championship, In-Kyung Kim has her first major championship victory, the Ricoh Women’s British Open. At last, the specter of that horrifyingly inexplicable lapse has been banished. At last, the diminutive Kim can move on, her career now defined by something other than a moment of golfing madness.

It has taken her a while though. Before “the putt,” Kim racked up as many as eight top-10 finishes in the five majors that constitute the female Grand Slam. Since then, and before this week, she has been in similar contention on only three occasions. Twice as often, the 29-year-old South Korean missed the halfway cut.

Now though, all the close misses and one particular miss from close-range can be consigned to Kim’s personal rubbish bin. Especially as her maiden major win was achieved in a dominant style reserved for only a special few. Six-strokes ahead after a brilliant third-round 66 compiled in the worst of Saturday’s squally weather, the now seven-time LPGA champion strolled round the Kingsbarns links in 71—15 pars, two birdies and one bogey—to win by two strokes from Jodi Ewart Shadoff.

“I cannot describe my feelings,” said Kim, who has now won three times on the LPGA since the beginning of June. “I just tried to have some fun, but it wasn’t fun on the back nine. I got really inspired playing here in Scotland. So many people come here just to play golf and I feel so lucky. I didn’t have too much fear and just gave my best.

“The birdie at the first was a bit lucky, but I hit some really great shots today. I almost cried when I won, winning is great. It’s been a long process to get over 2012. A lot of people helped me. Now I enjoy playing golf again. What it did teach me is to to give the same effort to every shot, even the shortest of putts.”

It was as smooth as that sounds. Only briefly did any of those who might have imagined themselves challengers get close enough to even remotely threaten the leader. Best of those was Ewart Shadoff, whose eighth birdie of the day at the 17th took her to 16 under par and two back.

“I didn’t think starting the day that I would have a shot,” said the 29-year old Florida-based Englishwoman. “I had a great stretch in the middle of the round to get me going. My plan at the start was just to take the opportunities when I got them and that’s what I did.”

Michelle Wie almost matched that feat. After a stunning outward 30, the American’s seventh birdie of the day at the 12th left her four behind before a disappointing finish ended her slim hopes.

In truth, for all that the likes of Wie, Lexi Thompson, Stacy Lewis and Ewart Shadoff performed with something akin to distinction over the final 18 holes, each shooting under par—their play represented nothing more than skirmishing for the minor places on the podium. And through it all, Kim went along serenely. Par after par, with the odd birdie thrown in, just to break any monotony.

Indeed, not once did soon-to-be champion look to be in any kind of real trouble, an early birdie at the par-3 opening hole, where her tee-shot finished 18-inches from the cup, quickly displaying the lofty level of her confidence. And no wonder. When Kim eventually did make a mistake, the three-putt bogey she recorded on the ninth was her first in 44 holes. Just one more impressive statistic that provided her pursuers with little or no encouragement.