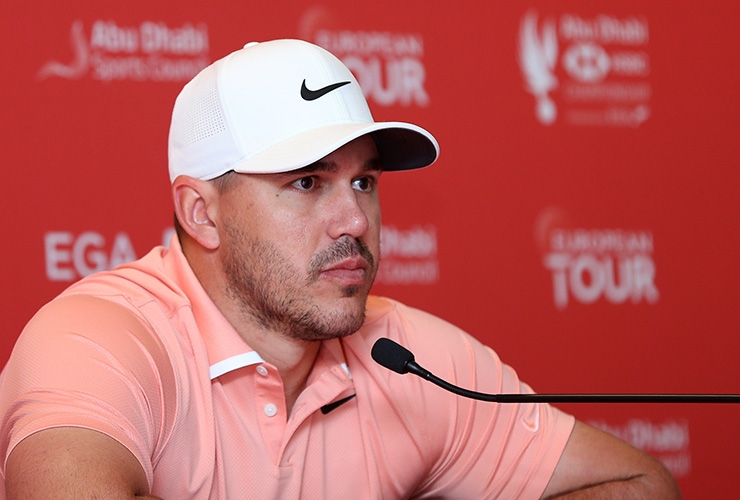 Francois Nel/Getty Images
Koepka fronts the media ahead of the Abu Dhabi HSBC Championship on January 14, 2020.

By Kent Gray
His troublesome left knee might still feel a bit alien but there’s clearly absolutely no damage to Brooks Koepka’s winning mentality. If anything, the world No.1 has turned up to the $7 million Abu Dhabi HSBC Championship with an even more ruthless will to win, driven by a desire to make up for lost time.

The 29-year-old American will tee it up in a competitive round for the first time in three months in Thursday’s opening round at Abu Dhabi Golf Club with a reconstructed left peg after a slip at a PGA Tour event in Korea on Oct. 18 sent him to the sidelines.

“When you have something you love and it’s taken away from you, I think it makes you appreciate it more and really enjoy being out here,” Koepka said.

RELATED:  After being beaten by Josh Hill in a partial practice round, Brooks Koekpa’s praise of the MENA Tour phenom is real

“I mean, I miss the competition. I’ve missed showing up to an event preparing for something because I haven’t had anything to prepare for. When you have three months off, it’s not fun.

“I’m just excited to hit balls. Last year, there wasn’t much practise. I just couldn’t do it with my knee. I think everybody saw it on my team towards the end of the year. I couldn’t get on my left side. I couldn’t do things. Couldn’t squat down in a bunker. I struggled to get down and read a putt. You know, thankfully that’s in the past now.”

Koepka somehow managed to successfully defend his PGA Championship title at Bethpage Black last month and go on to capture the WGC-FedEx St. Jude Invitational two months later despite struggling with the knee. He had stem cell treatment and all appeared okay until a slip forced him to withdraw from the second round of CJ Cup @ Nine Bridges.

It’s been a journey these past 3 months rehabbing my knee but it’s coming along & I’m ready to get back out there healthy for a strong 2020 ? pic.twitter.com/oIFunY7wO0

“I’ve had problems with it since March. Dealt with it the whole year, all the way till — I had stem cell done on my knee and it felt fine all the way through Vegas, all the way to Korea. Everything felt good. And then in Korea, just slipped, and you know re-tore it and the kneecap had moved into the fat pad, which, that’s excruciating. It’s a lot of pain. It’s not fun,” he said.

“I’ve been trying to make sure everything feels right, and it does not feel like my right knee, I’ll be honest with you. It probably won’t for a while. But it does feel stable, which leaving Korea and all the way up to about a month and a half ago, it just didn’t feel stable. It felt like it could go either way. It could go left, out, back, it could go anyway.”

Just like last year, Koepka won’t allow the injury to be an excuse this week.

Were you operating 100 percent at all in any of last year’s majors?

“No. But I don’t think anybody’s ever operating at 100 percent. I think that’s a rarity in sports. I mean, especially with how much twisting and turning we do — everybody’s dinged up a little bit. Nobody wants to hear an excuse.

“I’m not going to come out and tell you I’ve got the sniffles or tell you my knee hurts. Just get on with it and go play. I mean, I won with it, so I don’t see any issue with it.”

After much and on-going rehab in the gym, Koepka started hitting balls again just before Christmas. Thankfully, it seems the injury, a biggie for a right hander given the loads on the left side, hasn’t changed his power game any.

“Everything felt good. Speed was the same. We were hitting on TrakMan and my numbers were exactly what they were the day I left.”

Which leads us to this week’s Rolex Series event where Koepka will look to improve on his T-9 last season after missing the cut in his only other appearance in Abu Dhabi in 2014.

With the majors, the Tokyo Olympics and the Ryder Cup in a crammed year, what are you most looking forward to Brooks?

“I think we know all four tournaments that I’m looking forward to. I think that’s pretty obvious. That’s what everybody gears their year around,” he said.

“You’re trying to get in the swing of things to start it off, obviously. The way I see it, that’s [the majors] what everybody is remembered by. You guys are better at stats, but we can all sit here and tell you how many Arnold Palmer, Tom Watson, how many majors they won, but I don’t know how many tournaments they won.

“I think other than Tiger, because he’s close to the [PGA Tour most wins] record, but the majority of the guys, you can’t tell me how many PGA TOUR events or events they won. You’re remembered by your majors. That’s where my focus is, trying to play well there.”